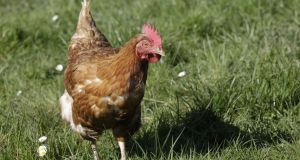 I thought her hens were very agitated, and more aggressive than the average hen in west Cavan, which I suspected was the result of too many burgers. Photograph: Pascal Lachenaud/AFP

Many years ago I met a musician who played in a Dublin pub; a woman in her late 20s, she kept chickens up in the mountains. She was a fiddle player and had a cottage with dozens of little red- and white-feathered hens outside. They slept in the trees and in a shed, and a broken down car that she once drove around Dublin before she fell out with her partner and headed for higher ground.

But she had no money. The recognition of traditional arts as the central pillar in the artistic soul of Ireland had not yet dawned. Musicians were paupers, bards, troubadours, who clung to their uilleann pipes, fiddles and come-all-ye songs with tenacity, but got little in terms of remuneration.

My friend relied on part-time jobs and ham sandwiches, and her chickens dined on leftovers she gathered at night before coming home from her shift in the kitchen of a local hotel.

I thought her hens were very agitated, and more aggressive than the average hen in west Cavan, which I suspected was the result of too many burgers

In those days hotel discos couldn’t get a liquor licence after midnight unless they served a meal. So at 11.45pm every ballroom in the country took a break for 20 minutes and switched on fluorescent lights which killed all but the strongest of romantic liaisons. Revellers queued up for burgers or chicken curry, dished out from some hole in the wall that connected with a kitchen.

Only the hardened drinkers remained at the bar clutching their drinks, and standing in puddles of stale beer.

West Cavan was a refuge of civility back then: there was no draught beer, never mind curry chicken, in the local bar, although Rose, the proprietor, often made magnificent bacon sandwiches for everybody just before we went home. And instead of heading for a discotheque, we usually headed for some house where a few couples might be sitting in the kitchen with a naggin of whiskey, listening to an accordion player or a few songs and recitations.

In moments of extreme exuberance, “half-sets” were danced and adult couples bumped and skittered about the tiny kitchen like confused bees in a jammer. But Glangevlin folk were proud of their dancing; when an Irish-language college was established in the region in 1921 an inspector noted that the standard of dancing in the locality was good, and that the Irish spoken was of a very high quality.

Many years later, I touched the tail end of that beautiful tradition which had been practically finished off by emigration in the 1950s.

My musical friend too lived in the mountains, near Dublin, where she worked in the hotel and often took a full bin bag of cold burgers and soggy chips home with her, for the hens in the trees the following day; or at least for those who survived the prowling fox of the night.

I thought her hens were very agitated, and more aggressive than the average hen in west Cavan, which I suspected was the result of too many burgers. After all, it was widely accepted that urban teenagers had a ferocious propensity for deviant behaviour, and there were numerous studies which linked anti-social behaviour with poverty and a poor diet. The hens, I suggested, might just be as stressed out as the glue-sniffing Bugsy Malones in the urban wastelands.

“My hens are as calm as myself,” she declared. But I said nothing further, because to be honest she was the kind of woman who could play polkas with more ferocity than a 16-year-old cantering a horse up the main street of Killorglin on the night before the Puck Fair.

The artist made no comment. But she never gave the hens a burger or a single curry chip again

There were poultry instructors at that time, who went about the countryside assisting rural folk in the management of poultry and the strategies required for ensuring financial success in a small business.

On one occasion an instructor arrived at the cottage and inquired as to the chickens. The musician said they were fine except that they didn’t lay any eggs.

“Maybe they’re too terrified of the fox,” the musician suggested.

“Maybe they’re too fat,” the instructor replied. “It’s no wonder they can’t lay. You’re feeding them far too much.”

The artist made no comment. But she never gave them a burger or a single curry chip again. In time they laid eggs with yokes as yellow as the sun, and she composed a jig called the Poultry Instructor. She’d sit in the shed and play it to the chickens. I too learned it, and I can still play it; which I suppose is all that remains of our long-ago love.

I watched my dad’s funeral by webcam from France
9