Michael Harding: The world was never this quiet in my entire life 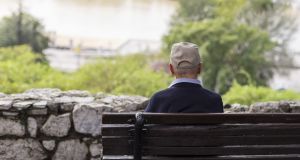 “I feel I have to keep the house tidy,” the little jockey confessed. “Because she used to keep it so clean and neat.”   Fragmented sentences rose from silence and into the wind, and then fell back again into the silence.

One day in Carrick-on-Shannon I saw two old men sitting on separate benches near the river. The first man was lugging his hip along with difficulty, and sat down exhausted on the nearest bench.

The second man arrived a few moments later; as small and wiry as a jockey, with a baseball cap sheltering his eyes. He sat on a second bench at the appropriate social distance.

“I hear you can get the virus on public benches,” the first man joked.

He spoke towards the river. Then the man on the other bench said;

“They have it in Cavan, but they’ll give it to no one.”

He too spoke to the river.

Like characters in a Beckett play they were bleak. They didn’t laugh. Their jokes were not funny. And each contribution was followed by silence. It wasn’t what they said that absorbed me. It was the silences between each comment.

“I lost my wife a month ago,” the big man said. “She died before the virus. I’m glad she’s not here to see all this.”

It turned out that the second fellow had been widowed just before Christmas; and that changed everything. The strangers continued, in single disjointed phrases, to share the pain of losing their loved ones.

“I feel I have to keep the house tidy,” the little jockey confessed. “Because she used to keep it so clean and neat.”

Fragmented sentences rose from silence and into the wind, and then fell back again into the silence.

I tried to hear the river. I tried to listen for some car in the distance heading for Dublin. But I could only hear the wind, and the muffled and strangled grief that was embodied in their speechlessness.

Although it’s not just grief that has been amplified; the virus has made everything else more intense as well. Colours are deeper. Sounds are bigger. And even silence is not an emptiness anymore. It’s quieter and richer.

The world was never this quiet in my entire life. Not even when I was a child on Christmas morning, walking in the snow around the golf course on the edge of Cavan town. Not even in Mongolia crossing the empty land in a jeep full of holy monks who didn’t do much talking from one day to the next.

It was never this quiet even in the empty churches and cloisters of my youth where I first learned to pray.

In Maynooth in the early 1970s, hundreds of clerical students would cram into the main chapel every Sunday morning to sing their hearts out.

But on Holy Week they went silent. Everyone went on retreat; everyone went into a time of isolation and reflection. The cut stone arches and vaults and corridors fell silent.

The retreat master explained that on Good Friday the Christian world held its breath; Christ was dead, really dead, he said; lost in the oblivion of a burial shroud.

Back then we believed in a realm of non-existence which was made visible in the liturgies of the church; a dimension beyond space and time, that mattered for us: A ground of being that held the universe, like a mother might hold a new born infant.

But in the dead space between Good Friday and Easter Sunday that dimension went dark. God was off-line. No word escaped the silence that fell on the cloisters and the corridors and the refectory with devastating elegance.

Those retreats opened silences inside my own psyche and allowed me for the first time to access the underbelly of my own murky unconscious mind.

Not that I would have used terms like “unconscious” or “mindfulness” back then, to describe what for me was just prayer. But back then things were different.

Sometimes the virus feels like a darkness. And grief seeps up out of the ground. But yet the garden where I pass the time in the hills above Lough Allen was never as beautiful, or never as peaceful as it appears this spring time.

I’m astonished by small things; the budding trees, the goofy gait of a pheasant, or two crows on an oak branch, wobbling in the wind as they sing their lamentations in the evening; like cowled monks, or like old bewildered men.

Keep our money if you must, Ryanair. We’d rather lose our airfares than board our flight
5

‘I felt something furry move under my hand. Man alive, I am terrified of rats’
Real news has value SUBSCRIBE