Will there be friends in the garden again when the fields are white with daisies? 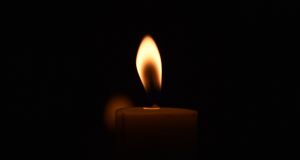 “When I light a candle . . . it is as if I am standing before a single flame with strangers at my side, sharing the same gentle light in the darkness.”

The first two weeks were the worst. It took time to adapt to the new situation. I wasn’t in self-isolation, although that wouldn’t worry me anyway; I’ve been half-isolated for years. In the afternoons I dozed by the stove and dreamed of Yoda.

“Be careful,” he warned. “If you are entering a room alone.”

“Only what you bring with you,” Yoda replied and chuckled.

Sometimes I woke in the middle of the night and scanned the newspapers on my phone for fresh catastrophes.

Just before the virus closed in, I was at a funeral. A woman who had lived a long life. Her husband said: “Her dying was like she had gone out to sea.”

Palliative care workers tend to avoid flowery language like that.

“Her heart has stopped,” they said as gently as they could. They didn’t say she was gone out to sea. But that’s what her husband said; he repeated it at the funeral.

“She’s gone out to sea,” he whispered, during the Mass.

I tried to write him a letter afterwards. I wanted to offer my condolences. But I never posted it.

And when the virus arrived I sat down to compose another letter, this time to myself. I wanted to express my grief at the loss of so much; needless to say I didn’t post that either.

The virus has silenced me, even though I didn’t get it yet. Sometimes I stand for ages at the window staring out at the desolate fields and the deserted road.

“What are you doing?” the beloved asks.

But I can’t tell; I feel like a dazed rabbit that has been hit by a tractor and just managed to get home to his burrow.

“And why are you wearing that peaked cap in the kitchen?” she wonders.

The fact is that my peaked cap has begun to stick to my head. It happens to a man when he turns 65; a mysterious glue of psychic attachment prevents the cap from coming off, even when he is eating his dinner. Some men are stuck to their caps for so long that if they took them off nobody would recognise them.

“Take it off,” the beloved said one morning, suddenly exasperated.

“Take what off,” I wondered, thinking she might have sex on her mind, but she only meant the cap.

In those first few weeks I kept wondering what would become of us. How would we be transformed by this thing in the air.

“Will children ever play on the beach in Bundoran again with the same innocence as I did once?” I wondered. “Will there be friends in the garden again, hugging and embracing, when the fields are white with daisies?”

I was so frightened in those first weeks that I began lighting a candle in the evenings, and I remained alone in my room for hours, even though I wasn’t in isolation.

“Go to your room,” the desert monks used to say, “and your room will teach you everything.”

So I did. And I made a shrine; a focal point that opened like a portal into the soul of the world. I lit a candle and the icons glowed behind it, and I watched the flame flicker on the faces of every buddha and all the Christian saints.

It was as if everyone in heaven had come together; Jesus, Mary, Buddha, Shiva, Moses and all the prophets of Islam; they were all working together to comfort me.

And what does it matter if my icons are Christian or Buddhist or just family photographs; they’re all vectors of hope and love in a dark time.

When I light a candle I imagine someone else is doing the same thing at the same moment. It is as if I am standing before a single flame with strangers at my side, sharing the same gentle light in the darkness. And there’s no need to call it prayer; it’s a human gesture, an act of faith, without any particular object.

When I stand at the window during the daylight hours, I see and I hear the world outside; the beautiful blackbird and magpie and all the little finches on the branch of a tree. One day I even saw a fox, exhausted, crossing the lawn.

But when I light a candle at twilight, I see and I hear the world inside; and then I know I am not alone.