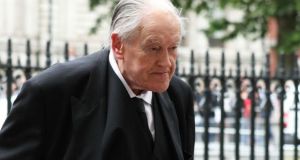 A file photograph from June 2019 of Robert Armstrong. Music mattered most to him outside his life in Whitehall. Photograph: Yui Mok/PA Wire

Robert Armstrong, Lord Armstrong of Ilminster, died on April 3rd at the age of 93. He was private secretary to two British prime ministers, Ted Heath and Harold Wilson, in the 1970s, and secretary to the cabinet for eight years under Margaret Thatcher.

During the 1970s and 1980s he played an important part in Anglo-Irish relations. At critical points of the Northern Ireland conflict his was a positive and influential voice at the highest level of British government. As Heath’s private secretary, he advised against internment in Northern Ireland in 1971. After the collapse of the Sunningdale Agreement in mid-1974 when Heath’s successor, Wilson, was toying with the possibility of early British withdrawal he was deeply disturbed, like his Irish counterpart Dermot Nally, and he advised strongly against a step that could, he believed, cause chaos in the North.

His most decisive contribution, which set Anglo-Irish relations on a wholly new course, came over the two years 1983-1985.

In personal discussion during meetings in Dublin and Oxford, in September 1983, an Irish official Michael Lillis, with the approval of then taoiseach Garret Fitzgerald had explored with David Goodall, Armstrong’s deputy, the possibility of a role in the government, security and judicial systems in Northern Ireland as a counterpart to acceptance by Dublin of the status of Northern Ireland.

Armstrong reported this to Thatcher and recommended that the approach be taken seriously. At a summit in Chequers in November 1983, the taoiseach took matters further and tried to convince her that the growing alienation of the nationalist community in Northern Ireland made inaction dangerous. She was reluctant at first but she authorised Armstrong as cabinet secretary reporting directly to her, to open exploratory contacts with Irish cabinet secretary Dermot Nally.

This led to nearly two years of intensive negotiations between a small group of British civil servants led by Armstrong and their Irish counterparts led by Nally and including Lillis and including secretary general of the Department of Foreign Affairs Sean Donlon and the Irish ambassador in London Noel Dorr. The negotiations were difficult – sustained at times only by the creativity of Armstrong and Goodall in countering objections from a reluctant Northern Ireland Office. The talks survived the IRA’s Brighton bomb attempt to murder Thatcher in October 1984 and the politically damaging effect of her brusque ‘out, out, out’ rejection of the New Ireland Forum Report a month later. They were carried on in secrecy and against a background of continuing violence in the North. They stretched over nearly two years and were followed closely by relevant ministers and particularly by the taoiseach and the prime minister whose own intensive discussions at formal and informal summits gave further directions for each stage of the talks.

The outcome was the Anglo-Irish Agreement, a formal international treaty signed by the two heads of government on November 15th, 1985. It was of historic importance – a practical recognition that there was an “Irish dimension” to the Northern Ireland conflict. It recognised a right for the Irish government, as surrogate voice for the nationalist community, to offer input to the governance of Northern Ireland by the British government for so long as direct rule continued. It established institutions through which to do so: an Anglo-Irish Intergovernmental Conference meeting regularly at ministerial level and an Anglo-Irish secretariat in Belfast through which issues could be raised and representations channelled on a day to day basis.

In October 1985 Armstrong and Sean Donlon travelled together to Washington and in an unprecedented joint approach secured the support of US president Ronald Reagan and speaker Tip O’Neill. One outcome was the International Fund for Ireland, funded by the US, the EU, Canada, Australia and New Zealand, which has disbursed nearly €1 billion for economic and social development in Northern Ireland and the six southern border counties.

The Agreement was resisted strongly at the outset by unionists and rejected, too, by republicans. It did not end conflict in Northern Ireland but it established for the first time a structured framework for cooperation between the two governments. And it had other positive effects over time. Though neither would readily admit it, unionists, finding they could not bring it down, were more open to some new agreement to replace it; Sinn Féin and the Provisional IRA, through the Hume-Adams dialogue, were more open to progress by political means. In the 1990s a re-think by those involved in violence on both sides made the peace process possible and led on to the settlement achieved in the Belfast Agreement in 1998.

Armstong is remembered by the three surviving Irish officials who worked closely with him – Lillis, Dorr and Donlon – for the integrity and concern, the patient commitment and the drafting skills which he brought to negotiations. “When we ran into difficulties as we often did, he was always able, with the help of his colleague Goodall, to find a way around an obstacle which would meet the requirements of both sides and be acceptable to our respective prime ministers. We think it most unlikely that any other senior official in his place would have earned the trust of Thatcher as he did or been able, as he was, to maintain her confidence in the rightness of a course she had embarked on initially with some reluctance,” the three told The Irish Times.

They participated in thirty-six negotiating sessions on one or other side of the Irish Sea over that two-year period in the mid-1980s. “Through intensive work during the day – and lively exchanges and argument, heated on occasion, over dinner in the evenings – we came to know each other well, better perhaps than British and Irish civil servants have ever done before. We maintained good working and personal relations but each side always represented the position of its government with complete integrity.

'For some of us on the Irish side the working relationship with Robert and the late David Goodall, developed into a friendship which endured for nearly forty years'

“For some of us on the Irish side, including the late Dermot Nally, the working relationship with Robert and the late David Goodall, developed into a friendship which endured for nearly forty years.” they recalled.

Armstrong was reticent about the importance of his own role. But he knew the importance of the agreement. At a “witness seminar” in UCD in 2006 (as recorded in a new book edited by John Coakley and Jennifer Todd) he called it “a turning point in relations between the two governments” without which Tony Blair and Bertie Ahern “wouldn’t have got the Belfast Agreement”. He would never say it himself but without Robert Armstrong, there would have been no Anglo-Irish Agreement in 1985.

According to Margaret Thatcher’s biographer, Charles Moore, “one of her skills…was to permit others to do things of which she in theory disapproved”. It might be more accurate to say she did so only when she came to accept in practice that something was necessary and trusted the person who advised that it ought to be done.

Born in Headington, Oxford, Robert was the son of the organist and eventual principal of the Royal Academy of Music Thomas Armstrong, and his wife, Hester (nee Draper). He was educated at the Dragon school, Oxford, at Eton, where he was a king’s scholar, and at Christ Church, Oxford, where he studied classics and philosophy.

His education was a traditional route to Whitehall’s corridors of power via the Treasury – the fact that he had studied classics, rather than economics, was no obstacle to a successful career there. Far from it, and it was at the Treasury, the most influential of government departments, where Armstrong first made his mark, starting as an assistant principal in 1950.

It was during the Thatcher period that Armstrong’s name became known around the world when, in 1986, he appeared as a key witness in the so-called Spycatcher trial, as the British government attempted to prevent publication in Australia of the memoirs of Peter Wright, a former MI5 officer.

In the witness box in the Sydney court, Armstrong came out with a phrase that captured headlines around the world. The phrase was “economical with the truth”.

He pointed out that the phrase was not his own – it was first used by the philosopher Edmund Burke, he told the court. But it was too late.

Armstrong and Butler were also both members of the UK section of the Trilateral Commission, sometimes described as a private discussion group for people who run the world

Thatcher did not always accept his advice. He told her that Jimmy Savile should not be given a knighthood on the grounds, he felt, that “things were not quite what they should be”. He noted that Savile had made no attempt to deny the accounts in the press about his private life, that he had slept with numerous women while taking part in charity events. Armstrong’s instincts turned out to be correct.

He was knighted in 1978 and made a life peer 10 years later, after he retired, sitting in the House of Lords as a cross-bencher. Also, in 1998, he was appointed chair of the Victoria and Albert Museum trustees, where the deputy was his Oxford contemporary Michael Butler, former ambassador to the European Community. Armstrong and Butler were also both members of the UK section of the Trilateral Commission, sometimes described as a private discussion group for people who run the world.

He was appointed non-executive director to many companies, including BAT Industries, the bankers NM Rothschild and Sons, Rio Tinto, Shell, Lucas Industries, Carlton Television, and the Bank of Ireland.

But it was music that mattered most to him outside his life in Whitehall. He was secretary and then a board member of the Royal Opera House from 1968 to 1993. He once said he tried to write his cabinet minutes in sonata form, with an exposition, development section, recapitulation and coda.

In 1985 he married Patricia Carlow, and she survives him along with his two daughters, Jane and Teresa, from his first marriage to Serena (nee Chance), which ended in divorce. – Additional reporting by The Guardian

Róisín Ingle: My body has seized up while in lock down
2