I finally tackle the tumbleweed of my life and clean something

Hilary Fannin: A dusty souvenir boat transports me to an island in the Pacific 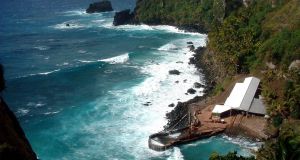 The wooden longboat, carved by an islander, is equipped with miniature pulleys and hooks and a mast rigged with a dusty sail. It comes replete with a dozen hand-crafted tapering oars, wrapped up for years now in yellowing tissue paper and stored inside the hull. The boat, painted white, is landlocked, in dry dock on top of the living-room shelves, beside some framed family photographs.

The frames, equally dusty and mostly ignored, are largely inhabited by the dead, caught in the ordinary acts of living: mid-stride on a trip to a wintry zoo, smiling at a woolly grandchild, on a swing in some park or forgotten garden – casual portraits, remembrances of a generation all departed.

I’m usually too preoccupied, or busy or lazy or stubborn, to dust stuff. Sometimes, though, I take the longboat down and blow the spores away, and remind myself to remind myself to find someone with the patience and skill to fix the loose rigging, to mend the collapsed sail that has concertinaed in on itself like an arthritic dancer.

The boat was a gift to my husband when he was a boy, brought home from Pitcairn island by his father, a documentary film-maker, after a sojourn on the tiny Pacific island, making a film sponsored by British Petroleum.

The mutineers’ first action on the island, thousands of miles from another living soul, was to set fire to the Bounty

The BP tanker that brought my late father-in-law to Pitcairn in 1962 also delivered a generator and barrels of oil to that inhospitable place where, in 1790, nine mutinous English sailors from HMS Bounty and 18 Tahitian men and women, led by Fletcher Christian, had settled.

The mutineers’ first action on the island, thousands of miles from another living soul, was to set fire to the Bounty lest any of their number be tempted to escape self-isolation. By 1800, within 10 years of arrival, all the men on Pitcairn had hit the (home-brewed) bottle and were dead, mostly having killed each other or themselves – bar one, a teetotaller. (So let that be a lesson to you.)

The film is atmospherically shot, the Pacific a great gnawing mouth on which the longboats that provide the only access to and from the island crash around like spat-out morsels.

Men row out to a tanker to get the generator, then carry it, barefoot, up the 250ft cliffside on their shoulders. Women in Sunday dresses sell woven baskets and carved trinkets. Those too young or too old to manage the oars wait together on the hills above.

A bored child plays with a tethered tarantula, taunting it with a stick. An old man closes his eyes against the intrusion of the tanker’s unwanted delivery of cameraman and film crew. A little girl marches around in her pristine frock, looks at the camera with playful bravado, then runs away into shadow.

The islanders, who live in an area of two square miles, are quite coolly observed. The commentary has the slightly imperious tone of a Pathé newsreel. “Dull idleness is interrupted by sudden desperate hard work,” the suave narrator states as the men haul the longboats out of the death-cheated sea.

Then, as the tanker departs and the islanders, a sober crew of Seventh-day Adventists, face the horizon and sing a song “of isolation and regret”, he conjectures that it cannot be easy “to endure the endless empty calendar of life on a rock in the middle of an ocean”. (Yep, you can say that again, sweetheart.)

The Pitcairn People was made more than four decades before the island was convulsed, in 2004, by the trial of seven men for sexually abusing children, exposing the lives of the Bounty descendants in a different and more grievous light.

Anyway, I mention all this because after a month indoors singing Happy Birthday while I wash my paws, and of snaking queues around the supermarket, of truncated walks and roaring at the cat for harassing the blue tits, I decide to tackle the tumbleweed of my life and clean something.

I start wondering what the seventh generation of Bounty descendants, in New Zealand and Australia, are doing in the lockdown

I begin by taking down the longboat and the old photographs, and that is the end of that. I start reading about Pitcairn and I find the old film on YouTube. I start wondering about the dead and the dispossessed, known and unknown, and what the seventh generation of Bounty descendants, in New Zealand and Australia, are doing in the lockdown. I somehow doubt they’re perusing souvenir currachs, but you never know.

I lift the boat’s palm-sized mainsail, blow away the dust and imagine her gliding into the dark ocean and never turning back.

Hilary Fannin’s novel, The Weight of Love, published by Doubleday Ireland, is out now