Michael Harding: I lock myself in, strip naked and take a clipper to my hair 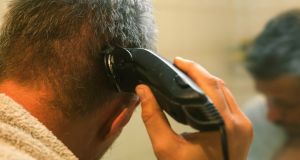 Cutting hair is the only masculine thing I do, although the beloved dreads the sight of me when the operation is done. Photograph: iStock/Getty

I met a man outside SuperValu last week as I was going in to buy groceries. He was standing at the doorway staring at a dog that was sitting under the shopping trolleys, and if I wanted to retain appropriate social distance my access to the shop was blocked. But instead of asking him to get out of the way, I started up a conversation.

“I have no choice in the matter,” he replied, “or so everyone tells me.”

“The Government holds the same view,” I said.

“Yes,” he agreed, “but can we believe the Government? I heard somewhere that the virus was started by feeding dead orangutans to sick babies in order to turn us all into monkeys.”

“Where did you hear that?” I wondered.

“It was on the internet,” he said, and he looked as if he wasn’t sure what the internet might be. I thought he was going to step out of the way but he just changed the subject.

“Isn’t that a lovely dog,” he declared.

And he appeared as happy as a clown in Duffy’s Circus, pointing at the little mutt underneath the stack of trolleys.

I lock myself in my studio, strip naked, sit on a chair and take an electric hair clipper to the top of the head. Conducting the procedure while naked is the easiest way of avoiding hairs infiltrating my Harris tweeds

“Do you think he wants me to get him a trolley so he can go in and shop?” the man wondered.

Absurdity constitutes a large portion of conversation in rural Ireland; country people are masters of the surreal. Reality itself is never tolerated.

“I think he works for SuperValu,” I said. “He counts the customers.”

When I got inside the shop eventually, I noticed a neighbour in the dairy aisle, and I bade him good morning.

“Were you in an argument with a door?” he wondered.

I didn’t know what he was talking about until he pointed at my head. Then I remembered I had given myself a haircut the previous night. Cutting hair is the only masculine thing I do, although the beloved dreads the sight of me when the operation is done.

I lock myself in my studio, strip naked, sit on a chair and take an electric hair clipper to the top of the head. Conducting the procedure while naked is the easiest way of avoiding hairs infiltrating my Harris tweeds.

I don’t use a mirror, because I have discovered from experience that it’s impossible to shave behind the ears and watch myself in the mirror at the same time. So I prefer to work from memory. Which is why there are often tufts as long as rushes growing behind the ears, driving many women insane, although not in a good way. To be honest the only time I ever see my reflection is on a television screen, and even for me that’s a disturbing experience.

When I was young I had such delicate locks of brown hair that men in certain discreet bars in the midlands sometimes touched the top of my head fondly and wistfully. Those were days when Ireland was not free. When people went about in fear of moral police and intellectual fascists. A time when people had strong opinions about how others should live. A time when the gay community in particular was trapped in a lockdown of merciless self-righteousness that went by the name of Catholic Ireland.

Literary bars were occasionally safe havens for men who needed to closet themselves away in dark snugs if they wanted to experience even the ordinary delicacies of love and intimacy that the rest of the population took for granted.

‘Jesus, Mary and St Joseph,’ the woman at the checkout declared, looking at my shaven head, ‘I didn’t recognise you without your wig’

I remember meeting men in that semi-literary world who were often married and had partners with whom they could never fully rejoice; their nostalgia and self-loathing often resulted in a kind of poetic sentimentality that found oxygen in the world of literature and the privacy of snugs in public houses.

“Jesus, Mary and St Joseph,” the woman at the checkout declared, looking at my shaven head, “I didn’t recognise you without your wig.”

“That’s the lockdown,” I replied, “it makes monks of us all.”

And as I went out the door my friend was still bent over the dog beneath the trolleys.

“Be careful you don’t give that dog Covid-19,” I joked, continuing the surreal banter of our earlier encounter. But he looked at me with a kind of hurt. As if I were making fun of him.

“I’m only trying to make friends,” he said, and I walked away in shame, because it struck me that every lockdown still casts a merciless grip on the lonely heart.