Michael Harding: Though I cheered for Biden, I was more like Trump than I could admit 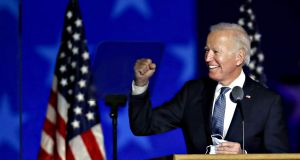 Michael Harding: “I was gripped with excitement, although it was more contempt for Trump rather than any love for Biden.” Photograph: Stefani Reynolds/Bloomberg

There was a man beside me in the hospital who loved Netflix. I knew because when his wife and children spoke to him on Skype, they always talked movies. He never spoke because he had very little movement in his body. His limbs remained motionless beneath the blue blanket. When a nurse propped an iPad in front of him his wife did all the talking, and sometimes she’d say,“Lift your finger if you agree.”

And every time she said, “I love you,” his finger rose to acknowledge her. All his children were in the frame of his iPad, and I could hear them reassuring him of their love. His mates at work missed him, and they hoped he’d be back soon. And sometimes after I left hospital I would wake in the night thinking about him, wondering if he was at home with his family.

I remember another night watching a man in pyjamas heading for the toilet. He was old, but he stood as straight as a rod and used an umbrella as a walking stick. I thought that I was dreaming or that perhaps he was dreaming. Maybe he thought he was walking around his native village. So I asked him if he was okay. “I’m good,” he said. “I just couldn’t find the walking aid.”

Hospital was a territory I perceived as dangerous. Too many unwanted intrusions. I folded my arms and wrapped myself in a dressing gown like it was the Berlin Wall

He too remained with me after I went home. And of course I could never forget the Romanian woman. A small dark-haired lady in the next bed who offered me an orange one day. I instantly refused and then felt ashamed. Her generosity had threatened my privacy. Taking the orange might have entangled me in her kindness, and I didn’t want to encourage that sort of familiarity.

Hospital was a territory I perceived as dangerous. Too many unwanted intrusions. I folded my arms and wrapped myself in a dressing gown like it was the Berlin Wall. But no matter how I tried to protect myself, life in hospital is always about vulnerability and for me that was a learning curve.

When Joe Biden was declared president-elect of the United States I was back home watching CNN in the company of my beloved. Little flames flickered in the stove. We opened a bottle of wine and waited for hours to hear Biden and Kamala Harris give their speeches. But when the beloved went to bed I stayed up and ransacked the kitchen for beer. I was gripped with excitement, although it was more contempt for Trump than love for Biden.

I even watched a movie on Netflix about a hitman called The Irishman. It was as if hating Trump wasn’t enough. There was an emptiness inside me after Biden’s victory, and I needed someone else to fill it. So Scorsese’s movie gave me what I needed: a dark monster that never bends but squirms as he dies. And I felt so passionately about Trump that any amount of alcohol seemed perfectly fine in the circumstances; or so I argued as I opened each fresh tin of lager.

“The darkness has been defeated,” I declared as I entered the bedroom. But the beloved heard nothing. She had been asleep for hours. “Trump has been banished. The light of Biden shines upon us.”

And when I tried to get into bed I fell on the floor clutching a pillow like it was a life raft. Not that I cared. I was so consumed by contempt for Trump, my elation at Biden’s victory, that nothing else mattered.

No matter how much I had cheered for Biden, I was in ways more like Trump than I had ever admitted: terrified of vulnerability, terrified of ageing, terrified of being seen as weak

It was only when I went to sleep and began dreaming that the truth surfaced. I saw an old feeble man in pyjamas walking across a carpark in my dreams carrying an umbrella as a walking stick. I thought it might be Joe Biden. And he turned to me and gazed into my eyes.

“Why are you angry with me?” I wondered.

“Because you were never really on my side,” he replied.

I sat upright in the bed, suddenly aware that a week in hospital had drawn me towards a new threshold. No matter how much I had cheered for Biden, I was in ways more like Trump than I had ever admitted: terrified of vulnerability, terrified of ageing, terrified of being seen as weak.

I couldn’t hide from those simple realities in hospital. But when I came home it was easier to gloat on Trump’s defeat rather than reflect on how the soul constantly needs healing, every bit as much as the body.