Michael Harding: I used to be so smart. Now I’m a complete gobshite

An old and familiar tormenting voice inside my head began. ‘What kind of a gobshite are you?’ it inquired 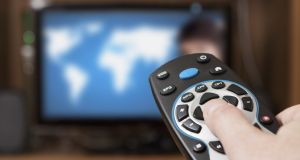 Because I’m a complete idiot, I had come home without the remote control. And thus an old and familiar tormenting voice inside my head began.  “What kind of a gobshite are you?” the voice inquired.

When I was young and lived on the Border there was usually a British army checkpoint on the bridge between Belcoo and Blacklion. Uniformed boys with blackened faces would shout car registration numbers into their walkie-talkies, and roadsigns commanded drivers to turn off their lights when approaching a checkpoint.

“Delta. India. Lima.,” some young boy with a Liverpool accent shouted one night as I was coming across. And then, because I hadn’t turned off my lights, he screamed.

“Turn off your f**king lights, mate.”

I was young and under a delusion that I was extremely smart. So when he asked me where I was going I replied in Irish.

I was making a defiant stand against the forces of the crown and displaying pride in my culture. And when I told my girlfriend later what had happened, she congratulated me for being so smart.

I wasn’t bothered that she had been left standing in the rain, outside a bar in Dowra for an hour, waiting for me.

We drank in various pubs around the Border back then and were smart enough to know which ones stayed open late. In fact we rarely went to a pub before 11pm and even if the pub was closed, the door bolted and the shutters down, we could still gain access. It was all a question of being smart and knowing the alleyway that led to the rear of the building, and knowing that the male toilets were outside in a shed, and that from there it was easy to slip in by the rear entrance.

Drinking late was smart. Playing games with the security forces was smart. And pretending to be fluent in the native tongue just to annoy the enemy was the quintessence of smart-aleckery.

Not that I could ever speak Irish fluently. The few phrases that remained from secondary school had fallen away and, although I nursed enormous nostalgia about the language, the fact is I never used it in any meaningful or sustained way.

Which is why I got obsessed last year with the idea of living in Donegal; it seemed like a last-ditch chance to awaken my Gaelic soul. But then came Covid, and all the lockdowns.

In fact just before Donegal went into semi-lockdown recently, I was looking at my television set in Leitrim with deep dismay, because I couldn’t get TG4 on it. And I had hoped that with TG4 I would be able to learn Irish by Christmas, and then the lockdown would be over, and I’d be up in Donegal blathering away in the native tongue to everyone and anybody.

But the television was purchased in Enniskillen, which, according to the General, is like buying something off a lorry in Manchester, and it refused to download the TG4 app.

Then a friend in Donegal said he had a Sony TV that worked perfectly well with TG4 and I was welcome to it if I could collect it before the county border closed.

“I’ll drive up immediately,” I promised.

And I did, with the windows shut going through big towns, then wheeled around and drove straight home, with the TV in the back of the Corolla. That evening the beautiful TV sat in the front room as I sipped a mug of coffee to recover from the long drive, gazing at the blank screen with quiet anticipation.

But simply because I’m a complete idiot, I had come home without the remote control. And thus an old and familiar tormenting voice inside my head began.

“What kind of a gobshite are you?” the voice inquired, over and over until I lay defeated, depressed and exhausted on the couch.

When the beloved arrived home and viewed this despondent wretch on the sofa with a big television sitting idle on the coffee table she wanted to know who had died.

I confessed what had happened.

“But you can always get a universal remote in town, tomorrow,” she said.

“What’s a universal remote?” I wondered.

“It’s one that works with any television,” she said.

“Is there really such a thing?” I wondered, with astonishment, as if I were contemplating the second coming of Christ.

In fact I found one in an electrical shop the following morning and settled down that evening with the Irish language rinsing my ears, and piercing my soul as a weather woman predicted “oíche scamallach” in the west.

Not that I’m going to learn much Irish by December, I suppose. I’m just not as smart as I used to be.