They told me to put on a gown as short as a miniskirt. Would I get high heels as well? 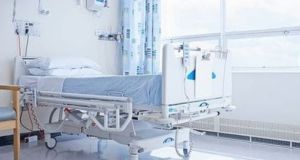 “Their collective chatter shielded me from self-pity and reminded me that being human is the accomplishment of a group rather than an individual.” Photograph: Getty Images

There was nothing seriously wrong with me apart from a bit of heat in the legs and the fact that I couldn’t walk much. But one day in the garden the legs turned to jelly when I was clipping briars with a hedge strimmer and I couldn’t walk back up to the house.

Apparently, it was all to do with arteries and veins, and blood going in the wrong direction. I ended up in Beaumont hospital for the kind of high-tech keyhole surgery that I have only ever seen in movies.

Before the procedure various people attended my bed to take blood samples, check my heartbeat and shine lights in my eyes. They asked my date of birth over and over again. They instructed me to put on a tiny gown as short as a miniskirt with tie strings at the back and stockings so tight that it took two nurses to get them on to my big feet.

“Do I get high heels as well?” I wondered but they explained that the stockings would prevent blood clots. And that put the smile on the other side of my face.

As they wheeled me down the corridor, in and out of various elevators, I watched fluorescent lights on the ceilings passing over me like the light of angels.

Closer to the theatre suites a doctor approached in full green gown, mask and cap, and read me a litany of things that could go wrong with a high-tech spinal procedure.

They swung me from the trolley to an operating table and manoeuvred my head into some kind of plastic brace and I saw various screens floating above me and a nozzle of oxygen coming towards me just as I went unconscious.

I had been reading The Road to Unfreedom by Timothy Snyder during the previous week about the dark practices of Vladimir Putin and so in my dreams Putin appeared as a doctor with a syringe leaning over me. He spoke Russian but I told him he had the wrong patient.

Then I woke up in a high-dependency ward and all the people around me were snoring. It was after midnight.

During the following days, a dark-haired little woman from Romania lay in the bed next to mine. She spent hours on the phone to her family. She propped the phone against a dinner plate when she was eating or else she’d lie on her back with the phone on the pillow. Her laughter was so reassuring as she chatted with her children that I realised her presence was helping me to heal faster.

After a few days I was moved to a room full of men, which didn’t impress me; being stuck day and night with other males felt about as attractive as being incarcerated in the gorilla enclosure at Dublin Zoo. But, in fact, the men also helped me to heal faster.

They talked about divorce, renovating houses, working out in the gym and most especially about their motorbikes. Some of them needed painkillers at night but yet they were cheerful and grateful for every morsel of food and medicine they received. Their collective chatter shielded me from self-pity and reminded me that being human is the accomplishment of a group rather than an individual.

Apart from the cheerfulness of other patients, it is mainly the staff in any hospital who bring about healing: taking bloods, distributing tablets, serving breakfasts, cleaning floors and closing the curtains, sometimes in the afternoons, so that the wounded world can rest.

The co-ordinated fabric of their care makes a hospital feel as busy as a train station betimes but underlying each meticulous intimacy with the bodies of strangers is a quality of compassion that is the mark of their humanity.

One day I overheard two nurses discussing a coffee break at the foot of my bed.

“You take the first break,” one of them said, “You look tired.”

“No,” the second one said. “It’s just that I got no sleep last night.”

Anything is possible. Because every hospital worker has their own story, their own worries and struggles. It’s just that they forget themselves so completely when they’re on duty that nobody notices.

And I never found out what her story was because I was discharged the following day. But I think about her a lot. I think about all of them with an enormous sense of gratitude.