Adrian Martin on opening his own restaurant, loss and how to make tasty sprouts 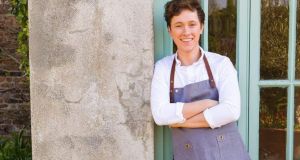 Chef Adrian Martin has has been running his London restaurant, Wildflower, from his apartment in Dublin.

On January 1st, 2020, the Cavan man known as Chef Adrian was anticipating the opening of his first fine-dining restaurant, Wildflower, located in a jazzed-up shipping container in London’s famous Camden Market.

January was spent planning and February saw him travel across on the ferry with his brother and a van full of equipment to kit out the restaurant and kitchen. Wildflower opened its doors in March – and then promptly closed them just seven days later, after the coronavirus hit. The restaurant eventually reopened in July with a reduced capacity. “We were doing 40-50 per dinner; at the moment, with social distancing and all the guidelines and with people being afraid to eat out, we’re now doing eight to 12 people a night,” he says, sighing. “It is what it is.”

Adrian Martin has been running the restaurant from his rented apartment in Dublin since then, liaising with staff via multiple conference calls every day and updating the chef’s manual from afar. It is not how the friendly 29-year-old thought owning his own restaurant would pan out. There was more sadness during the summer, when his grandmother died after contracting Covid-19.

Everything that has happened personally and professionally will make being with family at Christmastime extra-special this year. He will spend a day in Dublin with his girlfriend, model Hannah Corcoran, before heading home to Bawnboy to be with his parents and three siblings – but he won’t be waited on hand and foot by his Irish mammy.

“Mam sits and drinks wine while I do the cooking,” he jokes. “I’ve been doing Christmas dinner since I started working as a chef; I think I attempted it first at 13, and I’ve been doing it since. Sixteen years she has me cooking Christmas dinner! I’d say she’s forgotten how to do it,” he says, laughing, reeling through the list of jobs ahead of him. “Ah no, I love doing it. I do all the prep the day before. My sister will never let me live down the year I forgot the gravy though.”

His plans for Christmas dinner include hasselback potatoes with Parmesan and garlic, sage and garlic roasties and “the creamiest, butteriest mashed potato in the world”.

He is so enthusiastic that he even has me craving Brussels sprouts. “That’s what I think is key to Christmas dinner – focusing on the small elements and getting them right, and getting the flavours right. Mam used to boil sprouts for at least an hour, and they used to be horrible,” he laughs. “But I slice them in a Kenwood slicer, and then I stir-fry them with red onion, sesame seeds, soy sauce and ginger, and they’re really good – they’re much more palatable.” He pauses for breath for the first time in several minutes, taking stock of the mammoth task ahead of him, “I [really] do an awful lot of stuff.”