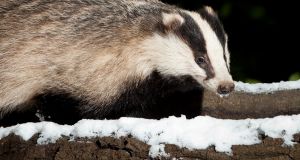 ‘I remember one afternoon when my daughter was young and the snow was dotted with little paw prints and we searched together for any sight of a furry snout.’ Photograph: iStock

The day I returned from hospital I went out to the shed for firewood and found an old pair of boots. The same mouldy boots I sprained my ankle in as I descended from Croagh Patrick in 2009.

And as I gathered firewood I found more remnants of who I used to be. Like the wooden fruitbowl that sat on our breakfast table for years but now lay in broken shards in a box of old radios. And a crate of DVDs destined for a charity shop. And a faded print of blue mountains by Paul Henry that my parents bought in Enniscrone in 1952, and which hung like a precious icon on the wall of our dining room when I was a child. My father’s signature was scrawled on the back, but when I pulled the rotten frame off I saw that it was only a postcard, and my father’s innocence made me sad.

Handling old ornaments is comforting; to remember a time before Netflix, Donald Trump or smart TVs, when we used to wait for the postman to bring letters, and DVDs from Amazon.

The past is a reminder that nothing lasts forever, which is a good reason for not stressing too much about the present. If everything passes, then why worry about anything?

The past is a reminder that nothing lasts forever; which is a good reason for not stressing too much about the present, especially after a week in hospital. If everything passes, then why worry about anything? We can’t go on forever watching Sky News and complaining about Trump; he too will fade, just like every shooting star in the universe.

And even my deepest anxieties will pass, because there is nothing permanent about being me. The sense of “self” I grapple with as my teeth decay, my hips ache and my arteries clog is only as permanent as a broken bowl in the shed.

Of course as a young man I knew that nothing would last forever, but real wisdom only arrives with age; a quiet equanimity that understands death and decay to be as normal and natural as November leaves falling.

I spent November watching a robin who stares at me so confidently that sometimes I think it’s the same bird I’ve been watching for two and a half decades.

And he’s not the only visitor I find comforting; badgers come at night in every season; they take worms from the lawn and gather moss for dry bedding. Although the only time I got up close with Mr Badger was one winter night in the scullery, when he came in through the door flap to steal cat food. He didn’t have an easy job squeezing himself back out again when I reached for a sweeping brush.

I know he’s out there, because he leaves his tracks in the long grass year after year. He leaves holes in the lawn and bald patches in the moss. And I am still convinced it was him who took the Christmas baubles that glowed along the avenue one winter to welcome strangers.

Maybe he didn’t like the LED lights. Or else he thought that shiny things might look good in his underground sett, glowing beside the sleeping body of his pregnant partner as she waited out her time in the dark.

When we came first, the kitchen was a bare cement floor with a Stanley range singing in the corner and a wooden dresser we got as a wedding gift holding all our plates

I remember one December afternoon when my daughter was young and the snow around the house was dotted with little paw prints and we searched together for any sight of a furry snout. My daughter fled the nest long ago and now rides her horses across faraway beaches, but I still stand at the window sometimes, waiting for snow and hoping to catch a glimpse of old Mr Badger.

I suppose a week in hospital was enough to remind me that human life is not as solid as the life of a tree, and not even half as long.

But it was cold in the shed, so I returned to the kitchen; a space that has also changed over the years. When we came first, it was a bare cement floor with a Stanley range singing in the corner and a wooden dresser we got as a wedding gift holding all our plates.

As evening gathered around me, I sat there remembering all the times the kitchen had been remade with new tiles, worktops and layers of paint. And I stared out at beech trees that have grown higher than the rooftop since we planted them on an autumn day in 1995; which seems like only yesterday. And when the beloved came home she walked past me before realising I was actually there.