Meghan Markle: pushy princess or saviour of the royal family?

Prince Harry tells the BBC that his late mother Diana would have been 'best friends' with his fiancé Meghan Markle, who showed off her dazzling three-stone engagement ring that memorialises Diana. 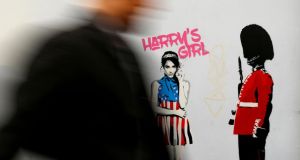 It was only a matter of time before comparisons were made between Meghan Markle, Prince Harry’s fiancee, and Wallis Simpson, who married Edward VIII in 1937. You might just have expected it to take a bit more time.

Fifty-two minutes was all it took after the official engagement announcement for the Spectator magazine to tweet: “Meghan Markle is unsuitable as Prince Harry’s wife for the same reason that Wallis Simpson was unsuitable: she’s divorced and Harry’s grandmother is supreme governor of the CofE.”

As anachronistic as this observation seems in 2017, particularly given that Simpson was suspected of being a Nazi sympathiser, the comparison was perhaps inevitable. Both women are American; both were previously divorced; both apparently swept their princes off their feet; neither is regarded as “royal material” – something that might seem like a compliment to most observers but makes dedicated royal watchers skittish.

In reality Markle is not all that far from “royal material”, certainly not appreciably farther than, say, Kate Middleton. Born in Los Angeles, she grew up in the relatively privileged environment of the Valley, the child of an Emmy-winning lighting designer and a “free-spirited clinical therapist”.

Those who insist she’s not “royal material” are not really talking about her parents’ professions, or her own career as an actor who has played the occasional raunchy scene, or her leftist politics, or whether she knows which hand to hold a fish fork in.

The Prince of Wales is delighted to announce the engagement of Prince Harry to Ms. Meghan Markle. pic.twitter.com/zdaHR4mcY6

Meghan Markle is unsuitable as Prince Harry's wife for the same reason that Wallis Simpson was unsuitable: she’s divorced and Harry’s grandmother is supreme governor of the CofE
https://t.co/CnEasK1T67

Always proud of this beautiful woman. This was when she graduated from USC with a masters in social work. Honoring my mom, Doria, and all the amazing mamas in our lives. Special thanks to my girls @serenawilliams @oliviapalermo @piamiller @mishanonoo @priyankachopra @iamsarahgrafferty for sharing the best advice their moms ever gave them on my site @_thetig ✨ read all the pearls of wisdom here: http://thetig.com/mother-knows-best/ #mothersday #TheTig ❤️❤️❤️

Happy Father's Day, daddy. I'm still your buckaroo, and to this day your hugs are still the very best in the whole wide world. Thanks for my work ethic, my love of Busby Berkeley films & club sandwiches, for teaching me the importance of handwritten thank you notes, and for giving me that signature Markle nose. I love you xo -Bean

Just as the hard-line royalists of the 1930s were choked with snobbery at the prospect of their monarch marrying not just a divorcee but an American divorcee, today’s crop are distressed by Markle’s ethnicity: specifically, the fact that her mother, Doria Ragland, is African-American, a yoga teacher who wears sweatpants and has her hair in dreadlocks.

“Not royal material” in Simpson’s day meant “not British enough”. In that respect little has changed. Even those who don’t refer directly to Markle’s ethnicity find other reasons to hint at their suspicion – the Daily Mail ran a snide piece with quotes from a “friend” referring to her as “Princess Pushy” and “Diana 2.0”, and to her parents as “once bankrupt”.

In the other corner are those who are preoccupied by Markle’s ethnicity for entirely different reasons. The Guardian writer Afua Hirsch referred to the positive message it sent that “a senior royal can love, and marry, someone whose ethnic heritage is not just different to his own, but the heritage that has always been most othered in Britain – black and African”.

So does this engagement mark a new chapter in the fortunes of the British royal family, a breach with the United Kingdom’s colonial past by the very people who rank as its ultimate beneficiaries towards a more inclusive, more meaningful future?

Frankly, great change, even in the lifetime of the generation of younger royals, seems unlikely. For a start Markle’s fiance, Prince Harry, might have grown up to be a likable, charismatic young man, who talks openly about mental health and the challenges of royal life. But, for all that, he has known nothing but eye-watering privilege in a family that is the antithesis of diverse.

He is still the guy who dressed up, at 20, as a Nazi for a fancy-dress party, and joked that his Zimbabwean ex-girlfriend, Chelsy Davy, wasn’t “black or anything”.

More significantly, the royal family doesn’t have a history of allowing outsiders to mould it. Women who might have held some promise in that regard – Simpson, perhaps; Princess Diana and Sarah Ferguson, certainly – found themselves crushed by the machine. Princess Margaret, Queen Elizabeth’s late sister, managed a reasonably successful and prolonged rebellion, but she wasn’t an outsider; nobody could ever have accused her of not being “royal material”.

On the young couple’s side are Harry’s experience, their shared interest in human rights, their knowledge of how to play the press game, and their apparent adoration of one another. Together, all of that might just be enough to save Markle from being chewed up and spat out by the royal machine.

Whether it will be enough to save the royal family, too, and set the monarchy on a path to a brighter, better future, seems much less likely.