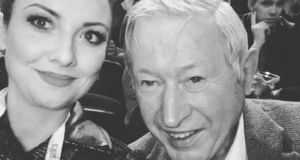 An 80-year-old former accountant who has had 34 letters to The Irish Times published since the 1970s on topics such as cuckoos, rugby, the economy, volcanoes and Fianna Fáil has come to nationwide attention for his letter about rock band Kasabian.

In September, 80-year-old Galway-man Tom Grealy wrote a letter to The Irish Times, detailing a text which he had just received. It was handwritten as are all his letters to this newspaper:

It read: “”I have often wondered how I have managed for most of my 80 years without receiving a text message. I have just received one from Three telling me that Kasabian will be at the 3Arena in Dublin in November. I can’t wait”.

Next, Keith Walsh of RTÉ 2fm’s Breakfast Republic spotted his letter and brought him on air to discuss it.

He was then asked would he like to go to the concert with Breakfast Republic host Jennifer Zamparelli. Mr Grealy agreed enthusiastically and last Tuesday night they attended the concert in 3Arena, accompanied by his two daughters.

Find out how they got on on #REPUBLIC2FM tomorrow from 6am! pic.twitter.com/EPIzqK5w6e

A listener of the programme whose brother is a production manager with the band contacted Breakfast Republic, organising for Mr Grealy to go backstage and attend the after-party.

“It was spectacular,” Mr Grealy told The Irish Times . “I’ve been in the Royal Albert Hall and other places, and they might have the edge on it, but in terms of catering and all-round facilities I don’t think there’s anything to beat it, including Madison Square Garden.”

Commenting on the atmosphere and participation from the audience he marvelled at the “thousands of young people were jumping up and down in excitement, it was just amazing.”

When asked about what going backstage was like, Mr Grealy replied: “I was treated like bloody royalty, it was ridiculous. It’s a great country in which to be a geriatric.”

Since the 1970s, the former accountant said he has written 34 letters to this newspaper on a wide range of topics, including the economic crisis, the first cuckoos of winter, volcanic impact, rugby tickets and Fianna Fáil.

“My aunt said anybody who writes letters to the paper is either a crank or has nothing to do, and since I’m busy enough I must be a crank,” he said.

This year, his son presented him with a framed collection of all of his letters over the years.

He would attend another concert in the 3Arena. “I love going there, it’s done so much for Dublin, to go down the Quays, it’s spectacular compared to what it was 40 years ago.”

Mr Grealy has always had a keen interest in music, saying that “sport and music are the two that keep me going”. He sings in many choirs, and his son is an organist who has performed at Westminster Cathedral.