Christmas cake? For our family it was ‘All In The Cooking’

Family Fortunes: Reflections on a treasured family ritual at Yuletide – including the tale of the incredible shrinking cake 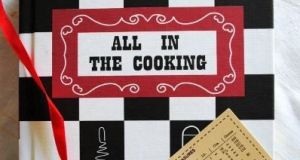 When All In The Cooking was first published in 1947 by The Educational Company of Ireland, it became an instant best seller. Students of domestic science in secondary schools and housewives alike studied its contents carefully and learned new skills. In those days before Nevin, Catherine F, Rachel or Donal became household names, it soon became the cookery bible.

A tradition was born in our house as soon as we bought our copy. The tradition of making the Christmas cake started in the early 1950s. For many years we feasted heartly on Christmas Day on a delicious rich moist fruit cake topped with delicious almond icing and a wonderful covering of glistening white royal icing. What memories the mention of it evokes.

The ritual started in late October when the trusted book was opened and the used brown worn pages consulted. Currents, raisins and sultanas were bought loose from the grocery shop. The currents had to be washed in warm water and then dried completely. Together with the raisins and sultanas they were rubbed in a floured cloth and shaken on a wire sieve to remove the stalks. Sugar was removed from the candied peel which was then sliced thinly and chopped. All the ingredients were assembled to make this wonderful cake.

The mixture was carefully poured into the prepared tins. The inside was lined with two layers of greaseproof paper. Then it was lovingly wrapped in two layers of brown paper to protect it during the long bake. The trustworthy Wellstood cooker opened its oven door. After four hours of waiting, it was time to inspect the finished product and pour the remainder of the whiskey over the hot cake. What an aroma. We children wished Christmas Day was the next day.

In 1957, when the cake was safely wrapped and stored, my mother had to go away for a night. Knowing my father’s sweet tooth, she searched for a safe hiding place for her precious tin. Comforted in the knowledge that nobody could find it, she left. Time passed and it was time for the almond paste to be applied to the cake. To my mother’s horror, the cake had shrunk! My father had found her hiding place,turned the cake upside down and had helped himself to a whole slice of the bottom, wrapped it up again and hoped she wouldn’t notice.