Eoin Colfer: ‘I checked my parachute and realised that I was indeed going to die’ 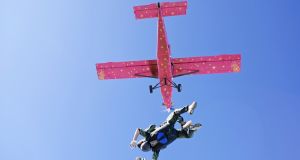 When the world stopped spinning, I checked my chute and realised that I was indeed going to die. Photograph: Getty Images

The Time of My Life is a weekly column about a moment that changed someone’s life – for the better or the worse. Share yours by emailing magazine@irishtimes.com with Time Of My Life in the subject line

My wife once gifted me a voucher for a parachute jump. So I immediately called my mate Dec, who is possessed of a little more backbone than myself, and he volunteered to join me at 7,000ft. Some weeks later we headed north to Offaly. but I never really believed we were going to go through with anything. And sure enough, when we had completed our training, the instructor deemed the skies too cloudy and we were packed off home.

Unfortunately, the Parachute Club managed to find slots for us the following weekend, so off we drove once more with Dec playing Learning to Fly on repeat, which I pretended to find hilarious.

Coming down is the hardest thing.

That afternoon, Dec and I found ourselves in a light aircraft which seemed only slightly less flimsy than a 1970s’ Citroen Dyane. When we were high enough, the instructor told us to climb out onto the wing, place our fingers on the painted handprints and release both hands simultaneously on his command.

Remember, said the instructor. I give you the thumbs-up and you release both hands

My friend Dec was out on the wing in a jiffy. Although he was and continues to be a GAA man who as a species have no understanding of any injury that cannot be fixed by a rub of magic coach water and a slap on the backside. I watched in horror as Dec dangled from the wing, and let go both hands upon receiving the thumbs-up. Gravity sucked him down like a giant Dyson.

Remember, said the instructor. I give you the thumbs-up and you release both hands.

To which I maturely said: “Your suit is stupid and so is your head.”

Stress is my only excuse.

I grasped the wing, and glancing down I could see Dec’s parachute swaying peacefully below me.

Perhaps, I thought. We could survive this.

Buoyed by this moment of optimism, I responded to the instructor’s thumbs-up with a thumbs-up of my own, which meant I was whipped pin-wheeling away from the plane which more or less ensured that when the lines were tugged out of my chute, they came out tangled. When the world stopped spinning, I checked my chute and realised that I was indeed going to die.

Then God spoke to me.

Kick out of it, said God. Don’t just hang there like an idiot.

God is very judgey, I thought.

But of course it was not God. It was the instructor in my ear piece.

Kick out of it?

Of course, we had learned this in training. Just imagine the chute is like the park swing of your youth and kick out of the tangle. I gave it a go and soon my lines were untangled and my chute billowed and filled with air. My descent slowed rapidly and for a minute or two I was able to enjoy the smug satisfaction of the outdoorsy type.

Then, of course, I botched the landing and was dragged along the field like a dog trying to de-itch his arse, while Dec landed square in the landing zone.Still, we were both alive and in the mood for a celebratory beer.

One hour and two drinks later my heart had slowed down to a reasonable rate so when Dec said: “Jaysus that was right laugh. We should join the club.” I thought of the strangled parachute and said: “No, Declan. Never ever again.” I have stuck to that, and it is amazing how easy it is not to jump out of a light aircraft when your mind is made up.