A surprising thing happened. I found myself agreeing with a priest

Laura Kennedy: Fr O’Donnell suggests Catholics substitute ‘nativity’ for ‘Christmas’, to reflect how we now think of the season 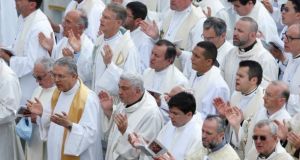 The word ‘Christmas’ no longer conveys the significance of the God who joined the human caravan and walked in our shoes, says Fr Desmond O’Donnell

Reading The Irish Times recently, I was surprised to find myself in reluctant agreement with a priest on the subject of Christmas. Fr Desmond O’Donnell, based in Inchicore, Dublin, said that “The word ‘Christmas’ no longer conveys the significance of the God who joined the human caravan and walked in our shoes . . . Christmas has a different connotation now.”

While he doesn’t have any issue with people celebrating the season, O’Donnell suggests that Catholics should substitute the word “nativity” for Christmas, as the meaning of that word has changed over time and altered how believers as well as non-believers consider the season.

This raises interesting questions for non-believers like me. As an atheist, or at least someone who does not see sufficient evidence to posit the existence of a God, let alone to understand how that God might function, or what it might be, I still find myself joyously knee deep in stuffing every December 25th. Christmas as a Christian holiday is a pastiche of pagan festivals which came before it, but we cannot wriggle out of the issue quite so easily as to dismiss it on that basis.

Celebrating Christmas as an atheist, or a non-Christian, presents a performative contradiction that should lead us to question ourselves

Christmas as we know and celebrate it now has its roots firmly in Christianity. Though it has become in practice a day of feasting and spending time with family (sometimes reluctantly), it is primarily a religious festival, and celebrating it as an atheist, or a non-Christian, presents a performative contradiction, which should lead to us questioning ourselves.

When I present this thought to friends who love the trappings of Christmas as much as I do (there is no other acceptable occasion to eat seven roast potatoes in one day), they balk. Only those friends I know who actively participate in a non-Christian religion, or come from a culture where Christmas is simply anathema, don’t bother with it at all.

Friends who are culturally Jewish, or culturally Muslim or simply lapsed Catholics are as keen to have the big dinner and give the gifts as I am, and yet, there is an argument to be made that we are all taking part in the most fun parts of a religion we don’t have any real investment in, while leaving the uglier and more labour-intensive stuff to the believers.

In order to get around this, we need to admit that in Europe and much of the West, we share, for the most part, a Christian culture. This doesn’t entail believing in any of the dogmas of Catholicism, or the prescriptive moral and behavioural mandates of biblical literalism, or knowing very much at all about Christian religion. It simply means that our general ideas around morality, politics, and the best approach to living together are heavily informed by Christian thinkers like Augustine of Hippo and Thomas Aquinas.

Yes, there are plenty of other influences in there too, but a quick read of just those two thinkers is enough to couch our moral and functional norms comfortably in their Christian cradle, leaving atheists like me to accept the reality that Christian ideas, or ideas with a traceably Christian origin, constructed the part of the world in which we live and must be swallowed with each mouthful of delicious cider-baked ham.

This is not a problem. Indeed, we have lived until recently in such a homogeneous culture that we took its Christian influences for granted as we went about our secular lives. As an atheist, I have no issue accepting that most Irish people, myself included, are culturally Christian. This is not in contention with what I hold to be the bad ideas and malign influence in Ireland of the Catholic Church as an institution.

Whatever about Catholics themselves, we should probably stop calling Christmas by that name (though that seems a highly impractical suggestion which is unlikely to stick). We should probably accept as people who don’t believe in the genesis of that day as Catholics or other Christians do, that our Christmas is something else.

It is no less positive or well-intended than the “real” thing, as it were, but it can be argued that we are performing a ritual that we don’t really believe in, though it is part of our shared culture. As to what to call it, who knows? “Secular Giving Feast Day” falls rather flat.