Are We There Yet? Memories of Toy Shows past and things to do with children this weekend 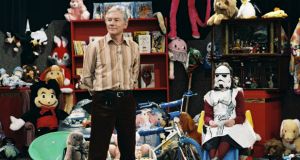 Uncle Gaybo did the best Late Late toy shows, but that might just be the middle-aged, nostalgia-riddled, 1980s child in me talking. Looking back at old toy shows on YouTube, you can see Gay Byrne wasn’t quite as enthusiastic as Tubs, and he didn’t have anything like the budget either, but his slight impatience with the whole thing – and those sensible slacks and woolly tank tops – were a massive part of his charm.

This week in our high-octane house the snacks are being stockpiled in readiness for this year’s event. The brand new pyjamas are warming on the radiator; The envy-ometer is set to 11. (“Why can’t we be on the Toy Show?” will be said at least 17 million times over the course of the evening.) There’s a nice Sancerre chilling in the fridge and bedtime is cancelled indefinitely. We are as Late Late Toy Show 2017-ready as we can be.

Preparing for this one with my daughters has me remembering the one that I missed. Travel with me back to vintage recession-era Ireland, to December 8th, 1984. Garret FitzGerald was taoiseach; it rained all the time.

That night I rain-checked Gaybo and went to see Wham! in the RDS for what was my first proper concert. I was 12 and heart-sickeningly in love with George Michael.

I walked to the RDS on my own clutching a 14-page love note to George which I had tied with a pink ribbon. My plan was that I’d throw the letter up to the stage, that George would get it and would ring me up. I put my phone number on the letter, my address and, if I’d had a PPS number at that point, I’d have put that in too. I seriously imagined I might have had a chance with George. (We all did back then, in fairness.)

As it turned out, one of the best moments of my childhood was watching Last Christmas sung live by George Michael (and Andrew Ridgeley – he must have been there too but he doesn’t loom large in my rememberings). I do remember fake snow. And sleighbells. And George in all his magnificence. It was magical.

Of course I lost the 14-page note somewhere in the middle of Freedom. I tried to find it as the venue emptied, searching on the floor under Christmas confetti, mortified that someone other than George would read my devoted words.

Eventually, I floated home and strolled into my sitting-room where my family were sat glued to the end of the Toy Show. I didn’t hear a word Gay said, which was unusual, seeing as I was – still am – his biggest fan. In a way that was my last childhood Toy Show. It felt like it was time to grow up.

Last Christmas Day my daughters wiped my tears when the news broke that the man who sang and wrote Last Christmas – aka The Best Christmas Song Ever Written (this is just a fact) – had died.

This year, to save me from tears, we’ll watch the Late Late Toy Show together. And this weekend we might also go to . . .

At a time of year when it feels like we can’t move for spending money, it was heartening to be sent an email about an event that is indisputably free. At the St Agnes Christmas market, “admission is free, taking family photos and chatting to Santa Claus is free, a magic show for kids with Murf the Magician is free”. There are some games and activities but they cost mere cents, and there’s live music, singalongs and plenty of Christmas crafts at reasonable prices. All proceeds go to the St Agnes School Violin and Orchestra Project.

Oh, this sounds flipping wonderful. A contemporary retelling of Hans Christian Andersen’s extraordinary fairytale. It’s part theatre, part dance and it’s a piece that – I’m reliably informed – will dazzle your senses and break your heart. Read on: “An orphan girl, adopted by a wealthy Dublin family, is given a pair of beautiful red shoes. At first it appears her dreams have come true . . . but appearances can be very deceptive.” It stars Rosaleen Linehan, Owen Roe, Marion O’Dwyer and Stephanie Dufresne, playing the leading role of Karen. There are some scary parts but it’s recommended for ages eight and older. Under-12s need to be accompanied by a parent/guardian.

Where: The Gate Theatre, Dublin

Another craft fair, you say? Yes. I find them very restful at this time of year for Christmas shopping, especially with the children. There is much less of the craziness that overtakes Grafton Street around now, to which I am increasingly allergic. These stallholders were carefully selected to provide a range of the best locally produced pottery and ceramics, textiles, batiks, fashion, jewellery, art prints and more. If the kids are complaining about “not another craft fair!” just tell them there’s hot chocolate.

Another sparkling Christmas show aimed at all ages, performed by WhistleBlast Quartet and arranged by the acclaimed Ken Edge. It will include Gabriel’s Oboe, Goldfinger and Leroy Anderson’s Sleigh Ride. An eclectic Christmas concoction awaits.

When: Saturday December 2nd at 1.30pm

Email with tips about upcoming family-friendly events and things to do with your children, grandchildren, nieces or nephews, or ones you’ve borrowed, to arewethereyet@irishtimes.com or find me on twitter @roisiningle.