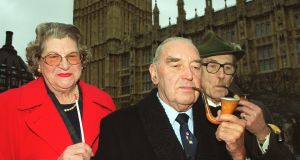 Members of the Lords & Commons Pipe and Cigar Smokers club Lady Trumpington, Lord Mason of Barnsley and Lord Harris of High Cross, outside the Houses of Parliament, as defiant pipe and cigar smokers from both houses of Parliament lit up to mark national no-smoking day in 2000. Photograph: William Conran/PA Wire 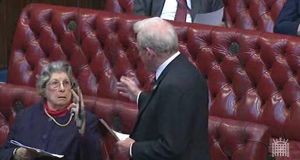 Lady Trumpington making a two-fingered gesture to a fellow peer, Lord King, after he referred to her age during a televised debate in the House of Lords. Photograph: PA Wire 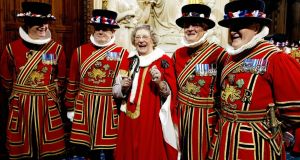 Lady Trumpington, who died on Monday aged 96, in the House of Lords in 2005. Photograph: Andrew Parsons/PA Wire

Lady Trumpington, who worked on the top-secret Bletchley Park code-breaking operation during World War II and later embarked on a political career that made her a celebrity in Britain in her 90s, died on Monday. She was 96.

She found fame of her own, an irreverent, outspoken 6ft-tall figure whose grey curled hair might have easily been styled by Queen Elizabeth II’s hairdresser.

Bletchley Park’s achievements, kept secret for decades after the war, were made widely known by the films Enigma (2001) and The Imitation Game (2014), and, in 2017, by the posthumous pardon of Turing, who had been prosecuted after the war for homosexuality.

Lady Trumpington was appointed to the House of Lords, the upper chamber of the British Parliament, in 1980. She held a series of government positions from 1985 to 1997, leaving her last ministerial post at age 75.

Her time in the limelight began in 2011, when, at 89, she made a two-fingered gesture of contempt to a fellow peer, Lord King, a former Conservative defence secretary, after he had referred to her age during a televised debate in the House of Lords. (The particular V-sign she used is regarded as an insult in Britain.) “His family say he is famous now,” she said about the episode.

She found fame of her own, an irreverent, outspoken 6ft-tall figure whose grey curled hair might have easily been styled by Queen Elizabeth II’s hairdresser. She was invited to appear on television talk shows and starred in a documentary film about fashion for older women.

As a guest in 1991 on the BBC radio programme Desert Island Discs, which invites public figures to choose and discuss the music they would take with them if they were castaways, she said that in addition to I’ll Follow My Secret Heart, by Nöel Coward, she would also want to take along the crown jewels, “because somebody would come to look for me”.

This month, she was among a group of Bletchley Park veterans awarded the Légion d’Honneur, France’s highest honour, for their contributions to the liberation of France.

“Oh, I had such fun in Paris after the war,” she said after receiving the medal in a ceremony at her home. “While this award recognised my time at Bletchley, I still find it difficult to discuss my time there, as we were taught to never talk about it.”

She attended most sessions of the House of Lords until she retired in 2017, the day after she turned 95. She championed brevity in debates.

She was born October 23rd, 1922, to Maj. Arthur Campbell-Harris and Doris (Robson) Campbell-Harris, an American heiress of a paint business in Chicago, where most of her family lived.

Her father had been a Bengal Lancer and served as an aide to the viceroy of India before resigning his commission to work for his wife’s family business. The family fortune was lost in the financial crash of 1929.

After completing school in France, Jean was sent to work on the farm of former prime minister David Lloyd George, a family connection. In a ghostwritten memoir, Coming Up Trumps, she wrote that it was her father who got her an interview to work at the Bletchley Park facility, on an estate about 80km northwest of London, when she turned 18 in 1940.

Able to speak both French and German, she was quickly hired and joined a team assigned to transcribe intercepted German U-boat messages.

Women, who made up 75 per cent of Bletchley Park’s staff by the end of the war, were recruited to do jobs at all levels, from clerical tasks to helping break German codes.

People at Bletchley worked in small, isolated groups and were discouraged from socialising. Lady Trumpington remembered mixing only with those who were transported together between Bletchley and their lodgings. But, she said, this did not keep her from taking frequent trips to London on days off and dancing the night away.

After the war, eager to see the United States, she moved to New York in 1952 and shared an apartment above the Stork Club, at the time the most famous night spot in the country. In a 2014 interview to mark the release of her memoir, she recalled having so little money in those days that she would rummage through the bins at the back of the club for “handbags and all sorts of lovely things”.

Still, she got caught up in New York’s cafe society and became a sought-after guest whose party trick was tap-dancing on tables.

Lady Trumpington said she would not have moved back to Britain if she hadn’t met her future husband, Alan Barker, a master at Eton, the boys’ boarding school, during her New York sojourn. He was on a fellowship at Yale at the time. He later led schools in Cambridge and London.

“Heaven knows!” she said. “Me, the flop at school. Who’d have thought I’d end up marrying a headmaster?”

During her husband’s tenure at the Leys School in Cambridge, Lady Trumpington kept up her society habits. “I smoked and drank and did everything naughty,” she said.

Once, when presenting awards to Leys athletes, she jumped fully clothed into the school’s swimming pool, followed by the students. “My husband was furious,” she said.

Lady Trumpington was elected the Cambridge City Council as a Conservative in 1963 and held her seat for a decade. She was also mayor, for a one-year term. Her appointment to the House of Lords in 1980 followed two unsuccessful campaigns for a seat in the House of Commons. (She apparently took the name Trumpington from a village outside Cambridge.)

She attended most sessions of the House of Lords until she retired in 2017, the day after she turned 95. She championed brevity in debates. “Their lordships do go on and on, and it is quite unnecessary,” she once said.

A match made in kitchen garden heaven in Kilkenny
9