Writer of ‘Butch Cassidy’ and ‘All the President’s Men’ famously said: ‘Nobody knows anything’ 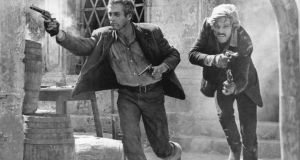 William Goldman, who won AcademyAwards for his screenplays for Butch Cassidy and the Sundance Kid and All the President’s Men and who, despite being one of Hollywood’s most successful screenwriters, was an outspoken critic of the movie industry, died on Friday in Manhattan. He was 87.

The cause was colon cancer and pneumonia, said Susan Burden, his partner.

In his long career, which began in the 1960s and lasted into the 21st century, Goldman also wrote the screenplays for popular films such as Misery, A Bridge Too Far, The Stepford Wives and Chaplin. He was a prolific novelist as well, and several of his screenplays were adapted from his own novels, notably The Princess Bride and Marathon Man.

In a business where writers generally operate in relative obscurity, Goldman became a celebrity in his own right. Eight of his films each grossed more than $100 million in the US.

Goldman achieved renown in Hollywood in the late 1960s when he sold his first original screenplay, for Butch Cassidy, to 20th Century Fox for $400,000 (the equivalent of more than $2.75 million in 2018 dollars), a record for a screenplay at the time.

Goldman had written the screenplay – the tale of two outlaws from history who try to evade the law in the Old West – in 1965 while teaching creative writing at Princeton University.

Despite his Hollywood success, Goldman viewed the film business with a jaundiced eye. As he often pointed out, he considered himself not a screenwriter but a novelist who wrote screenplays. He wrote more than 20 novels, some using pen names, in addition to more than 20 screenplays.

In Adventures in the Screen Trade, Goldman made headlines in this famously thin-skinned industry when he declared, “Nobody knows anything,” a succinct assessment of the movie business that was embraced by Hollywood insiders and film critics alike.

William Goldman was born on August 12th, 1931, in Highland Park, Illinois, to Maurice and Marion ( Weil) Goldman. His father was a businessman whose successful career was scuttled by alcoholism. As a child, William watched countless films at the venerable Alcyon Theater in Highland Park; he later said that that was probably where he got many of his best ideas.

At Oberlin College in Ohio, where he enrolled with the intent of becoming a writer, he encountered the first disappointments of his nascent career. “I was so programmed to fail,” he told The Guardian. “I had shown no signs of talent as a young man.”

He managed to get the worst grade in his creative writing class, and, despite being fiction editor of the school’s literary magazine, he was unable to get a single story published in it. “Everything was submitted anonymously and every issue I would sneak in a story and the three of us” – Goldman and two other editors – “would meet and I would listen while they both agreed whoever wrote this thing (my thing) was not about to get published,” Goldman wrote in Adventures in the Screen Trade.

Undaunted, after graduating with a degree in English from Oberlin, he went to graduate school at Columbia. On receiving a master’s degree in 1956, he immediately began working on his first novel.

“I was so panicked that I would end up my life as a copywriter in an ad agency in Chicago that I wrote The Temple of Gold in less than three weeks,” he said in an online chat in 2001. “I had no idea what I was doing.” It was published in 1957.

After publishing five novels, Goldman was disconsolate about his mixed reviews and modest success. But his fortunes began to turn when the actor Cliff Robertson, who had read Goldman’s 1964 novel No Way to Treat a Lady, approached him about writing a screenplay adaptation of Flowers for Algernon, Daniel Keyes’s best-selling science fiction novel about a mentally challenged man who is turned into a genius.

Goldman agreed and then, realising that he had no idea how to write a screenplay, panicked. Unable to sleep, he recalled, he rushed from his New York City apartment at midnight, headed to an all-night bookstore in Times Square and found a single volume on screenwriting.

Though he was eventually fired by Robertson (“probably because it was a terrible screenplay,” Goldman later said), he kept at it.

Goldman attributed the record sale of his Butch Cassidy script to “a brilliant piece of agenting” by Evarts Ziegler, who engineered a bidding war for the script, even though Goldman was virtually unknown in Hollywood. The film, starring Paul Newman and Robert Redford, went on to become the highest-grossing of 1969 and won four Academy Awards, including for best original screenplay.

Of his many novels, Goldman was particularly fond of The Princess Bride, which was published in 1973. But it took almost 15 years of missteps and false starts for his own adaptation of it to make it to the screen.

In 2012, at a 25th-anniversary reunion of the Princess Bride cast, Goldman was asked if he planned a sequel. “I’m desperate to make it and write it and I don’t know how,” he said. “I would love to make it more than anything else I’ve not written.”

Conversely, Goldman was deeply disappointed with his experience writing All the President’s Men, based on the book by the Washington Post reporters Bob Woodward (played by Redford) and Carl Bernstein (Dustin Hoffman) about their role in exposing the Watergate scandal. It was a problematic project in which Goldman butted heads with Redford, who was the producer as well as the co-star.

Goldman’s screenplay won him his second Academy Award, for best adapted screenplay. But he later wrote: “If you were to ask me ‘What would you change if you had your movie life to live over?’ I’d tell you that I’d have written exactly the screenplays I’ve written. Only I wouldn’t have come near All the President’s Men.”

Along with Burden, he is survived by his daughter, Jenny Goldman, and a grandson. Another daughter, Susanna Goldman, died in 2015. His marriage to Ilene Jones ended in divorce in 1991, after 30 years.

Goldman expressed his philosophy of writing simply in Adventures in the Screen Trade: “As a writer I believe that all the basic human truths are known. And what we try to do as best we can is come at those truths from our own unique angle, to reilluminate those truths in a hopefully different way.”