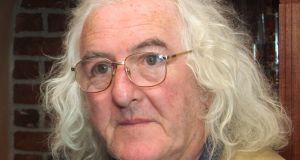 Traditional music lost one of its finest exponents with the recent passing of Alec Finn. Born in Rotherham, south Yorkshire, his parents, steelworker James Phinn and Patricia Mullarkey, were of Irish Catholic stock. Alec (christened Alexander) was the third of four children, and his strong artistic talents led him to art college in Rotherham. A lover of game birds, he kept owls and falcon from a young age.

He first became aware of Irish music through his grandmother’s céilí records. Having had strong roots in the blues, in the early 1970s, he chose to come to Ireland, when most of the musical traffic was going the other way. He travelled on the ferry, peregrine falcon in tow, and for a time, shared his flat in Dublin with Phil Lynott, while working as a commercial artist. Once here, he changed his surname’s spelling to Finn, thus returning it to its original form, he insisted.

Finn moved to Spiddal and took up the Greek bouzouki after a friend brought one back from his travels, and finding himself in Hughes’ pub in Spiddal, he quickly struck up a rapport with local musicians who were spellbound by the sound of this exotic instrument, and by Finn’s filigree playing style. In 1974 De Danann was formed by Finn, fiddler Frankie Gavin, banjo player, Charlie Piggott and bodhrán player, Johnny ‘Ringo’ McDonagh.

The band’s distinctive sound was hugely popular, and De Danann became the fulcrum of many fine singers’ careers including Mary Black, Dolores Keane, Maura O’Connell, Tommy Fleming and Eleanor Shanley. Finn’s exceptional musical connection with Frankie Gavin together with his ground-breaking design concepts for the band’s album covers, and his suggestion that they cover The Beatles’ Hey Jude, along with Handel’s Arrival of the Queen of Sheeba propelled them on their path to international success, with extensive international touring from Asia to South America and across the US.

In 1979 Finn’s bouzouki playing was notable on the eponymous seminal album by Noel Hill and Tony Linnane, and his accompaniment of whistle player, Mary Bergin on her 1994 album, Feadóga Stáin was a joy to hear, the delicacy of his playing at one with Bergin’s weightless melodies.

A colossus, both physically and musically, Finn combined an incredible wit with an unflinching honesty. He was outspoken in his views and didn’t hold back. He was an artist to his core, and lived very much in the moment. He understood the heart of the music he played, and possessed an innate understanding of the diverse musicians whom he accompanied.

Finn’s natural and distinctive weaving bouzouki style has been the template for many musicians who came after him. Anyone who played with him spoke of how freely and effortlessly his music flowed. He understood how to colour the melody, while also possessing an exceptional sense of rhythm that made sense out of the music.

Although De Danann endured an acrimonious split some years ago, Alec Finn and Frankie Gavin celebrated their recent reunion with the release of a new album, Traditional Irish Music On Fiddle and Bouzouki Volume 11. He had also recently recorded an album with his son, Cian.

Finn died unexpectedly, following a stroke, surrounded by his family. An episode of Sé Mo Laoch, devoted to Finn was broadcast on TG4 just weeks before he died and illustrated the full breadth and depth of who he was, both as a musician and an artist.

Alec Finn (born Alexander Phinn) was born on June 4th, 1944 and died on November 16th, 2018. He is survived by his wife, Leonie King, their children, Heather and Cian, and granddaughter, Ruby Rose, as well as his brothers, Michael and Gervase and sister, Christina.