‘When I’m gone, I’m gone. And yet I find myself talking to the dead’ 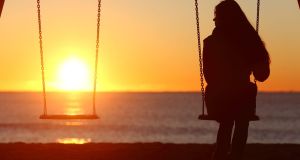 ‘My mother’s ashes are in a pot of roses in my backyard. She’s currently sprouting some resilient little yellow buds’

I’ve been thinking about the dead recently, and dreaming about them too. In the dreams, I’m usually younger and terribly industrious, chasing faceless toddlers across eight-lane highways or attempting to cater for hundreds of people in tuxedos with a watermelon and a packet of noodles. The dead, whom I know are present and patiently waiting for me, remain just beyond my reach, having convivial conversations in deckchairs.

We all have these kinds of dreams, don’t we (don’t we?), complicated narratives spiced with anxiety and loss, dreams that hang around the psyche until the morning caffeine finally kicks in.

As it happens, my mother’s ashes are in a pot of roses in my backyard

Anyway, I don’t need Mystic Madge to interpret my night-time journeying. It is clear to me that no matter how busy we convince ourselves we are, no matter how densely we pack the hours, grief can’t be ignored. In my experience, it is a feisty little animal that does not like to be left outside the back door while the house party is in full swing. Imperious, unrestrained and astonishingly demanding, grief, like a high-maintenance lover, is liable to cause a scene just when you’re trying to keep the head down and get on with the complicated enough business of living.

When my mother died, 15 months ago, I went to college and did a one-year master's course, and since then I’ve been lying around under the cranky engine of a book I’m trying to write, fiddling around with the pistons. I got the results of my master's just the other day and turned around to tell her how I’d done, and realised that she wasn’t there.

As it happens, my mother’s ashes are in a pot of roses in my backyard. She’s currently sprouting some resilient little yellow buds, hardy and optimistic shoots that seem to defy winter, so I went outside and told the roses about my master's instead.

I’m not a religious person. I tolerate ghost stories, I walk under ladders, I don’t see angels or auras, and I don’t expect to be sitting around shooting the breeze with the ancestors, a paper plate of potato salad on my knee, on judgment day. And, as the man on the radio advert says, I figure that when I’m gone, I’m definitely gone. And yet recently I find myself talking to the dead. Not all the time; occasionally, though, I ask the dead for things. Not for a new winter coat, or a hybrid car, or a new boiler; no, I ask the dead for other things. I ask the dead to help the living.

Anyway, I mention all this because I realise that I’ve been finding it easier to talk to the dead rather than about the dead, and I wanted to address that.

I met an old friend recently, a warm and straightforward person whose feelings about bereavement chimed with my own. She is my age, a parent and a worker, and, as with my own experience of losing a second parent, her father’s passing was not unexpected. There was simply his inexorable deterioration, followed by an ordinary, quotidian death.

“I feel,” she told me, looking into her coffee cup, “as if I shouldn’t talk about my father any more. I feel as if I’m trying people’s patience. He died more than a year ago and yet I still think about him every day. I almost feel his loss more now. I’ve done everything I was supposed to do: I organised his funeral, I sorted out his possessions, I was decisive and reliable and strong. I did what was expected of me, and now I want him to come back and tell me that I did it well, that I passed the test. Now I want him to come home.”

On the day that we were preparing to bury my mother’s ashes in two plant pots (my sister Laura has the other one), a robin hopped right into my kitchen while my siblings and I were tootling around making lunch and looking for a trowel. The robin perched on the back of a very old nursing chair that used to belong to my grandmother. Utterly calm, it looked around the kitchen, its head cocked to one side as if listening to a song we couldn’t quite hear, before hopping out again.

It’s true, I know, that robins are curious birds, and also that there was plenty going on that day to attract its attention. I’m sure I’ve imbued the robin and the rose with far too much significance, but they are part of my story, and our stories matter I think, regardless of how often they are told.