The best and coolest family activity we’ve ever experienced

Are We There Yet? Climate Change experience Cool Planet is the perfect chance to educate-by-stealth 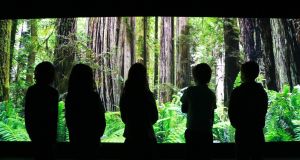 Children taking part in the Cool Planet Experience on the grounds of Powerscourt House and Gardens, Co Wicklow

I could boast all day about how my daughters are the kind of people who adore going to museums and clamour to attend scientific, culturally rich, mind-expanding exhibitions. I could but then I’d be lying through my clenched and – being honest – slightly disappointed teeth.

I can’t even argue with my daughters' rationale. They spend all week being educated in the conventional sense at school so the last thing they want to do at the weekend is “learn even MORE stuff.”

Exposing them last year to Malala’s campaign for the global education of girls improved their attitude to school-going in general, but persuading them of the value of learning outside of school hours remains a painful battle.

Oh, I have it good, parentally speaking, in other ways. I’ve never had to sneak vegetables into their dinners, for one thing. They may be allergic to self-improvement but they are the least fussy, most adventurous kids I know when it comes to their food. One of them mysteriously likes grilled pink grapefruit for breakfast and the other one has a fondness for German cheeses with unpronounceable names.

But I find myself having to sneak education into our weekend activities the way some parents have to slyly incorporate invisible-to-the-naked-eye pieces of carrot into a picky-eater’s bolognese sauce.

So that’s why I didn’t tell them in advance we were going to Cool Planet on the grounds of Powerscourt House in Co Wicklow. The “cool” part was you know, cool, but I knew the word “planet” would set their anti-educational antennae twitching. To avoid being berated for the entire car journey, I refused to say where we were going, only telling them it was a “surprise”.

If I had a euro for every time they said “Mum, if it’s an educational surprise we’re NOT going to do it” I could have paid somebody else to listen to them bang on (and on).

So I am only thrilled and delighted to report that this Cool Planet thing is the best education-by-stealth experience we’ve ever had. I’d go as far as to say it was the best family outing we’ve ever been on. (And for context, we once went to a party thrown by Keogh’s crisps where there were wheelbarrows full of crisps as far as the eye could see.)

To explain: Cool Planet is the world’s first permanent visitor centre dedicated to climate change. I know that SOUNDS like it could be tedious and worthy and boring but – and this is the incredible part – it turns out to be fun and engaging and inspiring. Donald Trump would hate it, which is a bonus.

I don’t want to say too much because I’d like everyone to experience Cool Planet for themselves, but from the moment we received our wristbands – which allowed us to calculate our carbon footprint – we were all entranced. The technology used to create the exhibit is stunning, the visuals and interactivity so clever, thoughtful, engaging and – this was a surprise – entertaining.

We entered as a family that had our heads a bit in the sand, climate-change wise, and walked out as “agents for change” full of chat about what we could all do to make a difference. We had “saved” hundreds of trees during the one-hour Cool Planet experience and afterwards on a long walk through the gorgeous Powerscourt gardens, looking up at the elegant tree specimens towering above us, the dots were well and truly joined. (We’ll gloss, quickly, over the fact that arriving home after our grand day out, we realised we’d left all the lights on.)

So, tell your friends. Tell your children’s schools. Make one of your outings over the Christmas holidays a Cool Planet outing. It somehow manages to motivate you to make changes that can benefit all of us without being one bit preachy or overtly (whisper it) educational.

Apparently, this innovative, important Irish creation which has been open since March is already in demand in other parts of the world.

I’m not a bit surprised. It really is very cool.

Some other things to do with children this weekend ...

The Late Late Toy Show
I bumped into Ryan Tubridy the other night at the An Post Book Awards and despite all my tactics – emotional blackmail, annoying high-pitched pleading voice, poking him in the ribs with my copy of Milkman by Booker-winner Anna Burns – I couldn’t get him to tell me the theme of this year’s Toy Show which is on tonight on RTÉ One at 9.35pm. He was sucking on throat lozenges however and did reveal he was nervous about singing a song during the opening scenes. Anyway, the next day I got a press release which tells me the theme in The Greatest Showman. Perfect.   So dig out your cosiest blankets, light the fire and make a small Everest of snacks on the coffee table. It’s Toy Show time! (If for some strange reason you are not watching it, follow the #LateLateToyShow on Twitter for the finest examples of hilarious Irish social media banter you’ll find all year.)

The Moving Crib
This is up and running now at St Martin Apostolate in Parnell Square, Dublin, which means it’s officially Christmas. December isn’t complete for many Irish people without a visit to this place which I remember being kind of scared by as a kid, but then I was always a bit contrary. The crib, of course, is much more than a crib, and tells loads of bible stories including Noah’s Ark and Adam and Eve through a uniquely mesmerising tableaux of German-made figures. Amazingly, the crib has been going for 62 years. If you haven’t been, make this the year you go to this Dublin institution which, even after all these years, is still free to visit.

Secret Santa
Let’s be honest, a bar of chocolate in the post beats a lot of presents you are likely to give and receive this Christmas so Cadbury Ireland are to be commended for their latest Yule-themed wheeze. They have a Secret Santa Movement pop-up shop on South William Street in Dublin where you can avail of their special Secret Santa Postal Service to send a bar of Dairy Milk anonymously or with a note bearing your name to a friend or loved one anywhere in the country. The idea is to encourage the notion of giving “just because”.

As well as the posting of chocolate, the experience includes building a custom selection box, becoming a real-life Secret Santa and enjoying a delicious hot chocolate while listening to live Christmas classics. Entry is free but there will be fundraising in aid of mental-health charity Aware.

Runs at 57 South William Street, Tuesday 4th-Saturday 8th December. For more see cadbury.ie/secretsanta.
PS If you can’t get to the Dublin pop-up, the Secret Santa Postal Van will be travelling around the country throughout December, allowing visitors to send their Secret Santa gift. The bus is making four stops in Sligo, Limerick, Kilkenny and Louth.

Mind that cat – and its impact on wildlife
5