Jennifer O’Connell: ‘Penneys has a special on Open To Meeting Someone underwear. Five for €3.50’

It’s convenient how Official Ireland chooses whether women are to be judged from the neckline up, or the belt down, based on the context 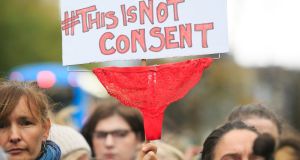 Protesters at the Spire, Dublin, calling for an end to victim-blaming in the courts in response to a barrister’s comment about a 17-year-old woman’s underwear during a rape trial. Photograph: Gareth Chaney, Collins

They’re not just knickers anymore though, not since they became yet another tool by which to judge women. You’ll have heard, by now, about the recent rape trial in Cork, in which a barrister asked the jury to consider the teenage complainant’s underwear. “Does the evidence out rule the possibility that she was attracted to the defendant and was open to meeting someone and being with someone? You have to look at the way she was dressed.

“She was wearing a thong with a lace front,” she said.

The man was unanimously acquitted after 90 minutes of deliberations. I’m not questioning the verdict, or suggesting the girl’s “thong with a lace front” played any part in the jury reaching it.

I am questioning the notion, which seems to be accepted by our legal system, that women use their clothing or their behaviour to signal sexual availability to passing strangers, like some kind of wily female take on the Masonic handshake, or a slightly more evolved version of baboons wiggling their engorged red buttocks in the air.

It isn’t a new one, or unique to that trial.

Forty years ago, in 1978, after an incident in which a 16-year-old girl was ferociously gang-raped by six boys in an empty house on Sean McDermott Street, having fruitlessly begged passers-by for help, the then-justice minister Gerry Collins said on radio that there were penalties for rape. “But, of course, so many girls are asking for it, you know.”

Asking for it, you know.

Writing about his comments afterwards in this newspaper, Mary Maher said that “from an early age, the responsibility for male lust is foisted on females. There they are, volcanic creatures, likely to erupt with unbounded sexual energy, blind and uncontrolled at any moment if provided with the certain stimuli.”

Boys and men are still treated by our legal system as slaves to their sexual urges, rendered helpless and insentient at the sight of “certain stimuli”. Women are still regarded as conniving, manipulative seductresses, lacy-thonged Eves in the garden of Eden. A thong can be a dangerous thing. So can a short skirt, or an inch of cleavage. Or just, you know, a human being with a vagina in the wrong place at the wrong time.

A few days after this court case, I was still seething – I may even have been engrossed in a mental audit of my own underwear drawer, deciding what needs to be thrown out (everything that isn’t grey, washed-out, or acquired within six months of having a baby) – when I bumped into an academic I know vaguely.

He was seething too. He’d just heard about the Government’s plans to introduce 45 women-only positions in universities.

I want to judge people based on what’s above the neckline, he said. Not what’s below the belt.

In an ideal world, it wouldn’t take 20 years to reach the Government’s gender equality objectives for higher education without some kind of quota.

But, my friend, look around you. We don’t live in an ideal world. Men have benefitted from unofficial gender quotas since the beginning of time. Jobs didn’t have to be advertised as only for men, because it was taken as read.

There isn’t a pipeline of qualified women, the academic said, echoing the same complaint made in every sector.

But it isn’t that women just wake up one day and find their ambitions have disappeared. It isn’t that we’re looking up at the cushy jobs and the giant pay packets and deciding we’re not interested.

It is that we step out for a moment to have our children, and find that the door has slammed a bit too firmly behind us. It is that we don’t see a path to success that doesn’t demand a price higher than we’re able to pay.

It’s convenient, isn’t it, how Official Ireland chooses whether women are to be judged from the neckline up or the belt down based on the context, and who it advantages at that particular moment in time? When gender quotas would give us a much-needed level playing field, they argue for gender blindness.

When we’re in a courtroom, asking to be heard, we’re reduced to what’s going on from the waist down: a short skirt or a lacy thong, a repository for men’s sexual desires.