Lives lost to Covid-19: Wicklow native was ‘full of mischief and a great judge of character’ 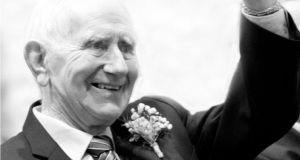 John (Jack) Kelly ‘always had a story to tell, and a joke to share. He was able to take the slaggings as good as he could give them’.

John (Jack) Kelly lived for most of his life in Ballyleague, Co Roscommon, and while a Rossie by choice he never lost touch with his Wicklow roots. He read the Wicklow People every week. He was born in Tinahely in May 1930 while his wife Nancy Doolin was born in the same month and the same year, in nearby Rathdrum.

They met in Rathdrum when he was working there as a mechanic, and emigrated to London, where Jack worked in construction. They married and had their first child, Eamon, in 1955.

But they wanted to come back to Ireland and did in 1957 when they moved to Ballyleague, where Jack worked with the ESB, first as a mechanical fitter and then as technical officer of maintenance.

They had three more children, Freda, Liam, and Mary. An outgoing couple, they were soon very involved with the local community with Jack a founding member of the local St Faithleach’s GAA club.

A close and devout couple, he and Nancy were regular volunteers at Knock Shrine in Co Mayo and visited Lourdes regularly. Both were also pioneers who led an active social life, “the last off the dance floor all over the place,” recalls grand-daughter Caitríona, “. . . at ballroom dancing!”

Their house was “always full of neighbours” and “they travelled the length and breadth of the country” when Jack retired. He was also “a great gardener and turned the garage into a studio where he made stained glass. It was a hobby.”

Caitríona also remembers her grandfather as “full of mischief and a great judge of character” with a nickname for everyone but herself. Two of his other grandchildren were known to him as “the Terrible Twins” while another was called “Spoon”, because he/she “was always stirring things up”.

Jack “always had a story to tell, and a joke to share. He was able to take the slaggings as good as he could give them”. As well as stained glass they “only discovered afterwards that he also kept a wide selection of a supply of sweet things in the garage too. He loved family events and never missed a Christening, Communion, Confirmation, wedding, birthday etc”.

Nancy’s death in 2013 was a big blow to him. “He used to visit her grave three times a day before going into Clover Hill (nursing home in Roscommon town). He was “very well looked after there as he was in Roscommon County Hospital, where he died on May 24th, just before midnight”, says Caitríona. Nancy, his wife, died on May 25th, 2013.