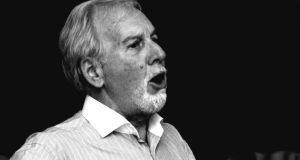 The worlds of Armagh GAA, the running of a hardware store, and grand opera at the highest levels came together in the remarkable life of the baritone Paschal Allen, who has died in London aged 87 after suffering from Alzheimer’s for several years before succumbing to the effects of coronavirus in April.

Allen was one of this country’s best-ever professional singers, a bass baritone who performed, after graduating from London’s Guildhall School of Music in 1963, with some of the best opera companies in Britain, including Glyndebourne; the Royal Opera House at Covent Garden, where he worked from 1982 until his retirement in 1997; and Benjamin Britten’s English Opera Company, which he toured with in the mid-1960s to many European capitals and to Australia.

Later, he performed regularly with the BBC on popular music programmes including Melodies for You, Friday Night is Music Night and Among Your Souvenirs, and also on RTÉ Radio. When negotiating his contract with the Royal Opera House in 1982, he asked not to be cast in leading roles so he could continue freelancing, although his characteristically dark and colourful voice would have allowed him to do so in relevant parts.

An important part of Allen’s career was in sacred music. He appeared regularly in oratorio

This did not prevent him from singing important roles opposite some of the most prominent names in contemporary opera, including, in 1983, as the Sergeant in Puccini’s Manon Lescaut opposite Placido Domingo.

Allen loved singing in a broad sense, especially English traditional ballads such as The Floral Dance; and, perhaps his favourite, Devonshire Cream and Cider, of which he made a collection for an LP as the record’s title. He also loved Irish ballads, particularly Where the Praties Grow, and Mick Maguire. A selection of these were collected by his wife, Sheila (nee McGrow), also herself a professional opera singer with Scottish Opera, and published as a CD in the 1990s under the title From Covent Garden to Co Down.

The couple met when they were both performing at the then famous Ledlanet Arts Festival in 1970 in Kinrosshire, held for several years in the grounds of the Scottish home of the renowned London publisher John Calder. They married in 1973 and settled in the London borough of Wandsworth, where Allen became a regular at the Wandsworth Society’s musical evening soirees. Iain Gray of the society, in a tribute to Allen in its newsletter, described how his friend had been “ever-present at society events, where he was always at the centre of lively and entertaining conversation”.

An important part of Allen’s career was in sacred music. He appeared regularly in oratorio, in Bach’s St John Passion and St Matthew Passion, and in Handel’s Messiah, performing with, among others in Ireland, Our Lady’s Choral Society and at the National Concert Hall. This pointed to his earliest roots in music, as a boy chorister at St Patrick’s Cathedral in Armagh. Allen grew up there, the eldest of six children of Thomas (Tommy), a hardware store owner, and Brigid (nee Fagan), a book-keeper. Both parents were keenly interested in music; Brigid played the fiddle in a local céilí band and Tommy was a dedicated collector of records.

A crucial influence on Allen’s career was the Belfast-based singing teacher Frank Capper, who heard Allen perform and strongly advised him to take lessons to learn breath control

Another son, Gervaise, also studied music at the Guildhall but earlier than his eldest brother. On a visit home to Armagh in 1958, he remarked that Paschal, by then active in the city’s St Joseph’s Operatic Society – where he had sung the lead, aged 19, in Gilbert and Sullivan’s The Mikado – was a better singer than any Gervaise had heard among his fellow students in London.

This encouraged Paschal to apply to the Guildhall himself, where he was accepted, and in due course graduated with distinction and with a teaching diploma.

However, before he left Armagh, a crucial influence on Allen’s career was the Belfast-based singing teacher Frank Capper, who heard Allen perform and strongly advised him to take lessons to learn breath control. Capper brought Allen into the Belfast classical music scene, including him in the Performers’ Club at Queen’s University and introducing him to musicians at BBC Northern Ireland, from which work in recitals followed.

One of Allen’s teachers at the Guildhall, Norman Walker, one of the best-known British bass baritones of the 20th century, remarked memorably to his young student: “I’ll retire when I find a better singer than me; I’ve found him.” On graduation, Allen was immediately taken on to the books of the famous Ibbs and Tillet agency in London, itself an indication of his by then growing reputation.

Allen was a late starter on his own professional musical journey for hard, practical reasons. His father died from typhoid when Paschal was just 14, and he left school at the local Christian Brothers to help his mother run the family business. Although he returned to the school briefly in his later teens, Allen disliked it, and returned to the shop, continuing to work there until he was 27, meanwhile achieving as much on the sporting field as in the concert hall, playing hurling for Armagh and excelling at cross-country running, winning several trophies for the latter sport.

He never lost contact with his roots; in 1991, the Armagh Theatre Group produced a recording, God’s Own City, featuring Allen’s work

London was a liberation for Allen, whose widow, Sheila, said last week that her husband thought his native Ulster was “a very repressive society”, although he eschewed politics. “He loved being in London, away from all the angst … he had so much admiration for the life over here [in London], where no one cared [what religion you were].”

However, he never lost contact with his roots; in 1991, the Armagh Theatre Group produced a recording, God’s Own City, featuring Allen’s work.

Paschal Allen is survived by Sheila; their son, Keiran, and his partner Sally Hotchkin; a grandson, Zachary Paschal; and by his siblings, Patrick Gervaise, Catherine, Aileen and Joseph. His sister Maureen predeceased him.