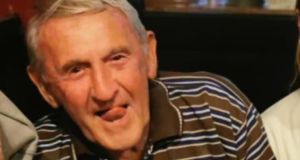 Gaelic football and traditional music were the twin passions of John Joseph Egan, fondly known as Sonny to his family and friends in Co Offaly and beyond.

Having decided against taking over the family farm, he worked for many years for Bord na Móna, initially digging drains and tapping the bog, later graduating to driving machines to mill and harvest the peat.

“He loved being in the outdoors, and he especially loved working with the crew, who were, in his words, ‘all auld country lads from different parishes in an area about 20 miles round’,” his daughter Annette recalls. “He loved the crack at the tea breaks, when there would be plenty of banter and ribbing.”

Away from the sports field, the cornfields and the peat bogs, “we worked hard and we played hard”, he would later reminisce. “I ate and drank, and I done everything under the sun. I lived life to the full, yes. And sometimes it nearly flowed over.”

Sonny kept up his beloved football as long as he could. He won the county championship with Ferbane’s minor team in 1949, and was on the junior team that won the 1952 championship and the intermediate team that triumphed in 1957 and 1959.

He adored all sports, but especially GAA. He had a great knowledge of Irish historical and footballing facts and he was regularly called upon by keen historians to fill in the gaps. All of this information was filed away in his head and readily shared with like-minded friends.

He teamed up with other local men to do manual farming labour for a while after leaving Bord na Móna. As he told it later: “There might be 10 or 12 men making the ricks of hay and then there’d be 20 men at the thrashing after that. The crack was mighty.”

In the mid-1970s, he reinvented himself as a hackney driver in his Morris Minor. He enjoyed meeting all kinds of characters and hearing all kinds of stories, good and bad. He measured the quality and enjoyment of an experience by the people he met along the way.

Later he worked for a number of years in the ESB power station in Shannonbridge and made lifelong friends with many of his colleagues.

At a dance in Mullingar in 1970, he met Agnes Olwill, from Co Cavan. The couple married and settled in Breehoge, near Ferbane, where they raised four children, Annette, Maria, Sean and Jimmy. He is also survived by his grandson, Daniel.

“He loved the view from his kitchen window out over the fields to the Slieve Bloom mountains,” Annette says. He and Agnes regularly went to hear traditional music, and often Sonny could be found joining in with a song. He had a great appreciation for traditional Irish music and would often listen intently to it for hours.

“He really was one of a kind; the mould was broken after they made him and his lovable personality”

When he wasn’t listening to trad music sessions online he was busy planning his next trip to the Canaries, where he was a regular visitor over the past 25 years.

Covid-19 restrictions limited attendance at his funeral in mid-May but the affection he was held in locally was evident as family, neighbours and friends lined the streets of Ferbane to pay their respects as the cortege passed on the way to the local cemetery.

“He really was one of a kind; the mould was broken after they made him and his lovable personality. His eagerness for life, his love of the land and of his family and his great interest in people and places will be his legacy for ever. He is greatly missed but will stay in our memories for ever,” his daughter Maria says.