Kay Marry obituary: Dressmaker with an artist’s eye for style

Lives Lost to Covid-19: She made beautiful clothes for family, neighbours and friends 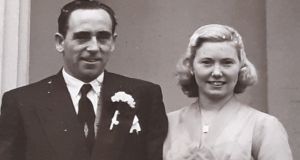 Francie and Kathleen Marry on their wedding day. Family members say they looked like Humphrey Bogart and Ingrid Bergman

Born in 1929 to coal merchants Tom and Molly Savage, Kathleen (Kay) Marry lived all her life on North Street in Swords.

Educated at the National School in North Street and the local tech school, Kathleen stood out for her sewing skills and, on her teacher’s recommendation, she began her dressmaker apprentice with Fitzpatrick Ateliers on South Anne Street. A skilled artist, she was frequently asked to sketch the fashions on display in nearby Switzer’s window.

Kathleen excelled in the art of dressmaking, which she continued to work at for the rest of her life. Always stylish herself, she had a great eye for the quality of the cut, a well-finished seam, a covered button, a concealed zip, the correct positioning of pin tucks and darts, the flare of a box pleat, the precision of intricate beading, turning a collar, cutting, pressing, letting out, and taking up. She could do it all.

Her Singer sewing machines were part of the furniture in her home, and she made beautiful clothes for family, neighbours and friends. She was uncomfortable taking payment, and never realised the worth of her exceptional work. Her own wedding trousseau included an exquisite dress in silk organza fashioned in the style of Grace Kelly, an icon of that era.

Her sense of style and interest in couture, fashion and shoes was shared with her granddaughter, Norma Jean. The pair – Kathleen then in her 80s – went on a family trip to London in 2020 to visit the Grace Kelly exhibition at the Victoria and Albert Museum.

In 1947, on a night out at the Sluagh Hall in Swords, the handsome and charming Francie Marry asked her to dance. He called her Blondie, and she liked the cut of his suit, and, more importantly, that he could dance. In photographs of that time, family members say he resembled Humphrey Bogart, she Ingrid Bergman.

They had a long courtship, unusual for the time, interrupted by her 18-month stay in a TB sanatorium. Francie was loyal to her during her illness, visiting her weekly and writing her letters. They married in 1955 in St Colmcille’s Church in Swords, and honeymooned in Cobh, Co Cork.

Four children followed, two boys and two girls. The sudden death of their youngest, Andy, in 1986 broke their hearts. They had a close bond with their grandchildren Ian, Ellan and Norma Jean and, later, Kathleen adored her great-granddaughter Faye.

In later years, Kathleen and Francie danced every Saturday night in Finns, the local GAA hall. Before their nights out, their house was filled with the sound of Glenn Miller, Nat King Cole or Ella Fitzgerald. They loved waltzes and slow foxtrots, romance and elegance. When Francie passed away in 1999, Kathleen’s strong faith kept her going.

In the last two decades of her life, Kathleen was up for every opportunity and social gathering. She spent summer holidays and Christmas breaks with family, and went on trips with the local senior citizens’ club. All her life, Kathleen was active and involved, from the Irish Countrywomen’s Association, the local historical society to participating in Senior Olympics in Copenhagen.

She loved dining out, and always read the menu starting from the desserts. She would never dream of leaving the house without applying lipstick and eyebrow pencil. In 2019, she and her best friend from childhood Maura Reynolds (nee O’Toole) both attended each other’s 90th birthday celebrations.

Kathleen contracted Covid-19 and died in hospital on April 8th, to the sound of her family’s voices over the phone, and Norma Jean playing a song she and Francie used to dance to, Stardust: “And I am once again with you . . . my stardust melody, the memory of love’s refrain.”