Everybody was surprised Aunt Anne became a nun: she was always more mischievous than mysterious

Leaving Ireland for Australia as a teenager in 1949 began a huge, ongoing adventure 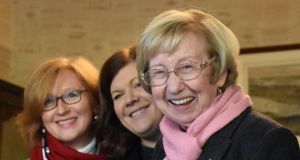 Everybody was surprised when my aunt Anne announced she was leaving for Australia to become a nun. For one thing, it was 1949 and going that far around the world basically meant there was a good chance you would never return to Ireland. Secondly, Anne was a free spirit who had managed to get to the age of 16 without ever showing any interest in religion. Thirdly, she was always more mischievous than mysterious.

There had been “incidents”. My personal favourite was the day Anne and her friend were told off by a local man for playing too loudly near his house. They took exception to this, and spent all of the following day building a dam on a nearby stream and successfully diverting it to flood the complainant’s house. There was also an “incident” involving matches, a hay rick and a massive fire – in that order. Anne thought she had escaped attention for that one until a local farmer dobbed her in to her father with the ominous words, “As sure as your name is Nugent, she’ll hang one day”.

Two nuns turned up at Anne’s school and, to her amazement, judged her to have a vocation. She cried a lot, but one of them said that was a real sign of a vocation

Looking back now, even Anne herself isn’t certain how she was persuaded she had a religious vocation. It was probably some confluence between having a mam who was hopeful – like most Irish mothers at the time – that one of her brood would be called by God, and some good salesmanship from the nuns.

The details sound disquieting at this remove. Two nuns turned up at Anne’s boarding school and interviewed the girls in turn. To her amazement Anne was judged to have a vocation. She cried a lot, but one of the nuns told her “tears are a real sign of a vocation”. They reassured her she would be able to fulfil her dream of becoming a teacher through them.

And so she boarded the boat for Australia. Once they arrived there were indignities and miseries that clearly clashed with Anne’s spirited outlook on life. They were forced to shave their heads and wear black in the searing heat. They spoke little and laughed less. All their letters, both coming and going, were read. Questioning authority often resulted in physical abuse. People were kept busy. One rulebook said that if you found you had a spare 15 minutes on your hands, you should report to mother superior and she would find a task for you. Idle hands and all that.

There were daily lectures on obedience and poverty. There were no newspapers, radios, magazines, books or access to a secular library, meaning the girls were cut off and adrift in worrying ways. One other novice told Anne that she had thought her periods would stop when she entered the convent – no such luck.

The treatment was harsh but being cut off from the outside world also served as an indoctrination. Those inside found it hard to imagine there was anything else outside. The unhappiness started to chip at her soul but to even speak aloud the thought of leaving the order was terrifying. On one occasion that she did get the words out, a mother superior told her she’d haunt her if she left religious life.

The only thing that sustained her was teaching. She adored it, particularly the music classes. It was her escape. She rose to become a principal in North Queensland and superior of the convent there as well, as her organisational and communication skills came to be more recognised and appreciated.

But at some point around that time she started to realise something – she didn’t need to be religious to be spiritual. She went to have a chat with the mother superior, who told her it wasn’t a good idea, as she was “over the hill”. Anne was 51 when she left the order.

Confused and scared, but determined, she came home for a few months to gather herself, then returned to Australia and landed a job teaching in Melbourne. She gradually started to enjoy being called Miss Nugent rather than Sister.

It was a Sister of Mercy who introduced Anne to Jim Ryan, her soulmate. Dancing classes and a brush with cancer brought them closer, and they married in 1986

Religion wasn’t quite finished with her, though. It was a Sister of Mercy who introduced her to Jim Ryan, her soulmate. Dancing classes and a brush with cancer brought them closer and they were married in 1986. They travelled and saw far-flung corners of the world together, before settling on the beautiful Gold Coast. After 32 years together, Jim passed away in 2017. Anne says she misses him terribly, and likes to talk to him as she walks around the house. He doesn’t talk back, but he’s a fine listener.

She came home to Ireland last October for a visit. A long journey for an 86-year-old. After a few weeks of exploring her old haunts, we threw a big party in her honour, inviting every relative and old friend we could find. It was a beautiful day. A group of us went to the airport with her a few days later to see her off, and she took the opportunity to chastise me with a grin. “You come visit me next, ya hear? I came all the bloody way this time.”