‘Kids in Foxrock play the violin, not Crumlin’: the school that’s changing lives through music

No Child 2020: Scoil Úna Naofa gives its pupils a chance to learn an instrument – free and in school hours 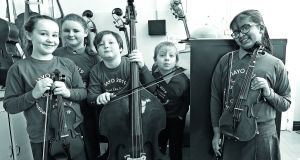 Pupils from Scoil Úna Naofa in Crumlin preparing for their performance in the National Youth Orchestra festival. Photograph: Marc O’Sullivan

There was no money in our house for music lessons when I was a kid. Yes, I know, get your tiny violins out and play a symphony for me.

I do seem to remember there was a piano in the sitting room once and I have hazy memories of it being smashed up with a hammer and used for firewood. Maybe that marginally increases the size of your violin?

Anyway, one of the things my partner (another musically deprived child) and I agreed on when discussing aspirations for our baby daughters was music lessons. It was, we felt, an investment in joy.

A gift to our children that they could share with others for their whole lives. The twins are nearly 10 and we still feel that way.

They’ve been going to the Royal Irish Academy of Music on Westland Row in Dublin for a few years now. On top of that wonderful, and yes expensive, education they get free music lessons at school. My children can read music the way they read Judi Curtin. When I’m not jealous, I’m thrilled.

The depressing thing is that being taught about music and owning instruments remains a serious privilege. Money for guitar or violin lessons is not a priority when you’re trying to figure out how to pay for basic necessities such as toiletries, school uniforms and food.

It’s yet another way poverty robs kids of opportunities and advantages that are handed as a matter of course to their better-off peers.

I think that’s why I was so moved by a recent visit to Scoil Úna Naofa – formerly St Agnes Primary School – in Crumlin, Dublin, where, since 2006, every pupil in the school gets a chance to learn an instrument – free and in school hours – starting when they are in junior infants.

In the large music room, the school orchestra was rehearsing for an upcoming gig at the National Concert Hall as part of the 24th Festival of Youth Orchestras. They’ve won a place at the festival, which is a big deal given that they had to compete with school orchestras from all over the country. The piece they were playing was There’s a Ghost in My Living Room and the choir provided a rousing accompaniment to the swooning strings.

There is a passionate and hard-working team behind all this of course. They are visionaries, really, and the Department of Education could learn a lot: from school principal Sr Bernadette Sweeney who wanders around whispering encouraging words to Zach Elliott dressed all in white (he’s playing the ghost); to Joanna Crooks who has been a powerhouse in establishing the music programme in the school; to Nicole Hudson who is patient and enthusiastic as she conducts the singers and musicians.

“Kids in Foxrock play the violin, not Crumlin,” Sr Bernadette told this newspaper nine years ago and, unfortunately, while there are lots of violins (and violas and cellos and harps) in Crumlin these days, her point is still valid.

They do it all by drawing in voluntary and paid tutors from the local community and fundraising for instruments.

Hudson tells me that the children often bring instruments into homes where there would be no tradition of music. To get families more invested, the parents orchestra was created.

In another room in the school’s music and arts community centre, men and women of all ages are playing a beautiful bit of Bach. These are adults, many of whom came very late to music, who are now learning alongside their children, grandchildren and younger siblings. It’s an orchestra for everyone in the community.

Back in the classroom I ask some of the kids what they get from their musical education. “I have more space and a bit more freedom, when I’m playing,” says viola player Ashley Deans (9). “When I’m upset I play music and it helps. All schools should do it, because it’s fun and you make friends.”

Eleven-year-old Fyodor Strigoun’s parents came to Ireland from Russia when he was a toddler. “I like playing, I like it best when I play good, The tricky part is getting your fingers in the right position but I am getting better. Now I am in a quartet and I feel happy about that.”

Brodie Byrne (8) started playing viola but didn’t like it so he moved to double bass. “People say the double bass has power over them but I have power over my double bass. Music gives me confidence and my parents are really happy that I have this.

“I am going to be really, really excited when I go to the National Concert Hall. I’ll be nervous but I’ll be confident too.” Ann Juliana Vijay (10) who plays violin is keen to point out what she sees as her good fortune. “I feel really lucky to be in this school.”

All children should be so lucky. The music being made in Crumlin is changing lives and it’s gorgeous, most of the time: It is entirely through my bad influence that when the rehearsal is over, the cellos and violins are persuaded to play a bit of that international earworm Baby Shark which, it turns out, sounds slightly less annoying on strings.

The 24th Festival of Youth Orchestras takes place on Saturday, February 9th, as part of the Irish Association of Youth Orchestras Festival. Some 500 young players from around Ireland, including the musicians from Scoil Úna Naofa, will play two concerts at the National Concert Hall at 3pm and 8pm. For more see iayo.ie

Some things to do with children this weekend:

You will have everything you need to create your very own traditional Brigit’s Cross and find out about the woman herself and her amazing cloak. Afterwards you can explore the Discovery Trail and enjoy a bite to eat in the Garden Cafe. 3pm, Brigit’s Garden Galway  brigitsgarden.ie

Spring knitting at NMI Country Life
This workshop is open to beginners and even to those like me who got given out to at school for making a knitted headband full of holes. (I’m still not over it.) Join the group to work on your knitting and crochet skills.

You can swap patterns and find out why you keep dropping stitches. No booking required for this drop-in activity for ages 7 and over. National Museum of Ireland, Country Life, Castlebar, Co Mayo, Friday, February 1st, 11am-1pm museum.ie