‘People in Ireland are kind and respect us. I don’t feel like I’m a refugee’

New to the Parish: Ramadan Alhusain arrived from Syria in 2018 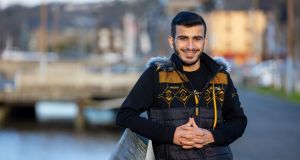 Ramadan Alhusain, from Idlib, in Syria, who was resettled here with his family from a Greek refugee camp nearly three years ago. Photograph: Dylan Vaughan

When Ramadan Alhusain arrived in Ireland with his mother and five brothers in February 2018, he had been living out of a bag for two years. The 22-year-old student admits he often feels frustrated when he reflects on the years he lost while moving between refugee camps in Greece, waiting for a European nation to accept the family for relocation.

“We had no education and no work in the camps. You are living without a home. You’re spending the winter in a tent and don’t have a place to take a shower or cook your food. You can see your future disappearing in front of you, and there’s nothing you can do about it. We spent nearly two years in Greece. I could have done so much with my life in that time.”

Alhusain was 13 when his father died suddenly, following a heart attack. The eldest child, he left school to find a job to help his mother support the family. He recalls working on the streets of Idlib as Syria’s civil war raged around him.

I was very shy about speaking. I didn’t want to make mistakes or for people to laugh when they heard me speak English

“You could die in one second in Idlib. You never knew what would happen next. You don’t know when a plane might come and bomb the street or you could be kidnapped. You don’t feel safe at all, but you have to work to survive. If you are not working you’re not eating, and there was no one else to help. My mother was 45 and alone.”

In March 2016, the Alhusain family left Syria and crossed the border into Turkey. From there, they paid a smuggler to take a boat from Izmir to the Greek islands, a journey Alhusain calls the death path. “It was very scary on that boat. The people who run them are mafia; they only want money and don’t see you as a human being. They put about 50 people into a boat. It was really dangerous.”

The family crossed the Aegean Sea by night and spent hours floating in the dark waters until a Greek police patrol picked them up. They were transferred to a refugee camp in northern Greece, near the border with Macedonia, where they spent the following three months. From there, they moved to a camp in the city of Thessaloniki, and in November 2016 they moved to Athens. Shortly afterwards, they were interviewed for relocation to another European country, and in May 2017 they were offered the chance to move to Ireland.

“They told us at the time it would take three months to come here, but we had to wait eight months. It was a long time, and I was scared we wouldn’t make it. Your life is not in your hands – someone else is making the decision of what will happen to you.”

The Alhusains were accepted for resettlement in Ireland under the State’s Irish Refugee Protection Programme, which was set up in 2015 in response to the migration crisis unfolding across Europe. Under the programme, the Government committed to accept up to 4,000 refugees, primarily Syrians based in Greece, Lebanon and Jordan.

You never know when you might become a refugee. You can reject one today, but tomorrow you could end up as a refugee yourself

These new arrivals do not go through the regular direct-provision system but are assessed before travelling to Ireland and then housed in one of two emergency reception and orientation centres, in Ballaghaderreen, Co Roscommon, and Clonea Strand, Co Waterford. (A few are also accommodated in the Mosney direct-provision centre, in Co Meath.) They do not face the same processing delays as asylum seekers from other countries and are usually moved into long-term housing within four or five months.

The programme has been commended for the support its offers refugees, and the Catherine Day report, published in October, and recommending what should replace direct provision, advised that the Government “build on the positive experience” of the programme in developing a new system.

More than 3,500 people have come to Ireland through the programme’s various strands, including 195 Syrians who arrived in late November. This latest group was selected after Irish officials travelled to Beirut in March to carry out interviews. (The process was put on hold following the global outbreak of Covid-19.)

Alhusain describes February 8th, 2018, the day the family flew into Dublin, as “the happiest day” and “a dream”. It’s hard to believe this confident young man, who speaks with such ease, had very little English when he arrived. “I was very shy about speaking. I didn’t want to make mistakes or for people to laugh when they heard me speak English. I studied hard and do my best. Every time I learned a new word I wrote it 100 times.”

Despite the relief of finally being in Ireland, life in the Roscommon centre was sometimes challenging. “It was difficult living with so many refugees. It’s not really a hotel; it’s a camp for refugees. It felt like everyone was in my room, and I like to be private in my home.”

In November 2018, the Alhusains moved into a house in the village of Rosbercon, on the border between Kilkenny and Wexford. One hundred and fifty-four Syrian refugees have been resettled in Kilkenny, according to Respond, a group offering assistance to refugee families in the area.

Alhusain says local people have been welcoming and kind. “I’m not just saying that because I’m speaking to you,” he reassures me. “We talk about this between us Syrians. I never thought I’d be treated the way I am in Ireland. They are kind and respect us. I don’t feel like I’m a refugee in Ireland.

“It’s important for the community to know us; many people don’t know anything about Syrians. We want to let them know more things about us, and we can learn more about Irish people.

“You never know when you might become a refugee. It happened during the second World War: we had refugees come to Syria. And the Irish were refugees in America and Canada. You can reject a refugee today, but tomorrow you could end up as a refugee yourself.”

Alhusain is studying business administration through a VTOS course while his brother works in the local chipper in New Ross.

Alhusain used to want to work in politics but now would prefer to go into journalism. “I want to show people the pain others go through,” he says, adding that he’d like his brothers to become teachers and doctors.

His mother is also happy in her new Irish home. “We are safe now, that’s what’s important,” he says. “It doesn’t matter whether it’s in Africa, Asia or Europe. If you’re safe, it’s home.”