International Men’s Day: What’s it all about? 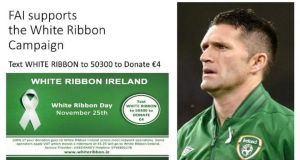 International Men’s Day: the FAI, a White Ribbon ambassador, supports the campaign each year with a key match

“We want a sense of belonging. Men and women, we all want to be part of something, and are looking for a sense of identity. For a man, for a lot of people, it can be a real struggle to admit feeling a bit lost and isolated. We’re getting so much better about being men and sharing our thoughts and feelings.”

So says Barry Sheridan, head of the Irish Men’s Sheds Association, about the importance of today’s International Men’s Day, which celebrates the value men bring to the world, their families and their communities, highlights role models and raises awareness of men’s wellbeing. It also encourages men to teach the boys in their lives the values, character and responsibilities of being a man, according to the day’s website, which stresses that it’s “only when we all, both men and women, lead by example that we will create a fair and safe society which allows everyone the opportunity to prosper”.

Men’s Sheds, a community-based organisation, sets out to create a friendly and inclusive environment where men can gather and work on meaningful projects, with the overall aim of improving men’s health and wellbeing.Sheridan points to progress, saying men are now “way more open talking about issues, feelings, the things going right in their lives, or going wrong”.

White Ribbon Ireland gender-equality seminar
Dr Steeven’s Hospital, Dublin; 10am-1pm; free; tickets here
The Men’s Development Network and its White Ribbon campaign address gender equality in society, health, law, advocacy and men’s conversation. This seminar, hosted by the Health Service Executive, has a great line-up of contributors. The barrister (and Irish Times columnist) Noel Whelan speaks about positive changes in Irish gender-equality law, including the new domestic-violence law; the director of the National Women’s Council of Ireland, Orla O’Connor, will speak on women and men working together towards gender equality; Fergal Fox of the HSE discusses the national men’s health action plan, as well as plans to to support a women’s health plan; and Minister for Health Simon Harris talks about gender equality and a healthy society.