The beam from Baily lighthouse helped my mother sleep again

Hilary Fannin: In praise of the continuing importance of Irish lighthouses 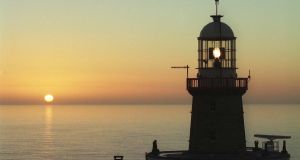 After the bailiffs had taken the furniture, after the bank had repossessed the house and my older siblings had departed, after the nuns had expelled me from school and I had waved goodbye to my friends, we moved, my parents and I, to a rented cottage perched on the edge of a cliff.

It wasn’t the most auspicious start to our new life. I was 11 or so, my world had been knocked sideways, and I was lonely. Unsurprisingly perhaps, the domestic wars between my parents were slow to abate. But abate they did over the course our first year in that small, low-slung cottage that looked almost ready to catapult itself off the cliff face.

I attribute whatever peace was found there to the winking lady across the inlet, the Baily lighthouse, whose metronomic beam swept through the salty windows with soothing, almost tranquillising regularity. My mother, who had arrived at our rickety and obscure new abode in a state of high anxiety tempered by various prescribed narcotics, soon threw away her sleeping pills. She told me many years later that it was the lulling, beneficent beam from the Baily that showed her how to sleep again.

The spotlight (if you’ll forgive an awkward analogy) seems to be on lighthouses at the moment. RTÉ’s moving documentary Great Lighthouses of Ireland, which told a story of romance and mystery, and of the continuing importance of lighthouses to this country, has just come to an end. And in July of this year there was a moment of nostalgia when the existing light at the Fastnet lighthouse was replaced by an LED lamp placed on the roof, thereby reducing, much to the disappointment of some coastal residents, the range of the beam by almost 10 nautical miles.

Maybe we are collectively waking up to another lost certainty. As the west Cork artist Geraldine O’Sullivan said recently: “The lighthouse keepers thought they were ordinary people doing ordinary work, but in fact they, and the lives they lived, were extraordinary.”

There are no full-time lighthouse keepers in Ireland any more; families no longer live in keepers’ cottages. Their histories are becoming confined to archives, and a way of life so integral to the maritime community no longer exists. But we are an island nation and somewhere in our psyche, I think we understand the importance of these haunting and often inhospitable places. Maybe now we need to give those edifices and their memories some of the protection that they gave us.

Recently, I was at O’Sullivan’s exhibition Light Keepers, which was previewed a month or so ago at the Galley Head lighthouse in Co Cork. Geraldine, who is an old friend, spent three years travelling the coastline, researching the stories of the surviving keepers and their families, many of whom are members of tenaciously courageous families who were with the service for generations. Light Keepers is a selection of paintings and “lifescapes” based on some of the narratives she felt privileged to have heard on her journey.

Those narratives are full of hardship and adventure, from the pre-20th-century world when light keepers’ families lived and died on rocks such as the Skelligs and Eagle Island, and women went ashore just twice a year, weather permitting, to buy fabric, wool and leather to make and repair their families’ clothes and boots, to more recent remembrances from the Galley Head itself.

Mary Ruth McCarthy was 13 years old and living in the Galley Head when she and her sister were woken from their sleep by two explosions that flooded their bedroom with pink light. This was followed by their light keeper father coming in to invite them down to the kitchen, where 11 survivors of a sunk German U-boat were cheerfully drinking chicory coffee. It was the end of the war, Mary Ruth later wrote, and “if they were seamen and not soldiers, as my father described them, they would have known they were in neutral Irish waters”.

The men were later detained in the Curragh. Mary Ruth remembers them being escorted from the keeper’s cottages, having left behind gifts of strange-tasting white chocolate and pemmican, a dried, powdered beef.

Anyway, I mention all this now because O’Sullivan’s exhibition is currently running at the Lexicon Library in Dún Laoghaire, until January, before travelling to Westport and then back again to Cork. It’s free of charge, it’s intriguing and timely, and there isn’t a Cheeky Charlie in sight or a whisper of Westlife’s Christmas album.