Longford man was agent for future taoiseach Albert Reynolds in 1977 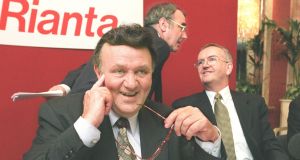 Noel Hanlon, a successful but mercurial entrepreneur from Longford, who has died in South Africa, aged 78, was associated with Albert Reynolds and the so called “country and western wing” of Fianna Fáil.

After becoming prominent nationally specialising in manufacturing ambulances in the bleak midlands of the 1960s and 1970s, he became adept, through political connections, of acquiring chairmanships of State companies in the turbulent 1980s and 1990s. These included Foir Teoranta, the business rescue agency; a director of Aer Lingus; chairman of the VHI; and chairman for two terms of Aer Rianta, the national airport authority, while declining to accept payment.

In his later years he retreated to Cape Town, following a bruising battle with minister for transport Séamus Brennan, remembered in boardroom folklore as “the brandy and cigars” controversy.

Born in Longford town, he attended St Mel’s College and sat his Inter Cert, but not being academically inclined, he left at 16 to work in his father’s filling station on the Dublin Road. After a disagreement with his father, the restless Noel emigrated for work experience with Ford in Detroit, the world automobile capital.

On his return to Longford in 1960, he took over the family business. In the mid-1960s, he began importing van chassis from Britain and fitted them out as ambulances in an expanding factory beside the family garage, eventually employing 300. By the 1970s, he was supplying Longford-made ambulances to 60 per cent of the NHS fleet in Britain and was exporting them also to conflict zones in the Middle East and Far East.

Success cast him, some might say unfairly, as a nouveau riche character. He purchased a top of the range car and a Georgian-style house with a swimming pool. He frequented Eamon Farrell’s pub ordering cigars and brandies – and doshing-out lavish tips for his favourite attentive waiters – before going to dinner with Albert Reynolds or another local notable.

O’Hanlon’s anti-trade unionism invited industrial trouble in 1988 over a rationalisation plan, but rather than negotiate with the unions, he put the factory into liquidation with debts of £1,361,007. Hanlon was noted for having a two-way glass in his office so that he could see out, but nobody could see in.

In 1980, Hanlon bought Manford, a struggling clothing manufacturing business in Ballymahon, which prospered by selling chic coats and fashionable suits for gentlemen until it closed in 1990 with debts of €413,425.

Turning his talents to politics, Hanlon was election agent for Reynolds, when the future taoiseach was first elected a TD in 1977. His period as a boardroom magnate followed but his flair for showmanship continued. Frank Lahiffe, in his book on Séamus Brennan, A Life in Government, recalls how, in 2002, Brennan, on being appointed by Bertie Ahern as minister for transport, was targeted with “unusual correspondence” from Hanlon in his capacity as chairman of Aer Rianta. Brennan interpreted these as “veiled threats to undermine a democratic government’s plans to provide a second terminal at Dublin Airport”.

In December 2002, the Sunday Independent alleged that Aer Rianta had procured €5,000 in brandy and cigars as a gift to the minister for transport’s office in the late 1990s when Brennan headed that department. Suspecting a smear against him from within Aer Rianta, Brennan ordered an investigation. In today’s Trumpian language, the story proved to be fake news: the investigation found “not one single shred of evidence in support of the allegation”.

In 2004, when he presented four departing directors of Aer Rianta with £9,000 watches as gifts, the Labour Party was outraged. Hanlon had to pay for the watches himself.

In 2008, Hanlon liquidated his investment company PNM Hanlon Ltd, leaving him with more than €2.2 million in cash as well as a large property portfolio. He left Longford to live in Craigavon, Co Armagh, with a new partner and their young son and later he moved to Cape Town.

Last summer he visited Longford when he was suffering from the cancer that killed him. The story was told of him that when he reached the age of 70, Hanlon discarded his 22 wigs; and so on meeting him by chance in Cape Town, an acquaintance from Longford realised he was seeing a bald Hanlon for the first time.

In a tribute to Hanlon, Longford Fianna Fáil county councillor Joe Flaherty said: “He will be remembered as a visionary businessman.”

His wife and his partner, neither of whom was named in his death notice, also survive him.

On your bike: Good-value areas to buy a home a short cycle from central Dublin
6

During lockdown I did not bake, teach myself anything or read a book
8

What will €350k buy in Dublin and Co Tipperary?
Real news has value SUBSCRIBE