New to the Parish: Apoorva Gopinath arrived from Bangalore in India in 2019 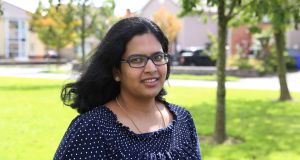 When Apoorva Gopinath moved to Ireland in March 2019 she believed she would be able to practise as a doctor within a year. A trained GP, the Indian doctor left her home in Bangalore after her husband, who has a PhD in physics, was offered an engineering job in the west of Ireland.

Having previously researched the British health system in detail for potential opportunities, Gopinath thought the Irish system for foreign doctors would be similar.

“Frankly, when this opportunity came up I didn’t think things in Ireland would be very different to the UK. I knew I had to do a couple of exams before working as a doctor in England and when I researched Ireland it said I had to pass certain exams too. I also needed to do an English equivalency exam so I got that done before I came here. I was prepared to stay at home, study and get my registration in a year so I could start working again.”

On arrival in her new home in Tuam, Gopinath immediately started studying for the PLAB exam which is used by the Irish and British medical councils to ensure doctors with qualifications from abroad have the right skills and knowledge to practise medicine here. In September she travelled to the UK to sit the first part of the exam which cannot be taken in Ireland.

“I submitted my documents in October and got a reply saying I was eligible in January. The second exam only takes places twice a year here in contrast to it regularly happening in the UK. I was due to sit it in March but then because of Covid it didn’t happen. The next exam is supposed to happen in October but we still don’t know if it will go ahead.”

The first member of her family to become a doctor, Gopinath had undergone five years of training in family practice medicine and had been working for two years before she moved to Ireland. Shortly after her arrival with her husband, Gopinath discovered she was pregnant and registered with a local GP.

“The fifth doctor we contacted was able to take us; all the others didn’t have any space to take on new patients. When I told my new GP that I had also worked in family practice she said ‘that’s fantastic, we need more GPs in Ireland, we have a shortage’.”

However, Gopinath’s plan of continuing her career in general practice in Ireland fell apart when she discovered doctors who trained in India were not eligible for training programmes. “I found out that once I had taken the exams I could only get an SHO [senior house officer] post and probably move up to registrar but that I couldn’t get onto the GP trainee scheme. So that was very difficult.

“I understand that GP training in India is not equal to here but I don’t mind doing the extra three to four years of training. Unfortunately that opportunity is not there.”

She contacted the Minister for Health in early 2020 requesting clarity as to why she couldn’t train as as a GP in Ireland and was told in a reply that legislation was being prepared which would “remove the requirement to hold the equivalence of the certificate of experience for entry to the Trainee Specialist Division of the register”. The Regulated Professions (Health and Social Care) Bill, which contains this amendment, is currently before the Seanad in its fourth stage.

'In India you have lots of family around you and wouldn’t have to think twice about who is going to mind the baby. But here it’s just me and my husband'

Gopinath is trying to stay positive and continues to study hard to pass the second medical exam so she can work in an Irish hospital. During her pregnancy she kept busy by volunteering with Age Action at the local library where she helped elderly people use electronic devices.

“I got a new student every five weeks and taught them whatever they wanted to learn about the smartphones, iPads or laptops. I made some very good friends who spoke a lot about what it was like growing up in Tuam. I did it to have something to do rather than studying at home all the time, and it was an amazing experience.

“A lot of them have children living overseas and the joy on their faces when they came back to say they’d spoken to their granddaughter in Australia was very nice.”

In February, Gopinath gave birth to a baby boy they called Anirudh. Her husband’s parents flew over from India to help out for the initial few weeks but got stuck in Ireland after the country went into lockdown. Gopinath’s parents, who were due to visit for March and April, have not yet met their grandson.

“In India you have lots of family around you and wouldn’t have to think twice about who is going to mind the baby. But here it’s just me and my husband. Currently he’s working from home so that’s a great blessing. If I need a break he’s there for me.”

Gopinath was “very impressed” by the support she received from midwives during the pregnancy and after she gave birth. The local Tuam community have also been very helpful, she adds. “I came from Bangalore which is a big city with lots of traffic, big buildings and pollution. When we came to Tuam I was quite taken aback at first that it was such a small place. But I loved the greenery and as I got to know people I realised it was very friendly place.”

Despite settling in well to her new home, Gopinath is frustrated that she is still unable to work. “I had mentally prepared to have everything sorted in a year. Two years is probably the maximum I can sit at home without a job. But of course now we don’t know what will happen with Covid.”

She has spoken to a number of non-EEA doctors who have relocated to Northern Ireland and Britain for work so they can develop their medical careers.

“I’m trying to be optimistic that the exam will happen in October, and if not, next March. After that, if it doesn’t happen, we may just have to look at the UK. Even though we love the people here and love the place, I may have to move across the Border where they are more opportunities for me, like many doctors have done previously before me.”

We would like to hear from more people who have moved to Ireland in the past 10 years. To get involved, email newtotheparish@irishtimes.com.
@newtotheparish