New to the Parish: Edi Oliveira arrived from Brazil in 2010 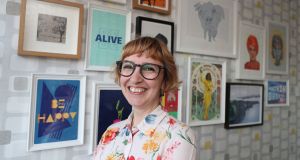 Edi Oliveira: ‘I’m white, I didn’t have any experience of racism from before and when it happened I didn’t even recognise it as racism.’ Photograph: Nick Bradshaw/The Irish Times

Edi Oliveira had spent nearly a year in Dublin studying English when she returned to her native Brazil in the spring of 2011. The events manager from Sao Paulo had arrived in Ireland the previous May to improve her English but only planned to spent 12 months in the country.

“I had a career in Brazil and the next step was to get a second language which was very important. I had studied tourism and events management in Brazil and even before I finished school I was working in the events industry.”

Oliveira found Dublin very small after a life spent in Sao Paulo. “Because of the business I was in, we worked 24 hours a day. Sao Paulo is so big that if you want to do your grocery shopping at 2am, the supermarket is open. If you want to watch a movie at 3am, there are cinemas open. We have a whole world that works at odd times. But then I came to Ireland and everything closed at 6pm.”

She had heard Irish winters were mild and was not prepared for the big freeze that gripped the country in late 2010. “It was very cold and damp; as you say here, I could feel it in my bones. It was such a long winter, there was still snow in March and I got depressed. I remember looking around and there was no life in the trees.”

Despite these challenging moments during her first stint in Ireland, Oliveira started feeling at ease for the first time in her adult life.

“When I reached Dublin it was the first time I had to stop and think about my life. I was 34 years old, I wasn’t the average English language student in their 20s. The idea was I’d go back to Brazil and pick my life back up where it had stopped. It was like a gap year for me. But when I went back I didn’t feel myself. I didn’t fit in anymore.”

Three months later Oliveira boarded a flight back to Dublin. She found a position working with people with disabilities and special needs at Camphill Communities - an international organisation where people with and without disabilities live and work together.

“It was a life changing experience in may ways. It’s a shared community and the idea is everyone can contribute. I learned I didn’t need to be busy all the time; that you can have a different rhythm and still get things done. It taught me patience and I saw life from a different angle. I’m very much a city person and suddenly I was in Co Monaghan in the middle of the countryside.”

Oliveira ended up spending four years with Camphill and moved back to Dublin in 2015 where she started dating an Irish man. She was offered a spot on a master’s degree in disability studies but her application to renew her Irish immigration stamp was refused. Despite having the support of Camphill in her application, Oliveira had to return to Brazil.

“It was terrible. I had just been accepted onto a master’s, I worked for an organisation that I cherished and I didn’t have a life back in Brazil. Of course I had family and friends but I didn’t have a career, my life had changed.”

Oliveira and her Irish boyfriend continued their relationship over long distance and he visited Sao Paulo a couple of times. In March 2016 she returned to Ireland on a tourist visa and the couple started to talk about marriage.

“It was conflicting but I didn’t want a long-distance relationship and we weren’t young, we had some maturity. Neither of us really wanted to get married but we wanted to be together and didn’t have another option.”

Oliveira briefly returned to Brazil to work for the 2016 summer Olympics and then flew back to Dublin in October. The couple were married in January 2017 and Oliveira started looking for work. She attended numerous interviews but was repeatedly told she wasn’t the right fit for the positions.

“You start asking yourself what’s wrong with me, why don’t I fit? Maybe I wasn’t as skilled as I thought. It was a very challenging period. I’d always been so independent but now I relied on my husband. I started to question my identity, my confidence was gone.”

During her job search, a recruiter suggested she use her husband’s Irish surname rather than her own Brazilian name on applications. “I didn’t do it. It was like being questioned not only on the basis of my race but on my sex as well. It felt like I wasn’t enough as a woman or as a foreigner.”

Oliveira eventually secured an administration job but only stayed a few days. “Until then I only ever had good things to say about Irish people but for the first time in my life I was the target of racism.

“The person responsible for me said the position might not work because English wasn’t my first language. I’m white, I didn’t have any experience of racism from before and when it happened I didn’t even recognise it as racism. But it really compromised my work. I became scared to pick up the phone because I believed what he said about my English.”

After handing in her notice, Oliveira applied for a postgraduate degree at DIT (now TU Dublin) in marketing and management. She also started developing her artistic skills, drawing prints which she began to sell online.

“In Brazil we say Brazilians never give up, so I haven’t. I saw it as an opportunity to skill up and I started to do art to express my feelings. I realised I could express things through art that I didn’t have the language for.”

Oliveira is now doing a PhD, works as a carer for elderly people, lectures in marketing and continues to sell her prints through her own website. “When you are looking for work as an immigrant I’ve discovered there are certain jobs people here think it’s okay for you to do. Working with the elderly is one of those jobs.”

Developing her own business in Ireland is still very challenging. “In Brazil I had lots of contacts and doors were open for me. In Ireland, it feels like the opposite. I don’t have that social network and opening doors can be very hard. But I’m contributing again and that makes me feel useful and good about myself.”