New to the Parish: Journalist Joseph Okoh arrived from Nigeria in 2019 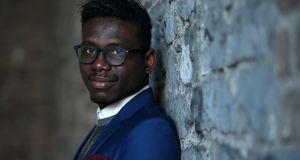 Joseph Okoh never planned on becoming a journalist when he was growing up. After finishing school, his goal was to work in a medical lab but he ended up studying agricultural sciences instead.

Okoh was in his 20s, and had graduated from university, when he started seriously asking himself what kind of career he wanted to pursue. “I’d never really taken the time to think about it before and was kind of forced into studying agriculture because of the quota system in Nigerian universities. I wasn’t wired for farming and started thinking about things that would make me happy.

“I loved to write and speak and was passionate about social issues. I was also tired of seeing corruption in Nigeria and didn’t like how people were taken advantage of. For so long people in my country were being silenced so I decided to go into journalism. I didn’t just want to watch things happen, I wanted to bring issues to people’s attention.”

While his classmates from college entered the paid workforce, Okoh started over by doing unpaid work for local TV stations. As time went on he built up a portfolio and moved from Edo State in southern Nigeria, where he had grown up and gone to school, to sprawling metropolis of Lagos where he secured a job with a large TV network.

“I basically did everything – production, reporting, I even stumbled into presenting. I covered crime, politics, religion and social affairs.”

On one occasion Okoh was sent to interview Nigerian migrants who had been deported from Libya back to their home country. “That story really stuck with me. These people had left Nigeria with high hopes of better opportunities. They had been promised good jobs but some of them died along the way because they didn’t go legally and others were forced into prostitution. People with degrees worked as cleaners.

“It opened my eyes to the horrors some people go through and it put a fire in my belly to research more about Nigerians travelling abroad and immigration.”

Many of those he interviewed had lied to their families about the reality in Libya, he says. “Most people who travel abroad are forced to live fake lives, they tell them they’re okay because they fear they’ll bring shame on their families.”

After three years in Lagos, Okoh started investigating journalism master’s degree courses abroad. He settled on Griffith College in Dublin after learning he was entitled to a two-year visa to find work in Ireland after graduating. Using his own savings, and with some financial support from his parents, he paid for the course and flights to Dublin.

“My parents were very supportive; they wanted the best for me and wanted me to get the best qualifications. They also felt working in journalism in Nigeria was very risky compared to Ireland. There’s more press freedom here.”

Okoh arrived in Dublin in October 2019 planning to find a place to live on arrival. He ended up spending the first fortnight sleeping in a classmate’s kitchen and then was tricked into paying for an illegal sublet in a house-share. “I paid the guy in cash and he gave me the keys but the day I arrived the flatmates told me he couldn’t sublet. I’d given him €900, I felt so naive and was devastated. But his flatmates were very helpful and got the money back for me. They were international students as well, they understood what it’s like.”

After eventually finding a room in Finglas, Okoh settled into working on his assignments for the year. “It was really tough at the start because of the accommodation situation. It’s difficult to focus in lectures when you don’t have a place to live, and assignments were piling up all the time. I’d be in class physically but my mind wasn’t there. But in the end I found a balance and enjoyed my lectures.”

He was about to begin a documentary for his dissertation when the Covid-19 pandemic hit Ireland. “I was supposed to interview people for my documentary. It was really tricky studying online but my lecturers helped and we found ways to cope with the situation.”

Having worked in warehouses to pay the bills before the pandemic, Okoh found a job with Dublin Bus sanitising handrails when the virus arrived. The Nigerian student wasn’t too bothered by the work, saying he would do “any kind of job” while studying, as long as it paid enough to cover bills.

Okoh also set up a YouTube channel featuring interviews with Ireland’s immigrant community to develop his Irish journalistic experience while providing a platform for migrant voices. Following his graduation in November, he immediately started sending out CVs to TV and radio stations.

He’d noticed the lack of diversity in the Irish media and hoped his previous experience in Nigeria and first-class honours degree would appeal to Irish employers. However, he has yet to receive a response from any organisation.

“I’ve applied for jobs where I know I’m qualified and I see friends get calls but I never get called for interview. I don’t know whether to call it racism but I feel I need to work twice as a hard to get a job, it’s really frustrating. I keep applying but get no response. I keep asking myself, what else do I need to do?”

While he has enjoyed living in Ireland so far, Okoh was deeply disturbed by the racist abuse directed towards George Nkencho’s family following his death in December.

“I’ve always known Ireland to be welcoming but when I saw those things happen it broke my heart. People should really show more compassion to a family who are grieving. The death of George Nkencho has really opened my eyes to what parts of Ireland are like. I have a feeling the number of racists in Ireland is beginning to grow.”

Okoh believes more reporting from more black journalists on Irish radio and TV would provide audiences with a real, authentic insight into the migrant experience in this country. “I just want Irish people to know we are human beings first. I’m convinced I can contribute to the Irish economy and I’m convinced of my talents. I feel with the number of applications I’ve sent out I should be getting more opportunities. It doesn’t have to be in front of the screen. I’ll do production too. I’ll work in any role.”