Hilary Fannin: No-side literature made me hurdle the garden wall to return it to its sender 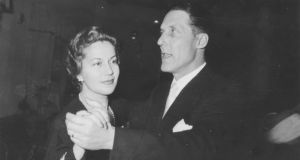 “I wanted to tell her that after decades of living in the detritus of Irish solutions to Irish problems, I’m tired of women’s bodies being thrown around the morality ballroom like rag dolls.”

Sadly, but somewhat inevitably, the cat never did receive one of the 600 bevelled and gilded wedding invitations to the nuptials of Prince Happy and Princess Sparkle, which for some reason she has been gleefully anticipating these past few months.

She’s pretty cut up about it. She’s right off her pea purée and chia seed pouches, and seems unable to drum up the energy to stalk and shred the toilet rolls.

She dreams big, you know? She’d been hoping that since her conversion to clean living (she’s given up eating baby sparrows and spends a lot of time washing her bottom), she might have been chosen by Princess Sparkle to be maid of honour. But Sparkles decided to do away with a maid of honour altogether, and have a flock of cherubic petal-scatterers in sensible footwear follow her up the aisle instead.

The cat was distraught.

“Is it,” she whispered, gazing up at me through her cataracts, “because I’m old and furry?”

“Is it,” she blurted, choking, “because I can never be an underdog?”

“Princess Sparkle loves underdogs. Its reported in all the papers. I’m trying diligently to be an undercat though. I’ve been under loads of things today: a parked car, three chairs, the laundry basket, that hat from Ulan Bator you like, which smells like a hungover goat . . .”

A wedding invitation may not have arrived on the mat, but a whack of glossy and graphic literature from the No campaign, opposing the repeal of the Eighth Amendment, had. This compelled me to hurdle over my garden wall in an effort to repatriate the package with its sender.

“I think you may have dropped this,” I said brightly when I caught up with the woman in the pink jacket that had the word “No” emblazoned on the back, as she and other volunteers went door-to-door in my neighbourhood.

I agreed with her about it being a very serious issue, and explained to her that, whatever her literature might say, I will be voting Yes to repeal.

I wanted to tell her that after decades of living in the detritus of Irish solutions to Irish problems, I’m tired of women’s bodies being thrown around the morality ballroom like rag dolls. I simply believe that it’s a woman’s right to choose whether or not she wishes to terminate her pregnancy. Whether for medical or other reasons, to me abortion is a personal issue.

Courage of her convictions

But the lady with the luminous “No” on her back had more undecided minds than mine to sway, and walked away. I had to acknowledge her doggedness; she had the courage of her convictions, if not the taste for dissent.

Anyway, I hurdled back over my garden wall to continue my conversation with the cat, only to find her somersaulting around the messy kitchen with a look of beatific joy on her gnarled little face.

“It’s arrived, it’s arrived!” she chirped. “Look! This landed on the mat while you were chasing the lady down the street! This is it! It’s pink, and there are pages and pages of writing! And look at the picture of the lady in a veil with the tiara on top of her head – that’s Princess Sparkle, isn’t it? And this one of the bearded man whose heart is on fire! That must be Prince Happy, right? And there are pictures of smiling babies – they’re probably the flower girls! This is my wedding invitation! Isn’t it?”

It’s not easy to explain The Curate’s Diary to an elderly pussy. It’s actually not easy to explain the publication to anyone who hasn’t perused its energetic contents. Issue number 398, which arrived free through my letter box despite the 70-cent cover price, unsurprisingly devotes its entire contents to the pro-life position. There is a great deal of writing on sin, and some on visions of purgatory, and some on the work of Satan. There are calls to fast and pray, and a warning not to waste resources sending pro-life literature to pro-choice politicians, so as not to give them the opportunity to develop counter-arguments. Unlike the high-spec anti-abortion publicity that had arrived earlier through my post box, The Curate’s Diary struck me as a strangely outmoded, even nostalgic, piece of work, a remnant from another time.

“I’m sorry,” I said to the cat, “but hang on to your fascinator. Whatever happens, the next couple of weeks are going to be a bumpy ride.”