Hilary Fannin: Watch out Gwyneth and Meghan, it's time to splatter the blogosphere with a dose of suburban realism 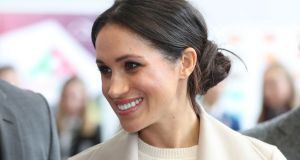 Meghan Markle is the former author of her own lifestyle blog, 'The Tig'. Photograph: Niall Carson/Pool/Getty Images

Inspired by the examples of my old segotia, the lifestyle guru Gwyneth Paltrow, and Meghan make-mine-a-chia-seed Markle, former author of her own lifestyle blog, The Tig, I’m strongly considering becoming a guru myself.

I appreciate that the competition will be tough. Paltrow and Markle are certainly not short of material when it comes to filling the column inches. Paltrow, for example, is just back from throwing a bachelorette party in Mexico with her mates, who include among their number Beyoncé and Cameron Diaz. I’m sure they all had a blast, lissom Gwynnie lashing into the egg-white omelettes and coriander juice while the gals horsed into the tortillas and tequilas.

Gwynnie, having consciously uncoupled from her previous squeeze, Coldplay frontman Chris Martin, is rumoured to be on the cusp of marrying Brad Falchuck, a pleasant, stringy-looking television writer and man of many cardigans. Doubtless the couple will have numerous healthy years ahead in which to pulse their aduki beans.

Meanwhile, back on the sceptred isle with its very own moat around it, the Queen is reportedly considering giving Meghan Markle a wedding present of a royal title. Seemingly, one of the corgis suggested gifting the American divorcee the duchy of Connaught, which makes a controversial change from a toaster but is not nearly as good as a gift token for John Lewis.

In preparation for the launch of my own lifestyle blog, I’ve noticed a commonality of experience between Paltrow and Markle that I’m not sure I can live up to. Both women have bevies of rich, influential and well-waxed female friends. Both have lotsa leggy besties to drink prosecco with on rooftops. Both sport legions of air-kissers with whom to celebrate pre-nuptials, or share yoga retreats, or eat red snapper while looking out over the fetid Mediterranean and chatting about a life sprinkled in environmentally friendly fairy dust.

I’m not saying that my own friends aren’t dear to me; they are, truly. But they have been known to let their pedicure regimes slip, and I honestly can’t vouch for the state of their bikini lines. The other week, one of them even borrowed a tenner from me to put on the Grand National.

My adventures with an €8.99 bottle of Cab Sav are white-knuckle stuff

Another absolute must for a lifestyle guru, besides glamorous mates, is the desire to over-share in the culinary department. To be a successful blogger and have the fashion industry throwing free designer clothes and shoes at you, one has to cultivate an avid interest in what one sticks in one’s maw.

Before Ms Markle joined The Firm, for example, she occasionally wrote about wine, The Tig itself being named after a cheeky little Italian she favoured called Tignanello.

I could do that. My adventures with an €8.99 bottle of Cab Sav are white-knuckle stuff.

I plan to regale my readership with daring tales of how I wake at 6am, dribbling into my pillow, and thrash around for the glass of water I’d strategically placed on my bedside table, only to find the shagging cat has her whiskery little face in it and is slurping away merrily. I’m living on the edge, man.

And who needs to know any more than they do already about broiling quinoa, or infusing jackfruit, or pickling their own calabash, when I can tell them everything they could ever wish to learn about stand-and-stuff tacos?

Seriously, though, I stood on the doorstep yesterday, scraping dog shit off the bottom of my shoe with an old bit of bamboo that I found in a plant pot, and asked myself: “Is this it?” I looked around at the unweeded, dandelion-seeded garden, at the flaking paint on my front door, at the alarming blood-red stain below one of the bedroom sills where my son had unsuccessfully attempted to spray-paint his shoes by holding them out the window and pressing down hard on the nozzle, and asked myself: “Really? I mean . . . is this really it?”

I wouldn’t mind, but I don’t even own a dog. Someone else’s dog had obviously taken one look at the place and decided to trot in and dump its breakfast under my withering daffodils.

Maybe, I thought,  it’s time to splatter the blogosphere with a dose of suburban realism.

In a homage to my two mentors – Gwyneth Paltrow, who, inspired by her initials, calls her lifestyle website Goop, and Meghan Markle, who came up with the aforementioned, ever-so-catchy The Tig, I’ve decided to call my offering “HufF”. Or maybe “The HufF”.

Yep, those complimentary arch-support loafers will be winging their way to me, tootie sweetie.

Turbocharge your barbecue: Tips from the pros for cooking over flames
8

Ignatius and Mary O’Connell obituaries: ‘They died together. There's some small solace in that’
10