There are worse things to fear than Friday the 13th 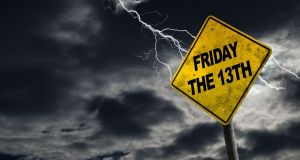 'Someone once told me, in a dark bar, that all the hoopla about unlucky connotations surrounding the number 13 was to do with the 13 steps leading up to the hangman noose.'

Big day for all the friggatriskaidekaphobics out there, eh? In this largely inclement, unpredictable month, on this the 13th day of a rain-soaked April, and what with it being a Friday, well, there be fear abroad, let’s not deny it.

The sun might be splitting the snowmen in your neck of the woods but, regardless of a break in our capricious weather, for certain members of the weary populace; rain-wrinkled, blinded by sea-mist and lightly blushed by a shy sun, today’s date is a thing to be feared far more than the heretofore absence of spring.

There are people out there, waking up this morning, putting one lilly-white foot out of scratcher and quickly withdrawing again, to the safety of their fetid sheets, as soon as they remember the date. Friday the 13th! Time to panic about open umbrellas drying in the bath and the catastrophic consequences of new shoes on the kitchen table.

I’m not superstitious. I’m many other things; shortsighted, greying around the temples, unattractively grudging of others people’s success and prone to falling asleep in front of The Great Celebrity Bake Off, but I’m not one of those people who thinks that if I go out and get my wilting tresses cut on Friday the 13th, there’ll be a the death in the family.

Common or garden paraskevidekatriaphobiacs – another very long word for the fear of Friday the 13th – however, of whom there are, I read, surprisingly many, worry themselves sick about the dire possibilities that today’s date unleashes. These are people who fear magpies more than Trump’s foreign policy. Normally sane people, suddenly labouring under the suspicion that taking a ferry to Llandudno today will end in maritime disaster, or that passing someone on the stairs might be the last move they’ll make, without the assistance of a pair of crutches.

As someone who believes that there is nothing predetermined in this world, bar death and an increase in the television licence, I struggle to see the point in all the fuss. What’s the point in attempting to bluff a non-existent fate?

“Okay Fate, I won’t walk under ladders and you don’t give me an incurable disease, dandruff or a parking fine.”

Good luck with that mate. I’m sorry to be the bearer of bad news but sating the gods is probably going to require more than a pinky promise. Didn’t beleaguered mortals chuck in their first born in order to cut a bit of slack from raging destinies.

It’s the lack of specificity accompanying the dire predictions that gets me down. What exactly is supposed to happen if you push your spoon through your empty eggshell, or step over three successive drains, or have 666 tattooed on to your sagging backside?

Is a coven of witches going to jump out from behind the wardrobe and knit you to death if you put your jumper on inside out? Are you going to get a tax audit if you trip over a sluggish magpie?

Someone once told me, in a dark bar, that all the hoopla about unlucky connotations surrounding the number 13 was to do with the 13 steps leading up to the hangman noose. A chilling image that put me right off my Sauvignon. One immediately challenged however by a bloke with a cloven hoof, asserting that the unlucky digit was all down to Judas rocking up at the last supper in his brother’s creepers and kipper tie.

The explanation for a deep-seated fear of the number 13 that I favour, was told to me by a splendid woman who lived in cottage in the bowl of a beloved mountain, with numerous goats and one young lover.

The number 13, she said, was revered in goddess-worshiping cultures. Thirteen, corresponding in the solar calendar, to the number of menstrual cycles a woman had in a year.

“And we all know,” she whispered, startling the crows from the trees, “how men fear menstruating women.”

“Do they?” I asked gingerly.

“Oh yes,” she answered, going on to quote Pliny the Elder, from his not unpoetic Natural History: a novel work in Roman literature she assured me.

It was new one on me, I had, unfortunately, yet to encounter Plinys thoughts on menstruating women;

“Her very look will blunt the edge of steel, and take away the polish from ivory. A swarm of bees, if looked upon by her, will die immediately.”

That’d be some power to reclaim, eh?

To hell with the advertisements for fragrant young women in panty pads, parachuting from planes when they are having a period. I know a few lassies out there who’d rather be blunting the edge of steel. No matter what the shagging date.

Irish whiskey is the toast of National Organic Awards
10