‘I love being in the company of people, it’s my favourite thing to do’

In Conversation: Tonie Walsh and Brian Finnegan, friends with a GCN connection 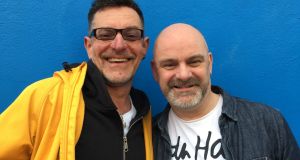 Tonie: Tarifa in Andalucía, which I call the nipple of Spain, where the Med meets the Atlantic. I was introduced to it by two lesbian girlfriends from Dublin. It’s been my bolthole for the past 15 years and where I took my mother when I knew she was dying.

Brian: Mine is a house in Rosscarbery in west Cork that I’ve been going to once a year with a group of friends since 1993. The same four people, every year. We’ve gone through major things in our lives together over that period of time, and when we walk into that house it’s like walking into the safest, most wonderful and supportive space.

Tonie: It would be amazing to take a group portrait every year.

Brian: We have a shot for every year.

Tonie: A Bridget Reilly-style monochrome shirt I bought in Arnotts’ bargain basement about 20 years ago. It puts me in a certain type of mood every time I wear it.

Brian: Mine is a royal blue velvet 1970s jacket with huge rounded lapels. It reminds me of a bag of clothes my aunt’s husband who used to be in showbands gave to me. It’s also very slimming, which is good.

Brian: The book I’ve read more than any other book is To Kill A Mockingbird. The other book I return to is At Swim Two Boys by Jamie O’Neill. What I love about it is it’s a queer reading of the Rising, a rare book in that it celebrates homosexuality rather than vilifies it.

Tonie: I tend to return to Armistead Maupin’s Tales of the City, when I’m in need of some brightness and warmth. But during the past year and a half I’ve been going back to Diarmaid Ferriter’s compendium on the 1970s [Ambiguous Republic]. It’s my go-to reference, quite amazing, very easy to dip in and out of. It’s my decade, I was a teenager finding myself. I still think it was a fabulous decade in Ireland, but everything was breaking down, we all were dirt poor, when you look back on TV reportage it’s Soviet drabness, but it was really exciting; music, cinema and TV were pushing boundaries.

Brian: My mother had fabulous clothes.

Tonie: There was a smell of change.

Can you guess what the other person’s go to drink is?

Tonie: I’d put you down for a glass of dry, crisp white wine.

Brian: You’re not right about me at all. I can’t drink white wine, it gives me heartburn. But I do love an Aperol spritz. You like a really good gin and tonic.

Is there any artist you feel particularly connected to right now?

Tonie: Tara Flynn wowed me at Where We Live in The Complex [in Dublin]. She’s on fire at the moment and she’s owning it.

Brian: I’m beyond excited about seeing Alanis Morissette during the summer. I think it’s a really good time to revisit Jagged Little Pill.

Tonie: Speaking of people revitalising their careers, ABBA! Come on!

Brian: I wrote a whole book about ABBA.

What do you spend most of the time doing in an airport?

Brian: I love reading in airports. It’s a place I don’t really go on screens. I feel like I cut myself off from the world the minute I walk through security.

Tonie: I carry a journal everywhere. I’ve been keeping one since 1976, so I try to jot down stuff. But I spend most of my time looking at people in airports, looking at people watching other people. I love that. Is that a bit creepy?

What do you think is the best TV show of all time?

Tonie: Six Feet Under. David Norris initially put me on to it. It transformed public understanding of mortality.

Brian: Queer As Folk, the Channel 4 version. It was such an exuberant representation of a way of being.

Tonie: It was quite revolutionary actually.

What do you think is your most dominant characteristic?

Tonie: I have an awful big mouth which can get me into trouble. My passion for life can often come across as intensity. I know some people have a problem with that.

Brian: I’m a very social being. I love being in the company of people, it’s my favourite thing to do.

Tonie: As a baby gay said to me a couple of weeks ago when he found out I was 57, “you’ve got about 20 summers left”.

Brian: Now I know what I worry about. Jesus. That’s hardcore.

Tonie: I walked away from it thinking, “I’ve got so much I want to do! I really need to hurry up”.

Brian: I’ve discovered once I started admitting this to people that a lot of people have the same worry, and it’s homelessness. It’s to do with my age, the fact that I’m single, that I’m not on a traditional path where there’s two people making a home. It has grown to be a worry of mine. Someone said to me in work the other day, “if you want to give yourself an anxiety attack, go on daft.ie”.

What word do you most overuse?

Brian: The kids are alright.

Tonie Walsh is the founding editor of Gay Community News (GCN), Brian Finnegan is the current editor. GCN is crowdfunding an exhibition to celebrate its 30th anniversary on fundit.ie/project/gcn30-exhibition