Hilary Fannin: There is a look that is so ubiquitous it somehow defeats genetics 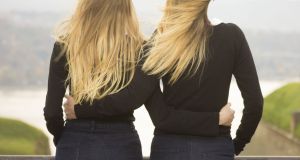 'Us fiftysomethings, we never looked like that, did we? We were never so perfectly groomed, were we?'

The sun came out for longer than 10 minutes. I went for a walk on the beach; it was positively balmy. Heartbreak lovely, as a matter of fact.

Small curly children were standing in rock pools looking entirely staggered by the darting goby fish. A nappy-bottomed baby sat at the water’s edge smacking the sand with his fat fists and shouting at the egrets. Another bloated-bottomed baby tottered towards him, gathering speed as he headed for the shore, and bit him square on the sun hat.

There were so many fluffy little brown-eyed dogs, all sporting neckerchiefs and various bits of bling, trotting up and down the beach, dragging their owners behind them and smelling each other’s fragrant backsides (the dogs, that is, not the humans) that it looked like they were having a canine convention. One four-legged confection in particular, its fall bunched up with pink ribbons, its eyes perfectly rimmed in black kohl, looked so like Zsa Zsa Gabor I nearly ran after it to ask for an autograph.

There is something poignantly optimistic about Irish beach life after an endless bleak winter, something nostalgic about varicosed ladies on faded rugs in floral bathing suits and cardigans, about elderly men with freckled pates standing on one knotty leg under tented beach towels, absorbed in the complex dance of the single-handed undress.

Maybe it is the absolute likelihood of a spring shower, the certainty of a sudden downpour, the strong possibility that any minute now it’s going to hailstone on your ham sandwiches, that lends such a tentative, tender quality to people’s enjoyment.

Anyway, I was walking home from the fish shops on the harbour, treading the shallows, carrying my shoes and swinging a bag of cut-price hake around, when my Arcadian musings were cut shore by an eyeful of aggressive beauty.

Three young women had just arrived on the beach, had spread out rattan mats and candy-coloured towels, and were standing in a slipshod triangle, removing bits and pieces of pretty clothing until, bikini-ready, they turned to survey the horizon through the enormous panda lenses of their jet-black sunnies.

Sleek, shiny, toned and tall, the trio, all of whom looked to be in their early 20s, appeared almost airbrushed. If it hadn’t been for the wind chill and a nearby family with flasks and jam sandwiches, a framed copy of the Proclamation, two antimacassars and three rivalrous milk-white children trying to asphyxiate each other in coffins of sand, we could’ve been in Miami.

We – I know I’m taking liberties here – I mean people of my generation, us fiftysomethings, we never looked like that, did we? We were never so perfectly groomed, were we?

I have no memory of myself or my cohort ever achieving that kind of glamour and accomplishment. In my memory, we weren’t so terrifyingly evolved. For a start, we all looked different from one another: our teeth wonked in different directions, our hair frizzed and bobbled to a music of its own. We definitely had noses. We sometimes sagged in borrowed bikinis and sometimes managed to look alluring in our brothers’ washed-out shorts. (Speak for yourself, says you).

The three graces on the beach the other day, surveying the horizon and its dusting of greenish cloud with a look of petulant disappointment, were all remarkably – albeit gloriously – similar. It’s something I notice now: there is a look that is so ubiquitous it somehow defeats genetics. What is that? How do they do it? How come many of the the millennials I see have symmetrical faces and horizontal thighs, and arresting eyebrows, and fingernails worth framing? Are we modifying our children, like crops?

Maybe it’s all down to yogalates and protein shakes, and expensive dentistry, and exfoliation and education and dating apps that can predict the viability of passion like farmers can predict the weather. Who knows, it may even be that the gilded youth are gorgeous because they’ve been suckling on all the mad hybrid fruit you can buy in German supermarkets. Hell, maybe it was the absence of fun-sized cucumbers that held me back from reaching my beach-body apotheosis in the gloomy old days of yore.

One way for another, I hope it all stays fine for them, for all of us.

I shoddily need some sunshine.

Paul Flynn: How to cook the perfect chowder – don’t use flour and keep it simple
3