We knew the news was bad when the telegraph boy arrived

Family Fortunes: I don’t think my parents ever got over the loss of my eldest brother 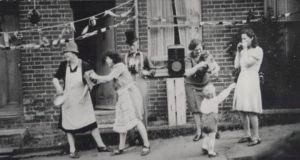 “The lady playing the mouth organ was my mother, and I have been told that the small child reaching up to her was me.”

This photograph was taken at a VE Day celebration in May 1945 in the small market town of Hitchin in Hertfordshire, England. The lady playing the mouth organ was my mother, and I have been told that the small child reaching up to her was me.

My parents had moved to Hitchin from London at the outset of the war, and rented a small house on a terrace that ran down a steep hill.

I remember that hill as once the local kids put me in a handmade cart and let it off down the slope. I have a scar on my forehead as proof. It was a poor area, but very close to the edge of town, so there were many adventures through the nearby corn fields and lanes full of wild flowers especially wild violets. When I smell the hawthorn blossoms in the spring or see violets I am always transported back to that time.

It was also a place where everyone helped each other out, sharing joys and sorrows in equal measure. My mother was known on occasion to give a neighbour our rent money, as they were behind and threatened with eviction. My father used to get very frustrated.

During the war years, the big dread was the telegraph boy on his bicycle turning up into the street from the bottom of the hill to deliver the terrible news of a family loss.

Apparently he only had to appear when the word flew up the street and everyone would pile out on to the pavement to see where he stopped, and be ready to offer help and sympathy. One day he stopped at our house [toward the top of the hill] and we received the news that my eldest brother had been killed whilst flying on a mission over Germany. He was 19 years old. Coincidentally, he died on my second birthday.

I don’t think my parents ever got over this loss, coming after the death of two small sons in the preceding years [from diphtheria]. My mother, always fragile in health, died at the young age of 45.

I have been back to visit the street of so many memories. It has been “gentrified” now, and all the nearby fields are spreading estates, but my memories and the feelings they engender never fade.

Who is responsible for repairing a dangerous boundary wall?
8