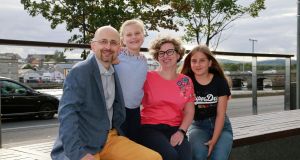 When Wojciech and Monika Kostka’s daughter Maja began junior infants she was one of the only children in the school with Polish parents. Born in 2006, Maja’s birth coincided with the large influx of young Poles moving to Ireland following the expansion of the European Union two years previously. In her class in Gorey, Co Wicklow there was just one other boy with Polish parents.

“The Polish people moving to Ireland were quite young so Maja was one of the first children born here,” remembers Monika. “Her picture was even published in a Polish magazine. There were so many people coming to Ireland that Polish journalists became interested in how they were setting up in a new country.”

The couple, who are from the region of Silesia in southern Poland, moved to Ireland in 2005 after Wojciech was offered a job with an EU agency in Dublin. Three years previously, when the 2002 census was carried out, there were just 2,124 Poles living in Ireland. By 2006 that number had risen significantly to 63,276 Poles living in the country.

The number of Poles in Ireland would rise another 94 per cent to 122,585 by 2011 and five years later, Poles would be recorded in the 2016 census as the largest non-national group in Ireland with 122,515 living in the State.

While the couple found the country to be a welcoming place, Wojciech initially struggled with the style of communication in his workplace. “I remember having to adjust to not saying things directly but going around the subject. That nuanced way of talking was a big challenge for me.

“Irish people are very nice and smile a lot but they’re not direct and they’re shy about saying what they think. It can be frustrating and very time consuming. For me it’s not better or worse than other types of communication, it’s just different and as time passed I got used to it.

“Personally I now feel I can work better with people because I’ve experienced different attitudes and different approaches. You become more sensitive when you move abroad as to how you communicate with people.”

Monika, who took a break from work after her daughter was born, says it was easy to meet friends through the local mothers and babies group. “When you have small kids it’s not that difficult to make friends and when Maja started school a lot of the other parents also wanted to meet new people. My impression is the Irish are very open in that way. They don’t leave people isolated, there was always someone coming over to speak to me.”

A few years after the couple arrived in Ireland, and shortly before the birth of their second daughter Ewa, the Irish economy suddenly took a turn for the worse with the 2008 economic crash. “We are very Irish in the way we’ve experienced life in this country,” says Wojciech. “We fell into all the same traps following the Celtic Tiger collapse and in a way that made us very aware of the life of a typical Irish person. It also made us very interested in the country’s political and social life. We went through the recession with friends who became unemployed and lost their homes. Thankfully my job was quite secure but we were all scared.”

The family still live in Arklow and four years ago were involved in setting up the annual PolskaÉire festival which promotes the relationship between the Polish and Irish communities through cultural, sports, business, academic and community events. Last year the festival expanded to Poland where celebrations were held in the Kostka’s hometown of Ruda Slaska.

“Because the festival in Ireland was growing so fast I asked Monika why don’t we take another step and bring it to Poland,” says Wojciech. “We were delighted the local town was so interested in helping put the festival together which to our surprise was hugely successful. It was about creating a special event in Poland which is not about us showing Ireland off or Polish people showing off Poland but the two joining forces.”

The couple also set up the Polish-Irish Educational Association to promote the integration of Polish people in Irish society which includes a “complementary” weekend school for children. While the couple speak Polish at home with their two daughters, they wanted to create an environment where the children of Polish immigrants could meet and speak the language.

“Our older daughter was bilingual from day one but we didn’t want our daughters to lose their language,” says Monika. “We realised there must be other Polish families who wanted to teach their children about their roots so when their child grows up they understand why we have cultural differences.”

In 2014 the Polish weekend school opened with 35 children attending and by last year there were double that number in the classes. “It’s a balancing act because we have different families; some want to move back to Poland, some are multicultural families, some want to stay in Ireland.

They have different attitudes about how they’ll pass on their Polish identity so we’re not trying to push in any specific direction. We just want to show the richness of Polish culture and give them the full freedom to decide who they are.”

Maja, the couple’s older daughter, identifies as completely Irish while their younger daughter is more comfortable calling herself Polish. “Maja has English-speaking friends and she’s a teenager now so she wants to be one of them,” says Monika. “We’re happy she’s found her roots. For her Ireland will be what Poland is to us; the place of your childhood where everything is care-free and you’re surrounded by people who love you.”

The family spent a lot of this summer in Poland but are back in Ireland now for the new school term. “We are privileged that we can live in both places, we do the festival in Poland and live in Ireland,” says Wojciech. “Even if we do move back to Poland someday Ireland will never stop being our home.”

“We never knew we would end up living abroad so we’ll see what the future brings,” adds Monika. “But for our daughters Ireland is home. Our oldest daughter is so devoted to this country so she will definitely stay and we will stay where our kids are.”