‘I suddenly feel like Robin Williams in Dead Poets Society’

Ross O’Carroll-Kelly: It’s portly my responsibility to deal with the triplets’ swearing 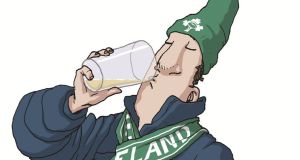 And, after an hour of non-stop flipping and blinding, all of the sweets have gone and the rewarding of good behaviour scheme has hit its first major snag.

One of the proudest moments of my life happened about six months ago in the cor pork of Stillorgan Shopping Centre, when the great Jordi Murphy looked me square in the eye and uttered a single word to me. That word was, “Teacher!”

I should possibly add that Honor disputes this version of events and I’m only mentioning it in case she says it in her blog. She claims that what he actually said was, “Tch!” in response to my efforts to reverse pork into a space in front of Donnybrook Fair.

But, hey, I know what I heard. And it was lovely to hear it as well, because my talent as a passer-on of knowledge slash wisdom has possibly not received the recognition it deserves over the years?

My old schools rugby coach had a gift for bringing the best out of people. I remember him warning me, as I sized up a kick: ‘Miss this one and you’ll burn in hell’

I was thinking about this the other morning when I sat down with my famous Rugby Tactics Book and pen in hand to try to come up with a strategy to stop the triplets from constantly swearing all the time? Sorcha’s plan of just ignoring it until it hopefully one day stops clearly isn’t working, since they’ve been basically borred from every child-friendly establishment in this city. And, as their father, it’s kind of portly my responsibility to maybe do something about it.

As usual, in situations like this, I storted to ask myself what would Father Fehily do? My old schools rugby coach had a genuine gift for bringing the best out of the young people in his chorge. And it’s well I remember him warning me, as I sized up a kick: “Miss this one and you’ll burn in hell.”

Unfortunately, Brian, Johnny and Leo aren’t scared of hell. As a matter of fact, they’re not scared of anything, which is why I decided that my approach would have to involve more carrot than stick.

So here’s what I end up doing. I buy 12 lorge bags of peanut M&Ms, then I sit down on the sofa and stort eating them in front of them. Brian is kicking Leo, who has Johnny down on the ground in a headlock, but it only takes a second or two for them to notice that their old man has treats.

And I’m there, “Because these sweets are for children who don’t use language like that?”

Leo – who’s the thinker of the three – goes, “Gimme a focking sweet – please.”

“But I want a focking sweet.”

“Sweets are for kids who say ‘flipping’ instead of ‘focking’.”

Leo is just, like, staring at all the yellow packets on my lap and salivating like a butcher’s dog. I throw another one into my mouth and go, “Mmm. The candy coating and the chocolate and – whoa! – the peanut at the centre.”

And he’s suddenly there, “Gimme a flipping sweet.”

So I do. I take one out of the packet and I pop it into his mouth. As he chews it, he looks at his two brothers in what can only be described as, like, wonder?

“Gimme a flipping sweet,” Brian then goes, “you focking focker.”

I’m like, “Not until you ask me without using that word.”

“Gimme a flipping sweet,” he goes, “you flipping flipper.”

I suddenly feel like Robin Williams in Dead Poets Society.

But Leo’s like, “Flip you, you flipping flip-dog. You had the last flipping one.”

Brian calls him a flipping motherflipper and Leo tells him to flip off or he’ll flip him up – and flip him up good. And I’m thinking, ‘Wait till Sorcha sees this’ because it’s definite Father of the Year stuff.

But suddenly I can’t keep up with them, keen as I am to reward them every time they don’t use the other F word. I’m just, like, throwing the M&Ms at them every time I see an open mouth. And, after an hour of non-stop flipping and blinding, all of the sweets have gone and the rewarding of good behaviour scheme has hit its first major snag.

“The flip do you mean they’re gone?” Leo goes. “Go out in the flipping cor and buy some flipping more, you stupid flipping flip.”

But I’m there, “I think you’ve all maybe had enough.”

“Shut the flip up. I’ll tell you when I’ve had e-flipping-nough.”

“You’ve eaten 12 bags between the three of you. And you don’t look well, Johnny.”

Johnny points at me. “You,” he goes. “You’re only a flipping-,” and then he stops mid-sentence and I watch him blow out his cheeks, once, then a second time. And then, without any further warning, he throws up all over Leo.

So now Leo is suddenly covered in mashed-up peanuts and chocolate and multi-coloured candy and he’s not a happy rabbit. His response is to grab Johnny in a headlock again and drag him to the floor, going, “You focker! You focking focker!”

I’m suddenly looking down the side of the sofa cushions to see did I maybe drop one or two down there.

And seeing all of my hord work being undone, I’m suddenly shouting, “Stop swearing! Stop using that word!”

And it’s then that Sorcha decides to make her entrance. She arrives home from work, sticks her head around the living room door and goes, “Ross, I thought we agreed that we weren’t going to create a taboo around that word?”