Godfrey Jeremiah arrived from Nigeria in 2018. ‘It was that period of heavy snow’ 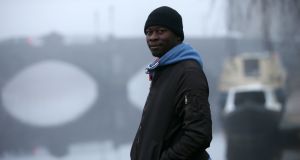 Godfrey Jeremiah: “I know there are a lot of opportunities in Ireland, the problem is just the stamp issue.” Photograph: Laura Hutton

As a child, Godfrey Jeremiah preferred pulling his toys apart rather than just playing with them. He would set aside each segment and rebuild his own, more technologically advanced version, of the plaything.

Education was not strongly valued in Jeremiah’s home. No one expected this young boy from Nigeria’s Delta state would study at third level.

“My childhood was quite challenging. My parents broke up and my dad’s work – he was a captain on a ship – meant he’d be away for three or six months at a time. The environment I grew up in didn’t encourage education. But I was very good at drawing and repairs, and people realised I needed to stay in school.”

As Jeremiah grew older, his parents started saving money to pay for his education. After graduating from high school, he moved to the south-western state of Osun where he became the first member of his family to attend university.

“I wanted to become a professor of physics – that was my dream at the time. I spent five years on my degree, but when I graduated I wanted to start something new.” Jeremiah decided to set up his own technology business and also started teaching IT skills to students.

At first, I wasn’t interested in coming because I had a plan for my business and there were graduates at the university looking up to me

In 2013 he met Olaitan, a pharmacist who had recently graduated top of her class and was working as a lecturer at the university. The couple started dating and were married in early 2015. “I told her our marriage should not stop her education, that it should actually boost her. I encouraged her that if there was any opportunity to study abroad she should take it.”

A year after the couple’s first son was born, Olaitan was offered a fully funded PhD in neuropharmacology at the Royal College of Surgeons in Dublin. She moved to Ireland in 2017, and Jeremiah spent the following 10 months trying to raise his son while continuing his IT business. His initial plan was to remain in Nigeria and visit his wife a couple of times a year during her studies. However, it quickly became apparent that his son needed his mother.

“I could see she was starting to feel very lonely, and it was troubling me. At first, I wasn’t interested in coming because I had a plan for my business and there were graduates at the university looking up to me. But then someone reminded me I shouldn’t be separated from my wife at my age.”

Jeremiah eventually decided to move based on assurances from his wife’s friends in Dublin that there were plenty of jobs for tech workers in Ireland. He arrived with his son in February 2018.

The family was unable to live in the one-bedroom apartment where Olaitan was staying and found a small apartment in the city. However, within three days they were asked to move when the landlord announced she needed the room for visiting relatives.

“It was that period of heavy snow in 2018 but she said we had to leave straightaway. I was so angry. When I asked my wife if there was a written agreement she said they didn’t sign anything. So we started looking again. Most landlords didn’t want families, and we were rejected for several places.”

After the family eventually found a room in a woman’s house in Lucan, Jeremiah visited the Irish Naturalisation and Immigration Service to confirm his spousal visa.

“I was optimistic because I had been told IT professionals wouldn’t have any problems finding work. But I was given the Stamp 2A. I was confused, I couldn’t work? How could we survive as a family in Ireland if I couldn’t work? My wife got a monthly stipend of €1,500 but this wasn’t enough to pay rent and all our other costs.”

I was getting a job interview almost every week but by the end of the interview, when I tell them about my stamp, that’s it

While partners of workers who come to Ireland on a critical skills permits are now entitled to a Stamp 1 visa, which allows them to apply for work, Jeremiah had come here as the spouse of a full-time student. Stamp 2A, which he received, stipulates that holders cannot “work or engage in any business, trade or profession”.

Jeremiah was told if he entered full-time education he could become eligible for Stamp 2 and work part-time during term-time. However, the high cost of fees for international students immediately discounted this option.

He also learned he could apply for work but in order to accept the job he needed to find an employer to sponsor his visa. He quickly discovered most employers wanted to hire only EU citizens or people on Stamp 4 permission.

“For two years I’ve been receiving all kinds of calls for job interviews. Last month, I was getting a job interview almost every week but by the end of the interview, when I tell them about my stamp, that’s it.”

Jeremiah became frustrated and started to consider returning to Nigeria. “I really wanted to go back but our Nigerian neighbours said it was not good to just leave. And what was I going back to? My business had already been sold. I’d have to start all over again.”

At this stage, I’m doing all this for my children, not for myself. It’s a big sacrifice on my part but I know their own future is more important

Shortly after Jeremiah arrived in Ireland, Olaitan became unexpectedly pregnant and gave birth to her second son at the end of the year. The family continues to survive off her stipend and sometimes use food vouchers from St Vincent de Paul for the weekly shop. They now live in Athy, Co Kildare, and Jeremiah has completed a course in IT support training which he hopes will help him find work.

He was recently offered a job in Dublin, but it was withdrawn after the employer discovered the sponsorship process would take three months to complete. He does not know whether the family will stay in Ireland once his wife completes her studies next year – it depends whether she’s offered work or not.

“I know there are a lot of opportunities in Ireland, the problem is just the stamp issue. I’d like to start my own business and there are so many back doors for doing that but I don’t want to use the back door. I want to do it the right way. That’s why I’m stuck in this situation.

“At this stage, I’m doing all this for my children, not for myself. It’s a big sacrifice on my part but I know their own future is more important. I’m just hopeful that the right opportunity will come. That’s what keeps me going.”