‘In Ireland I’ve found another form of persecution’

New to the Parish: Athmane and Nora Yachir arrived from Algeria in 2014 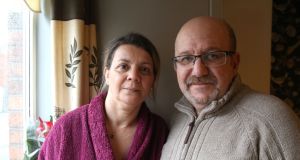 Athmane and Nora Yachir had only spent 10 days in their Belfast home off the Ormeau Road when the ceiling of their livingroom collapsed. Nora was sitting on the couch reading a magazine when she noticed flakes of plaster had started to fall from above. Suddenly she heard a loud noise. She jumped to her feet intending to run into the hallway but slipped, falling on to her lower back. Seconds later the ceiling fell in.

While Nora avoided the worst of the debris, she badly injured her back. Five years later she still walks with crutches. The Yachirs arrived in Belfast a few months before the collapse.

Originally from Algeria, Athmane started fearing for his safety in late 2013 when, he says, he and a colleague received threats from Muslim extremist groups for working with an alcohol sales company.

Describing her family as “moderate Muslims”, Nora says she also received abuse for not wearing the hijab, while their son was bullied at school for his parents’ beliefs.

After Athmane’s colleague was shot dead, he decided to leave the country and travelled to Morocco. From there, he boarded a ship and spent the following 10 days hiding below deck with a group of stowaways. He believed he was en route to England, and then London, but instead was dropped off at Belfast harbour.

Back in Algiers, Nora had taken their 13-year-old out of school and spent weeks moving between the homes of friends and families while awaiting news from her husband. “Even in the homes of friends we couldn’t spend more than three nights – it was possible we would be located,” she recalls. “We did that for two months. It was very hard.”

Asked why he chose to leave North Africa in secret rather than, like his wife, applying for a visa to travel, Athmane says he needed to get out as quickly as possible. “I wasn’t able to wait for anything. I didn’t have the time to gather the papers.”

The floor of our bedroom on the first floor was caving in over the livingroom, so we told them there was a problem

In November, Nora and her son flew to Belfast to join Athmane, who had already applied for asylum. Under the Northern Irish asylum system, the family was initially put in emergency housing before they moved in to a small house in late 2014. The couple immediately noticed cracks in the ceiling of their livingroom and raised the issue with a housing representative.

“We weren’t looking for luxury – we just wanted a safe and clean apartment,” says Athmane. “The floor of our bedroom on the first floor was caving in over the livingroom, so we told them there was a problem. The heating also didn’t work. It was very cold.”

Following the collapse, the family was immediately moved in to a new home, where they awaited a decision on their asylum claim and received a weekly allowance of £36.95 per person. Unable to work, Athmane became increasingly frustrated, while Nora regularly had to visit the doctor for her ongoing back pain.

After the couple’s initial claim for asylum was rejected in 2016, they made a fresh application for protection under the European Convention on Human Rights. In January 2018, while this second application was still pending, they received a letter saying their financial and accommodation support from the UK home office was to be cut off.

A few weeks later their son arrived home, to discover black plastic sacks outside the home. “This guy had opened the door of our house and taken our personal belongings and put them in bags on the streets,” remembers Athmane. “We were not in the house at the time, but our son called to ask what was going on.”

He says the man, who had changed the locks, handed over the keys only when a friend of the family called the media to report on the incident. The family’s financial support was reinstated a month later, but has been periodically withdrawn and restored since.

In September 2019, Athmane received another letter stating that the financial support would end. He appealed the decision in court but the home office again refused to reinstate the money. For two months the family relied on £20 weekly hardship payments from the Red Cross until the UK immigration office contacted the family saying they had decided to reinstate the section 4 financial support.

Meanwhile, Nora was awarded compensation for her injuries last year after taking a case against the former housing body for her injuries. The family has not yet been unable to access the money.

Their son will sit his A-levels this year and hopes to study criminology at university. Athmane says he would prefer to work rather than rely on handouts but is unable to access the labour market until the family receive permission to remain.

The couple no longer receive weekly cash payments, just the Aspen payment card which covers the cost of food and other essential items. Nora says that having to rely on this card is “truly humiliating”.

“We can only use the card in certain shops,” says Athmane. “For example, there is a big shop in Belfast that sells halal meat but we can’t pay using the card there.”

He says the home office should take greater responsibility for his wife’s back injury. “She is permanently injured, and the home office was indirectly involved in her injury. Instead of repairing this problem, they’ve created more problems for us. They should know that.”

“We’ve built a life here but we’re still strangers. I don’t want £70 a week, I want to work and pay taxes. They have us living like beggars.”

While they are happy in their current house they recently went 10 days without hot water after their gas meter was vandalised. Mears Housing Management, which took over the housing portfolio for asylum seekers in Northern Ireland in late 2019, provided the family with temporary heaters while the water was off. It later apologised in a statement to The Irish Times for the delay in resolving the issue and said “lessons had been learned from the incident”.

Asked to comment on the Yachir family’s situation, a spokesman for the UK home office said it did “not routinely comment on individual cases” but that the wellbeing of asylum seekers was taken “extremely seriously”.

“The Home Office supports asylum seekers until their claims and appeals are fully determined,” he said. “We demand the highest standards from our contractors and their accommodation and monitor them closely to ensure this is maintained. Where this falls short we have robust procedures in place so any problems can be reported and investigated.”

The couple are hugely grateful to the Irish friends they’ve made, particularly Athmane’s former English teacher and her husband, and an older lady Nora has befriended in a nearby retirement home.

“The people here have helped us a lot. We’ve been blown away by their support,” says Athmane. “It’s just the Government is the problem.”

“I was persecuted in Algeria so I fled that country but here I’ve found another form of persecution. I worked all my life in Algeria. I earned my money there. So let me work here. I don’t want your charity.”