Then I decided that another was required, so I popped in to a GAA dinner dance 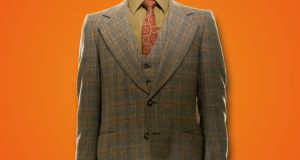 My new suit lay on the bed, but I was in my underpants, finishing off the pint. Photograph: iStock

I was sorry I didn’t bring my new suit to Warsaw. At the time it wouldn’t fit in the suitcase. I bought it in Derry just after Christmas in a shop called Tomorrows Menswear.

“That’s a good name for your shop,” I said to the man with the measuring tape around his neck who was sizing me for the suit.

“My name is Morrow,” he said, “and my father came to the city to work in the drapery business many decades ago; that’s why I chose the name Tomorrow.”

The young women were radiant in long dresses and the boys circled them like nervous whippets with awkward gangling bodies, and oily hair

I like drapers. They had money in the old days when nobody had money, and they heard a lot of confessions and did a lot of kindnesses that nobody noticed. The drapery shop was the place people went to for big occasions; before a wedding or a funeral, or before heading off to America or Scotland.

There was a draper in Killybegs who was famous for the discreet method of his discount. Sometimes when a poor man stood before him, requiring a suit for an important occasion but too proud to ask for any reduction, the draper found a solution. The suit would be wrapped up, the poor man would fork out the money, and go home with the suit, only to find, as he tried it on before the mirror, that the draper had slipped a few pounds into one of the pockets. The story is still told in the town of Killybegs with great affection.

I ended up in Killybegs on the same day as I bought the suit in Derry and I walked along the pier admiring the big fishing boats that bring in millions of euro to the town.

Later I checked into the Bayview Hotel and I brought a pint up to the room on the top floor where I had a view of the glittering Christmas lights on the boats at the pier.

My new suit lay on the bed, but I was in my underpants, finishing off the pint.

Then I decided that another libation was required, so I put on the new suit and went down in the lift.

But I landed accidentally on the middle floor where a GAA dinner dance was in full swing, and I was already tight from the first pint so I thought I’d pop in and have a look around.

The young women were radiant in long dresses and the boys circled them like nervous whippets with awkward gangling bodies, and oily hair. I felt like Oisin; an old man among the young.

But as I was about to order a pint at the bar two women came over to me and said, “Do you realise this is a private party? You need to pay at the door.”

I turned around and saw a lady sitting at the door with a small cardboard box collecting money.

So I apologised and fled.

“That’s a fine new suit,” one of the women shouted after me.

“The label is still stuck to the arse of it,” she said.

But I didn’t bring the suit to Warsaw because I thought I’d need fleece tops and leg warmers and heavy cord trousers.

I arrived with a case load of woollen underpants and thermal vests and a variety of insulated jackets that a person might require on the back-end of a high mountain. Except that Warsaw was enjoying mild weather. The apartment toasted my bones so well that I could walk around half naked, and when I went out wearing all my thermal underwear I got far too hot.

I’ve been here during previous winters when the temperature was so far below zero that it was painful to inhale on the open street, without a scarf to mask my mouth. But this year I can sit on park benches and enjoy the sunshine. So eventually I headed for the Carrefour supermarket to buy a few light briefs and vests.

What frightens me about Carrefour in Warsaw is the number of security men that patrol the mall just beyond the checkouts. And since I hadn’t shaved or manicured for three months I wasn’t surprised when I was stopped. Although I had the receipt in my breast pocket, and as the security man scrutinised it with the gravity of a border guard on the Ukraine frontier I caught sight of my bedraggled self in a wall mirror, and I could only regret once again, that I left such a lovely suit behind in Ireland.