‘In Ballyhaunis there were Arab people all around me’ 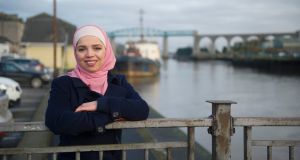 Ghada Feddawi was living and working in her hometown of Aleppo in Syria when she discovered she’d been selected by the Irish Government to relocate to Ireland. A beneficiary of the Syrian Humanitarian Admission Programme, the primary school teacher arrived in Ireland with her brother in May 2015 after their sister, who had already lived in Ireland for more than a decade, applied for permission for her siblings to join her in Co Mayo.

Having studied English literature at university she looked forward to finally practising her language skills in an English-speaking country. Instead she found a tight-knit Syrian community where people greeted each other in Arabic.

I thought to myself: I can finally practise my English – but instead there were Arab people all around me saying ‘salaam’

“When we first arrived my sister picked us up from Dublin Airport and we went straight to Ballyhaunis. I thought to myself: I can finally practise my English – but instead there were Arab people all around me saying ‘salaam’. It was a small town and many of the Arab families had come in the 1980s. I found myself in a totally different place but the social connection was the same.”

After four months in the west, Feddawi and her brother moved east to be closer to Dublin. Two months later they were granted refugee status and started looking for work.

Aside from teaching in Syria, Feddawi had worked as a volunteer with humanitarian organisations before moving to Ireland. “I’m from west Aleppo and at the beginning of the war all the damage was in the east. I found myself thinking I should be doing work to support people. I was working with families in crisis by creating fun events for children in deprived areas and to develop a sense of normality in a happy, relaxing atmosphere. We all came from the same country, we had an obligation to support each other.”

Feddawi recalls how shop owners would continuously attempt to rebuild their lives and businesses after every attack on the city. “Everyone wanted to keep going even though there was destruction. I come from a city that was full of life in spite of the crisis around us. Syrian people do not close their shops until 11pm, we are addicted to work.”

After securing her refugee status in Ireland, Feddawi was eager to get back into humanitarian work and find a job with an NGO. However, she struggled to secure full-time employment and eventually decided to return to college where she enrolled in the Dublin City University MA in refugee integration.

“I decided to study this masters wishing to answer my research topic about how refugees and asylum seekers get involved in labour markets. It hadn’t been easy for me to find a job and all the people around me were just as eager to find work. I asked myself, what does refugee integration mean to me? It means people finding a job, learning a language and being socialised. I wanted to try and answer those questions.”

Through her studies, Feddawi found plenty of reports that depicted asylum seekers as “a burden on host societies and dependent on welfare benefits rather than positive contributors to society”.

“I believe all these native portrayals leads to the economic marginalisation of refugees and that affects their social resilience and well-being,” she says.

Feddawi’s research also brought her to direct provision centres around the country where she met people eligible to work under the new 2018 legislation but unable to find positions. “One woman told me she’d spent all her money on getting transport to job interviews. I realised a website where people could register their details would be easier.”

She decided to design a site as part of her masters thesis which would link up refugees and asylum seekers looking for work with employers seeking to hire new people. Users of the employrefugees.com site, which Feddawi launched about five months ago, must provide personal information, a list of educational and professional qualifications and a description of previous work experience. Employers can also register their businesses on the site.

While Feddawi came up with the concept for the site it was her Irish husband, who she met after moving here, who created the web design for the platform. The couple married in 2017, just four months before her parents arrived in the country through family reunification. “I had applied for my family to come here but I didn’t know how long the process would take. My husband said we’ll go ahead and do the wedding but then they arrived soon after.”

People can get really depressed. They travel to another country with all this experience and want to work and prove themselves

It was only after her parents and two younger sisters had arrived safely in the country that Feddawi finally felt at ease with her new life in Ireland. “Even thinking about it now, it wasn’t easy here without them. You can’t settle when your family is so far away.” She says her parents, who now live in Dublin, found it easier than most refugees to start over as they both speak English.

Feddawi recently graduated from her DCU masters degree and is now focusing on expanding her website around Ireland. She says a business owner friend in Co Louth has started spreading the word to employers and also plans to advertise the site at job fairs. She has advertised through posters in direct provision centres and says a growing number of job seekers are registering each day.

Without work, people quickly become deskilled and lose all self-confidence in their professional abilities, she says. “People can get really depressed. They travel to another country with all this experience and want to work and prove themselves.

“Some people think refugees come here to take the country’s resources; that they’re depending on welfare. Yes, it’s handy for a certain time until people get settled but after a while, especially when you get your status, you don’t want to be on welfare support.”

Feddawi still hopes to find full-time work with an NGO but in the meantime will dedicate her time to the website. “My hope is just to spread awareness and that the website can be a growing hope for lots of people. I myself came to Ireland to establish a new life. I faced challenges during the beginning of my residency on how to use my education and vocational background in Ireland. We don’t want to be a burden on people. We want to work.”

What sold for about €500k in Ballsbridge, Dalkey, Sallynoggin and Lismore
5