‘In Ireland, if you’re not rich but work hard you can get a job easily’

New to the Parish: Penny Pu arrived from the city of Dalian, in northeast China, in 2000 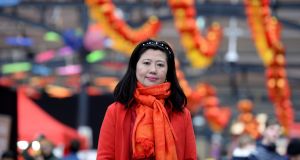 Penny Pu, the founder of the Chinese cultural association at the Smithfield fruit and vegetable market where the group is holding an event to mark the Chinese new year. Photograph: Alan Betson/The Irish Times

On Penny Pu’s second afternoon in her new Irish home she received some unexpected visitors at the door. The young Chinese student had just arrived home from her first morning of English language classes in Malahide when the doorbell rang. She was surprised to discover a group of excited five-year-old girls waiting for her on the doorstep.

“They had come to look at me and touch my hair; they’d never seen such black hair. They were all neighbours and every day after school these little girls would come and visit. They’d never seen a Chinese girl before so I was special.”

“I think at the time there were only a few hundred Chinese students here. Ireland wasn’t a very popular country for people from China. Most went to America, Canada, Australia or the UK.”

'I was feeling scared and didn’t know anybody. I had no friends or family here, I had no idea how good or bad it would be. Malahide was so different to China'

Pu was 23 when she decided to move abroad. Having already studied English at university – along with Japanese – she was eager to further improve her linguistic skills. Ireland became an option after her mother’s friend arrived home from a trip to Europe and recommended the small western European island as a friendly, safe place to study.

Pu’s parents were reluctant to let their only daughter move so far away and initially rejected the proposal. Her father, an army officer, refused to accept the benefits of living abroad. “He was very angry with me at the time and said ‘no, China is a huge country, why do you want to go outside? My whole family refused my decision at first but in the end my parents said I could come for three years.”

Pu arrived in Dublin in November 2000 and moved in with a host family in Malahide. She had already selected “Penny” as her English language name before travelling on the advice of a university professor. Her Chinese name is Ying which was chosen by her mother because she believed her daughter would grow up to be an intelligent woman.

The young student initially felt overwhelmed by the cultural differences between life in the bustling city of Dalian in northeast China and the slower-paced, north Dublin suburban lifestyle. “I was feeling scared and didn’t know anybody. I had no friends or family here, I had no idea how good or bad it would be. Malahide was so different to China. At home there were high mountains everywhere and big buildings but in Ireland everything was smaller.”

After six months with her host family, Pu moved to the city centre and applied to study law at the Dublin Institute of Technology (now TU Dublin). After three years in the country she told her parents she had decided to stay. By this point she was working as a legal assistant at a Dublin law firm and had married her boyfriend who was also from China.

“I told them I had a residence card which was like the green card of this country and was happy to stay. I wanted to practise my legal career and said I’d visit every year. My parents were not happy but they said if you want to settle there, it’s up to you.”

In 2005, Pu set up the Chinese Cultural Association to help promote Chinese new year festivities. She also went on to become a community leader for the Chinese embassy in Dublin and provided support to Chinese nationals struggling with housing or visa situations.

'If you’re not rich but have different talents and work hard you can get a job easily. I find that Ireland is fair to everyone'

She notes that while many Chinese people come to Ireland to learn English, those who come purely for work often don’t have the chance to properly learn the language. “If someone studies here they’ll have no problem with communication but maybe ten per cent can’t speak so well. It depends on where you work too. Those in construction might only know English to hear.”

The association’s work has grown considerably over the years and it now partners with Dublin City Council each year to promote arts and culture over the Chinese new year. “We have a two-day celebration with about 20 performances and a food market this year. We have Chinese traditional instruments for sale, Chinese traditional dancing and Chinese dresses on display.”

Pu qualified as a solicitor in 2011 and more recently trained to become an arbitrator at UCD. She specialises in immigration law and currently works with Chinese companies investing in business in Ireland. She believes Ireland is a welcoming country to foreigners and is very supportive of the State’s Immigrant Investor Programme (IIP), which offers Irish residency to non-EEA nationals in return for a minimum of €1 million investment.

The IIP was introduced in 2012 and now receives hundreds of applications to Ireland every year. However, this visa service for the wealthy, known international as “golden citizenship”, has been criticised for devaluing the concept of citizenship and exacerbating inequality between rich and poor visa applicants.

Pu believes the IIP will bring important financial growth to the country and help promote Ireland abroad. “In the beginning it was just Chinese students coming here, and now we have about 1,000 rich Chinese families here. They bring financial opportunity to Ireland. Irish immigration law is very open to rich people.”

She adds that Chinese nationals without money are also welcome in Ireland as long as they bring transferable skills. “If you’re not rich but have different talents and work hard you can get a job easily. I find that Ireland is fair to everyone.”

Pu still visits China at least once a year and sends her son Boris, who is now 18, back to her parents every summer. Boris has also attended a summer camp in China where Pu hopes her son developed an appreciation for his Chinese heritage.

Pu recently qualified to teach Chinese and plans to set up a Chinese language school in Dublin which she hopes will attract parents with children studying the language at Leaving Certificate. She continues to work with the Chinese Cultural Association and hopes to see further collaboration with Irish businesses around the new year celebrations.

Twenty years on, is she happy she chose to stay in Ireland? “Life is very different here of course but I’ve learned so much from Irish people. I’ve studied here, I work here, I have Irish citizenship. Irish people are very warm and keen to make friends with you so I’m happy.”