Hot Yoga: Sure what else would I be doing? And it saves on heating bills

Conor Pope: Of all the fads I have tried, it’s the one that leaves me feeling best about myself 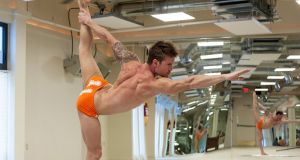 Hot Yoga is a discipline not for the faint of heart File photograph: iStock

I first decided to give up Hot Yoga after a balding man with a ridiculous ponytail and tight Speedos stroked my head with his sweaty foot.

I retired from it a second time after it caused my better half – who I’d convinced to join me – to throw up in a carpark near the studio after her first class. And I knocked it on the head for a third time when a colleague joined a different studio I’d started going to. I got on well with this chap, but workplace collegiality should never extend to naked locker room banter after 90 minutes of inelegant stretching in an over-heated room in a grim-looking industrial estate in the middle of nowhere. So it was him or me. And it happened to be me.

In case you don’t know – and let’s face it, there’s a good chance you don’t – Hot Yoga is a demented form of yoga which sees very sweaty people tie themselves in improbable knots in a smelly room heated to just over 40 degrees, all in the name of good health.

The idea is based on a notion that a roasting yoga studio makes the body more supple and better able to reach deeper postures.

I’ve no idea if this notion is true but it hasn’t stopped me spending a lot of money on classes. Nor has it stopped me giving it up repeatedly over the last decade.

Just before Christmas, I was back in the game. Generally speaking, I don’t believe in new year’s resolutions as – in my experience – all promises made at that time of year are as doomed to fail, as are all attempts at hangover-induced reinvention.

I looked at my knees. They could scarcely have been further from my armpits

So this year, I decided to steal a march on time by setting out a path to a new me a full three weeks before the first of the Auld Lang Synes were sung. And I went back to Hot Yoga because of all the fads I have tried – and I’ve tried many – it’s the one that leaves me feeling best about myself after I’ve done it, despite the fact I am spectacularly useless at it.

This time out, I signed up for a class in a city-centre studio with a start time of before 7am. I hauled myself out of bed in the dead of night and made my way into town, delighted to have remembered water and a towel. My delight was tempered when I realised I’d packed a child’s Finding Nemo hooded towel by mistake.

Burning sticks of incense at the studio door masked the smell of stale sweat in a room illuminated by nothing brighter than one of those weird salt lamps that are supposed to have healing properties.

My fellow classmates – all of whom looked alarmingly young and bendy – were lined up in rows doing breathing exercises. I positioned myself far from all feet to avoid any of the unpleasantness I’d previously experienced.

A chirpy instructor came in. “It’s an early morning class so only the most committed have made it,” she said. I patted myself on the back mentally as the heater above my head blew hot air furiously into my face.

Five minutes in and I realised Hot Yoga was not like riding a bike and despite having attended many classes in the past, I was all at sea and melting. I fought with the Awkward Pose and the Balancing Stick and was suddenly incapable of straightening my legs.

“Lock your knee. Your knees are locked,” she shouted. My classmates stood steady. My knees wobbled like jelly.

They are only ever locked along with the rest me, I thought.

Some 40 minutes into the class I was delighted – if somewhat surprised – to get praise from the instructor.

“Well done, Conor, that’s a fantastic recovery,” she said as I rebalanced myself after falling out my tree pose. Seconds later, there was more. “That is great strength there Conor.”

It is great strength, I thought as my limbs freaked out about the knots I was trying to tie them in.

“That’s really great work, Conor, well done. Your knees are just touching your armpits and soon they will be past them.”

What? I looked at my knees. They could scarcely have been further from my armpits. And to be honest, I was happy with that. I’ve never seen an ability to get the two to meet as a desirable life skill.

Confused, I looked around and realised that for the whole class, the instructor had been addressing an entirely different Conor behind me. A good Conor. I was a bad one, one who had got no encouragement at all and didn’t deserve it.

Deflated, I finished the class and showered and as I left the instructor stopped me. “You found it hard, I can tell,” she said. “But it gets easier. You should come back.”

I probably will. Sure what else would I be doing in January? If nothing else, it’ll save on my heating bills.